Ross Perot, Former Presidential Candidate In 1992, Passed Away At age 89 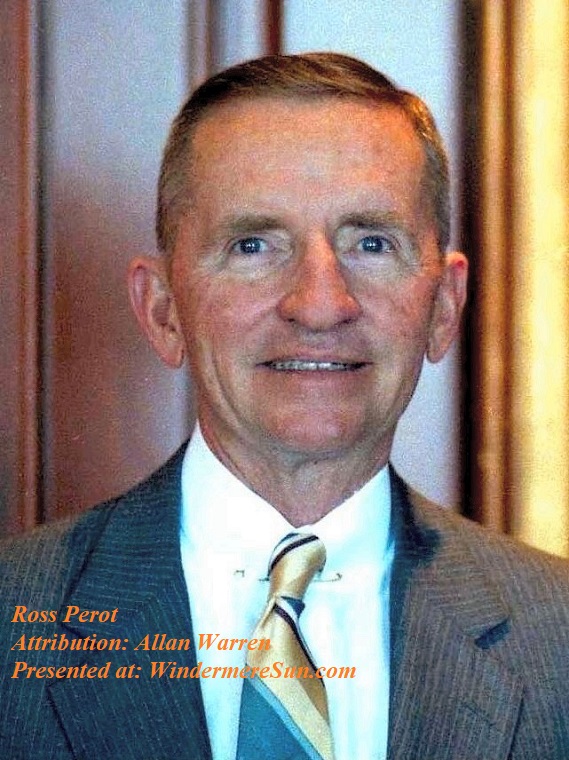 Ross Perot, an icon of his time, best know for being a presidential candidate in 1992, passed away yesterday, on July 9, 2019, at age 89 in Dallas, Texas, after a battle with leukemia. Below is an excerpt from wikipedia, in italics, about Ross Perot:

Born in Texarkana, Texas, Perot became a salesman for IBM after serving in the United States Navy. In 1962, he founded Electronic Data Systems, a data processing service company. In 1984, General Motors bought a controlling interest in the company for $2.4 billion. Perot established Perot Systems in 1988 and was an angel investor for NeXT, a computer company founded by Steve Jobs after he left Apple. Perot also became heavily involved in the Vietnam War POW/MIA issue, arguing that hundreds of American servicemen were left behind in Southeast Asia after the Vietnam War. During President George H. W. Bush‘s tenure, Perot became increasingly active in politics and strongly opposed the Gulf War and ratification of the North American Free Trade Agreement.

In 1992, Perot announced his intention to run for president and advocated a balanced budget, an end to the outsourcing of jobs, and the enactment of electronic direct democracy. A June 1992 Gallup poll showed Perot leading a three-way race against President Bush and presumptive Democratic nominee Bill Clinton. Perot briefly withdrew from the race in July, but re-entered the race in early October after he qualified for all 50 state ballots. He chose Admiral James Stockdale as his running mate and appeared in the 1992 debates with Bush and Clinton. In the election, Perot received 18.9% of the popular vote, but did not win any electoral votes. He won support from across the ideological and partisan spectrum, but performed best among self-described moderates. Perot ran for president again in 1996, establishing the Reform Party as a vehicle for his campaign. He won 8.4% of the popular vote against President Clinton and Republican nominee Bob Dole.

Perot did not seek public office again after 1996 and did not enter the 2000 Reform Party presidential primaries. He endorsed Republican George W. Bush over Reform nominee Pat Buchanan in the 2000 election and supported Republican Mitt Romney in 2008 and 2012. In 2009, Dell acquired Perot Systems for $3.9 billion. According to Forbes, Perot was the 167th richest person in the United States in 2016.

From 1992, Perot was a pro-choice activist, and a strong supporter of Planned Parenthood. He stated poorer women in particular should have access to abortions via federal funding. From 2000, he was pro-choice reluctantly.[57]

MSNBC’s Steve Kornacki discusses the life and political legacy of Ross Perot, the billionaire business magnate who twice ran as a third-party candidate for president. Perot died Tuesday at the age of 89, in the video “How Ross Perot Ushered In A New Era Of Politics, Morning Joe, MSNBC“, below:

H. Ross Perot, the colorful, self-made Texas billionaire who rose from a childhood of Depression-era poverty and twice ran for president as a third-party candidate, has died. He was 89. Here are some of the more memorable moments of his career, in the video “Watch Ross PErot’s most memorable moments“, below:

Perot was a self-made billionaire business magnate who twice ran as a third-party candidate for president. He died Tuesday at his home in Dallas surrounded by family, in the video “Ross Perot, Former Presidential Candidate, Dead At 89, NBC Nightly News“, below: