Our Future With Robots 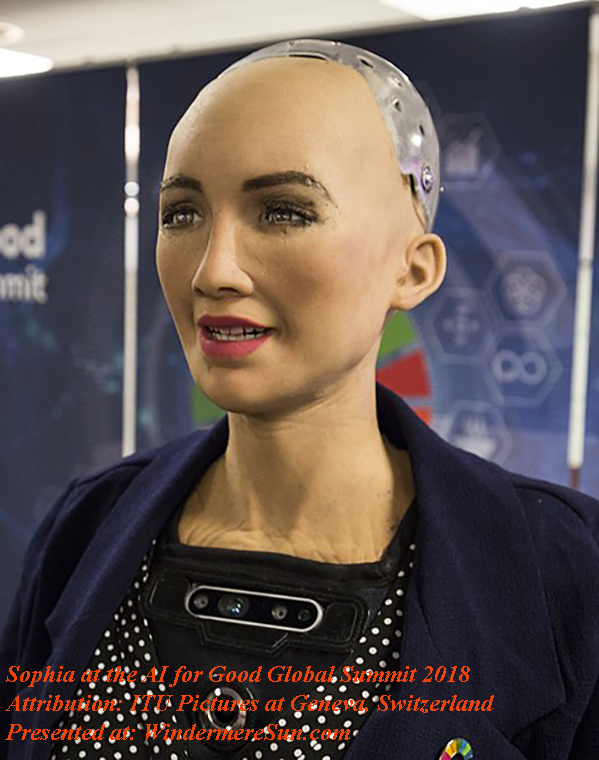 Remember Sophia’s duet with Jimmy Fallon? To create Sophia’s singing voice Hanson Robotics joined up with CereProc, a text to speech (TTS) technology company that creates synthetic voices with character and personality, in the video “The Making of Sophia: Sohpia’s Singing Voice“, below:

It’s time for Holly and Phil to meet Sophia, one of the most intelligent robots in the world. Using artificial intelligence, Sophia can communicate with people and even use facial expressions to convey emotions – looking eerily human as she does so. Sophia, who’s a UN Ambassador and even holds citizenship, prepares a drawing of Holly & Phil and joins us in the studio alongside her creator, Dr David Hanson, in the video “Phillip & Holly Interview This Morning’s First Robot Guest Sophia, This Morning“, below:

Hanson Robotics Limited’s Ben Goertzel, Sophia and Han at RISE 2017. Now for something that’s never been done onstage before. While they may not be human, our next guests are ready to discuss the future of humanity, and how they see their types flourish over the coming years, in the video “Two robots debate the future of humanity“, below:

Ben Goertzel joins Sophia The Robot and Han The Robot on stage! Robot intelligence becomes more impressive with each passing year, but when will AI actually surpass humans? In the video “Determining when robots will rule the world- Ben Goertzel“, below:

Sophia travels to Palm Beach, Florida, to meet with Tony Robbins during our Date With Destiny event — and Tony did not hold back on asking some tough questions! Here are some highlights from their conversation where they talked about everything from how Sophia’s makers have influenced and shaped her A.I., to their shared commitment to helping humans experience a better quality of life! In the video “Meet Sophia, World’s First AI Humanoid Robot, Tony Robbins“, below:

Since the beginning of Hanson Robotics Limited, our robots have served as platforms for scientific research, art, education and public outreach. We have deployed dozens of robots to universities and museums and collaborated with notable researchers, artists, and companies, in the video “Sophia the Robot Gives a Glimpse of What’s to Come in 2020 #Sophia2020“, below:

To continue our series exploring the COVID-19 pandemic and how it has impacted the state of the world, we’re exploring how artificial intelligence can help us monitor, create, and recover, in the video “Neil deGrasse Tyson and Sophia the Robot Explore COVID-19 and Artificial Intelligence“, below: