What To Do About The Crisis At The Border 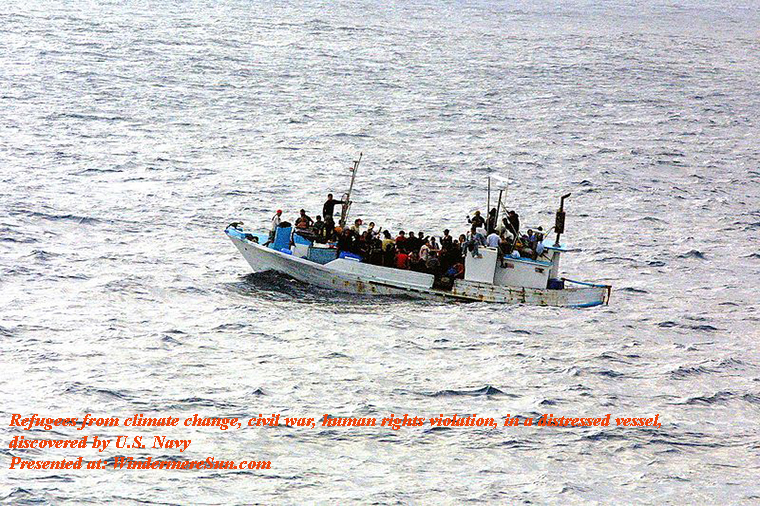 Refugees in a boat (escaping from climate condition, civil war, and human rights violations (Attribution: an employee of U.S. Navy, Presented at: WindermereSun.com)

The Trump administration admits its own migrant detentions centers are a crowded health risk with one senior DHS official saying it is a “ticking time bomb.” House Judiciary Chairman Nadler says “all the people in the administration” who permitted inhumane conditions at the detention facilities are “guilty of child abuse…a crime.” in the video “Shocking Photos Show ‘Ticking Time Bomb’ In Trump Migrant Centers, The Beat With Ari Melber, MSNBC” below:

US Customs and Border Protection officials say they are investigating “disturbing social media activity” after a published report of a closed Facebook group for current and former Border Patrol agents that reportedly features jokes about migrant deaths, derogatory comments about Latina lawmakers and a lewd meme involving at least one of them, in the video “Border Patrol agents under fire for disturbing Facebook posts“, below:

White House Deputy Press Secretary Hogan Gidley defends Customs and Border Patrol agents after Alexandria Ocasio-Cortez’s visit to the southern border July 1. Gidley points out that Ocasio-Cortez voted against funding that would aid in improving the humanitarian crisis at the border. Gidley also talks U.S. tensions with Iran, trade tensions with China and Trump’s plans for the July 4th celebration in Washington, D.C., in the video “Hogan Gidley blasts Ocasio-Cortez for inaction on border crisis“, below:

Tom Friedman travels from France to Niger, following the trail of migrants and unraveling how climate change is driving people to leave their homes, in the video “Climate Change and the Migrant Crisis, Years of Living Dangerously“, below:

I repeat: If President Trump does not want these migrants to come to United States to seek refuge, then the best solution is to send foreign aids to Central American countries such as Guatemala and establish policies and measures to help slow down Climate Change, to speed up vigorous transition toward renewable energy.  Climate Change has already created  millions of Climate Refugees. Those of us in the industrialized or developed nations have a moral duty to help these climate refugees for we have all contributed much to climate change.

Take a look at how climate change and the rising sea level will affect New York City in the future with Josh Fox, the Oscar-nominated filmmaker behind “Gasland” and the new film “How To Let Go Of The World.” in the video “How Climate Change Could Drown New York City, Vanity Fair“, below:

If we don’t hurry up and slow down climate change, millions and millions more climate refugees will be showing up at the border of many nations.

Time to transition into using renewable energy and EV aggressively!