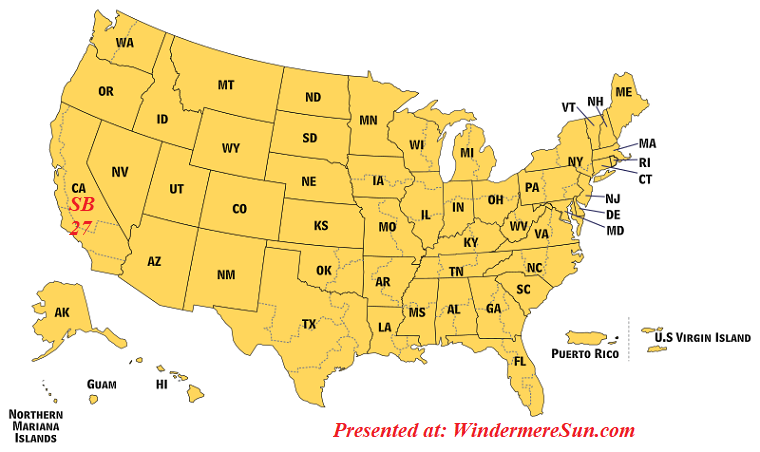 Map of the United States, with CA SB27 (Presented at: WindermereSun.com)

In the past forty years, every single United States President since former President Jimmy Carter, Democrats or Republicans, have released their tax returns, until President Trump took office. Since transparency of government is a nonpartisan issue, the California State Senators Mike McGuire and Scott Wiener reintroduced legislation this year that would require all presidential candidates to release their tax returns prior to being placed on the California ballot. This bill, SB 27, was approved in the Senate Elections and Constitutional Amendments Committee and was endorsed by California Secretary of State Alex Padilla in March of 2019. Included in this Presidential Tax Transparency bill is an urgency clause so the legislation would take effect immediately, prior to the filing deadline for 2020 Presidential candidates.

Senator Mike McGuire said, “President Trump’s refusal to release his income tax returns has broken a time honored, bi-partisan tradition which has weakened our democracy and his jaw dropping business conflicts have now put the security of our nation at risk…. There’s a lot at stake and there are serious, pressing questions that need to be answered before Election Day, which is why Senator Wiener and I are advancing this critical transparency bill.“

Senator Scott Wiener said, “The President’s refusal to share his tax returns with the American people goes against longstanding transparency norms and undermines the trust between government and those it serves….We deserve to know that the President is in fact acting for the good of the people and not in his own monetary self-interest.“

The Presidential Tax Transparency & Accountability Act will require basic tax information to be shared with the California public and require that all presidential candidates release the last five years of their tax returns in order to appear in the California ballot. The returns would also be made available to the public on the Secretary of State’s website.

In the video of Feb., 2019, “House Democrats hold first hearing on presidential tax returns: The House Ways & Means Committee” below:

California may keep President Donald Trump off of next March’s California Presidential Primary ballot, unless he discloses five years worth of tax returns to the Secretary of State. Matt Yurus reports, in the video “President Trump May Be Kept Off California Primary Ballot Unless He Releases Tax Returns“, below:

Contrary to Trump’s public statements that American people do not care about his tax returns, recent polls have shown that 63% of the Americans believe that Trump’s tax returns should be released.

In May of 2019, Senators Mike McGuire and Scott Wiener have also introduced amendments that would extend the transparency rules to the office of the Governor of California. California will now also require gubernatorial candidates in addition to the presidential candidates, to release their tax returns.