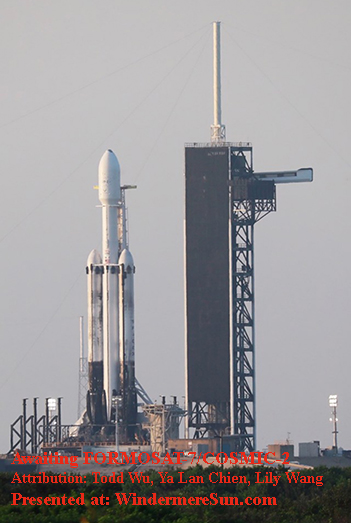 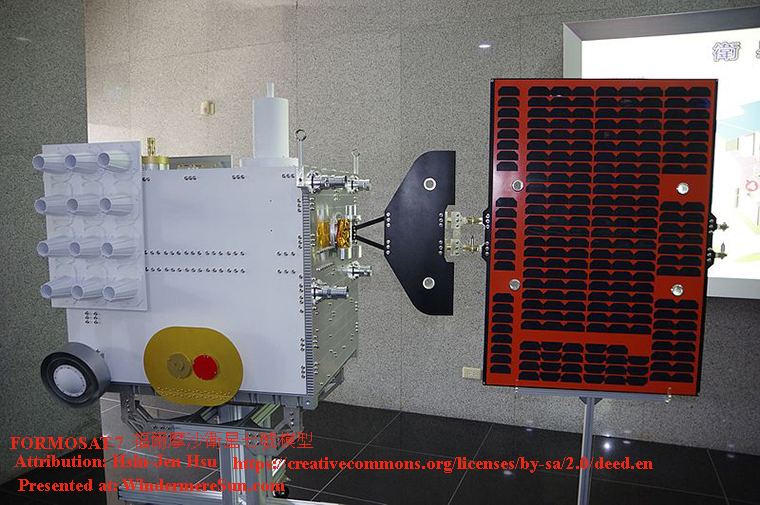 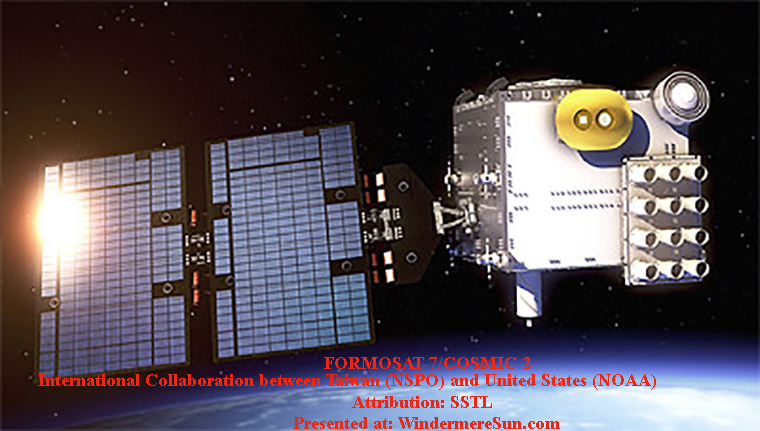 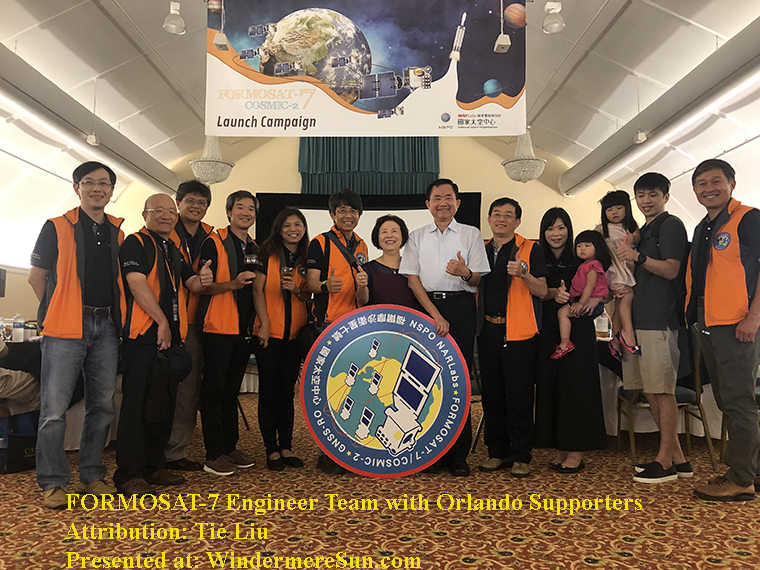 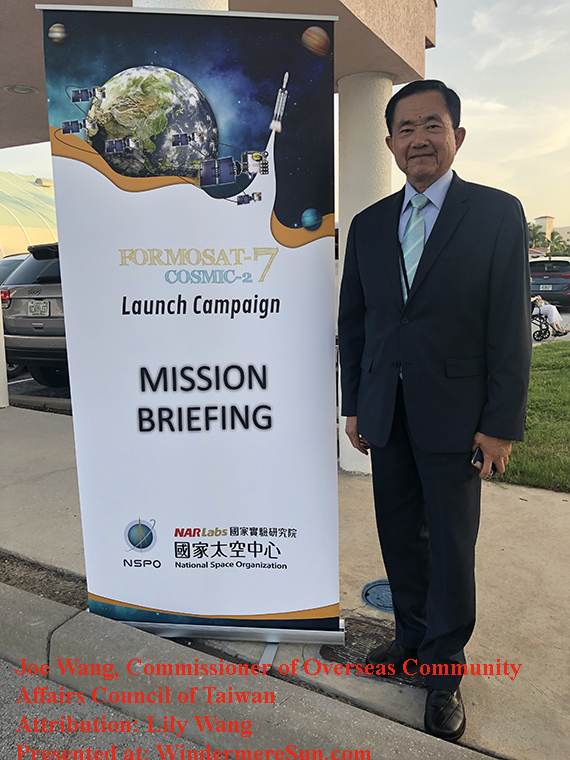 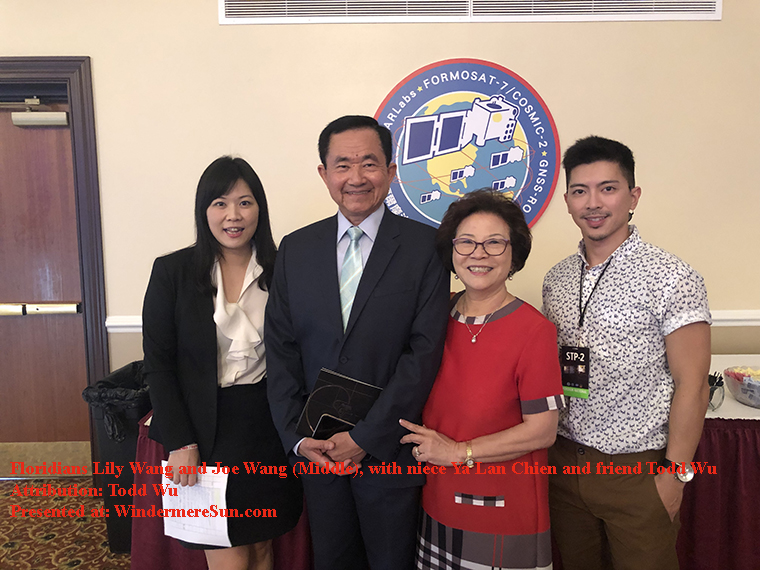 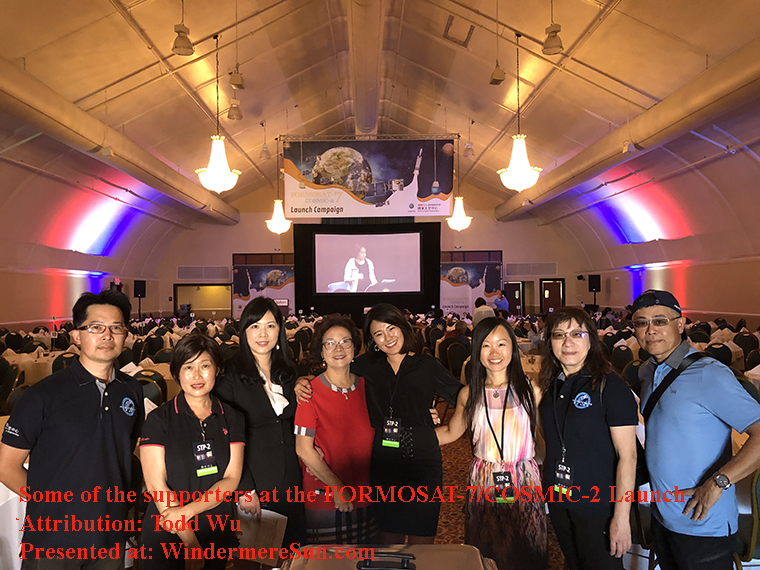 Some of the supporters at the launch campaign (Attribution: Todd Wu, Presented at: WindermereSun.com) 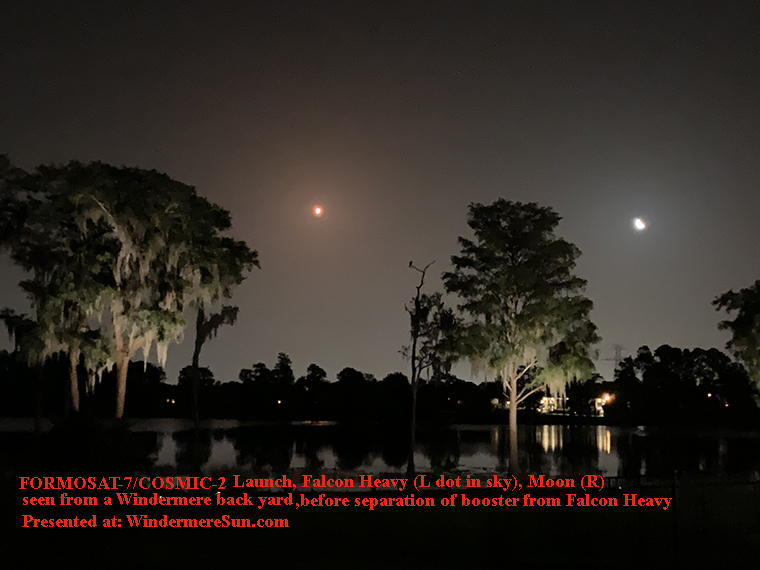 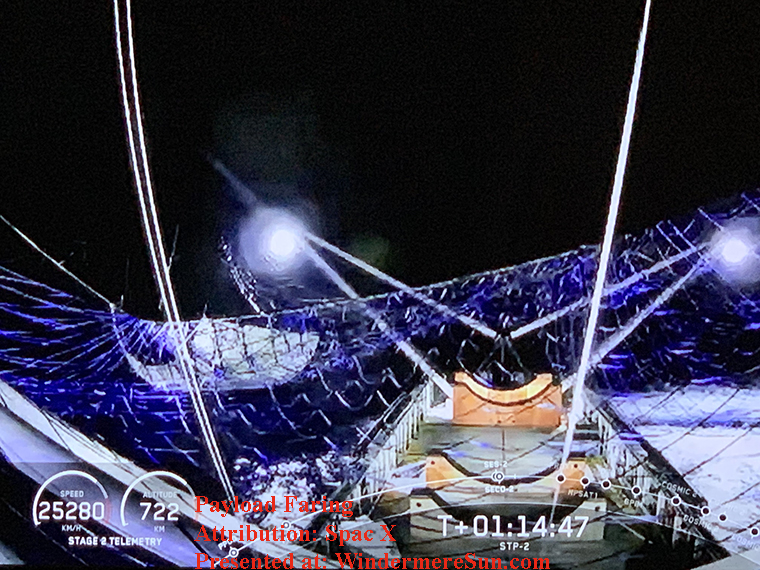 At about 2:43 a.m. on Tuesday, June 25, 2019, our house was rattled by the sonic boom coming from the Falcon Heavy launched by SpaceX from Cape Canaveral, breaking the sound barrier. It’s an exciting day for many Central Floridians, especially for those who originally came from Taiwan (such as Lily Wang, Joe Wang (Commissioner of Overseas Community Affairs Council of Taiwan), Ya Lan Chien, Todd Wu, etc.) because it is the launch day for FORMOSAT-7/COSMIC-2 (Constellation Observing System for Meteorology, Ionosphere and Climate).

SpaceX launched its Falcon Heavy rocket from Kennedy Space Center in Florida, carrying 24 experimental satellites in what Elon Musk‘s rocket company called one of the most difficult launches it has attempted. The craft blasted off to cheers from onlookers at 2:30 a.m. after a three-hour delay from the original launch time late Monday (June 24). The boosters separated safely and the craft began its six-hour mission to deploy the satellites, in the video below:

FORMOSAT-7 or COSMIC-2 is an international collaboration between Taiwan (NSPO) and the United States (NOAA) that will use a constellation of twelve remote sensing microsatellites to collect atmospheric data for weather prediction and for ionosphere, climate, and gravity research. It is a follow up mission to the FORMOSAT-3/COSMIC mission. The new constellation provides improved performance, precision, and greater number of measurements.

The FormoSat-7 satellite group was shipped out to the U.S. back in April, 2019. This group of satellites was jointly developed by the U.S. and Taiwan. It”s set to launch as early as June 22. Officials say that every precaution is being taken to ensure that the FormoSat-7 arrives safety. It will take over the FormoSat-3. It will collect weather data using state-of-the-art instruments to enhance weather forecast accuracy by at least 10%, in the video back in April of 2019, “FormoSat-7 satellite system shipped to US for launch“, below:

The latest-generation Constellation Observing System for Meteorology, Ionosphere, and Climate (FORMOSAT-7/COSMIC-2) provides high-resolution observations of Earth’s atmosphere, including the ionosphere. In this video, scientists and mission planners introduce the instrumentation used and describe the collaborations that made the COSMIC-2 mission possible. These experts describe how COSMIC uses a technique called radio occultation, making use of existing navigation satellite signals passing through the atmosphere to provide detailed measurements of temperature, pressure, and water vapor. They explain how these data contribute to exciting improvements in numerical weather prediction, hurricane forecasts, climate studies, and analysis of space weather affecting communication networks and other systems on Earth, in the video “FORMOSAT-7/COSMIC-2 Satellite System: Next Gen Weather & Climate Observations“, below:

For some background information on Constellation Observing System for Meteorology, Ionosphere, and Climate, please refer to the excerpt from wikipedia, in italics below:

Constellation Observing System for Meteorology, Ionosphere, and Climate (COSMIC) is a program designed to provide advances in meteorology, ionospheric research, climatology, and space weather by using GPS satellites in conjunction with low Earth orbiting (LEO) satellites. The term “COSMIC” may refer to either the organization itself or the constellation of satellites (also known as FORMOSAT-3, 福爾摩沙衛星三號, in Taiwan). The constellation is a joint U.S.-Taiwanese project with major participants including the University Corporation for Atmospheric Research (UCAR), the National Science Foundation, the Naval Research Laboratory (NRL), the Air Force Research Laboratory(AFRL) on the U.S. side and the National Space Organization (NSPO) on the Taiwanese side.

The total cost of the spacecraft and launch was US$100 million, 80% of which was being provided by NSPO, and the remainder by various U.S. agencies.[1]

According to Gunter’s Space Page, in italics: FORMOSAT-7 will establish operational Mission of near real-numerical weather prediction. It will collect 8000 (threshold) profiles per day (the objective number is 10000).

NSPO will design, procure, and integrate 12 spacecraft and integrate the GNSS payload provided by JPL. SSTL will provide the SSTL-100 busses. The Global Navigation Satellite System (GNSS) RO payload, named TGRS for TriG (Tri-GNSS) GNSS Radio Occultation System, is being developed by NASA’s Jet Propulsion Laboratory (JPL) and will be capable of tracking up to 12,000 high-quality profiles per day after both constellations are fully deployed. The satellite have GPS, GALILEO and GLONASS tracking capability. NOAA will procure the launch vehicles.

The U.S. Air Force is partnering on COSMIC-2 and will provide two space weather payloads that will fly on the first six satellites: RF Beacon transmitters and Velocity, Ion Density, and Irregularities (VIDI) instruments.

The first launch of six satellites of the low inclination constellation was planned for 2017, the second launch into the high inclination orbits will take place in 2019. The last launch might include a seventh Taiwan built back-up satellite, FORMOSAT 7R.

For those of you who are space or rocket fanatics, I have reserved these videos below for you as a treat: