The Aftermath of Iran Shooting Down U.S. Drone 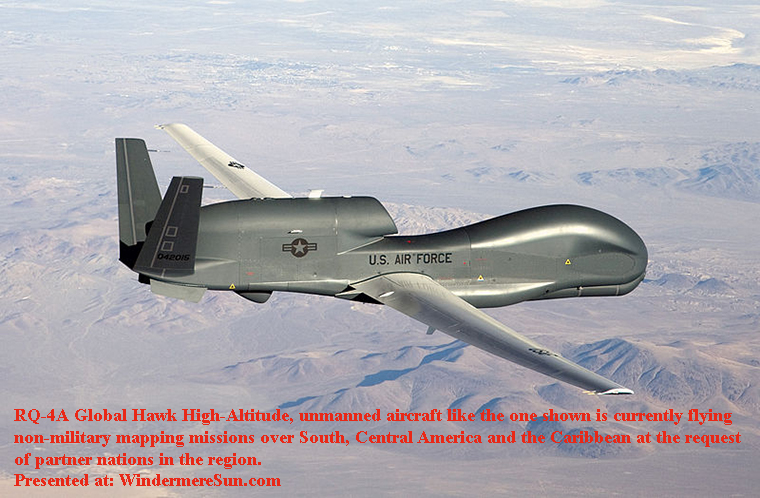 RQ-4 Global Hawk High-Altitude, An RQ-4 Global Hawk unmanned aircraft like the one shown is currently flying non-military mapping missions over South, Central America and the Caribbean at the request of partner nations in the region. (Attribution:U.S. Air Force, photo by Bobbi Zapka, PD, Presented at: WindermereSun.com)

Since May of 2018, Washington chose to leave the 2015 nuclear deal the Iranian regime negotiated with world powers, to reimpose crippling sanctions on Irans’ economy, and the relationship between U.S. and Iran have deteriorated.  Since the beginning of this week, with Trump administration’s decision to deploy 1,000 additional troops and more military resources to the Middle East on Monday, June 17, 2019, relationships between U.S. and Iran had made a turn for the worse.

Iran’s Revolutionary Guard shot down an unmanned U.S. drone on Thursday, raising tension over Strait of Hormuz over the already volatile situation between Washington and Tehran in the Middle East. The key point of contention is the location of the drone: the Foreign Minister of Iran, Javad Zarif, tweeted on Thursday that “At 00:14 US drone took off from UAE in stealth mode & violated Iranian airspace. It was targeted at 04:05 at the coordinates (25°59’43″N 57°02’25″E) near Kouh-e Mobarak.” The United States countered that the drone had been flying in international airspace when it was shot down, at about nine nautical miles southwest of the coordinates cited by Iran.

The strained relationship between the U.S. and Iran has worsened with Iran’s downing of an American surveillance drone. How serious is the incident, and how should the U.S. respond? Judy Woodruff talks to Stephen Hadley, who served as national security adviser under President George W. Bush, and Gerard Araud, former French ambassador to the U.S., to discuss the likelihood of a diplomatic solution, in the video “On Iran, former George W. Bush official calls for diplomacy“, below:

As of Thursday, June 20, 2019, 3:00 pm EST, Jennifer Griffin predicts Trump’s military response to Iran shooting down a U.S. drone would be much different if an American had been injured or killed, in the video “Pentagon releases footage of US drone being shot down by Iran“, below:

The Pentagon has released a video that they claim shows Iran shooting down a US drone. Iran’s Revolutionary Guard said it had shot down an “intruding American spy drone” after it entered into the country’s territory. A US official confirmed to CNN a drone had been shot down, but said the incident occurred in international airspace over the Strait of Hormuz, one of the world’s most vital shipping routes, in the video “Video shows Iran shooting down US drone“, below:

According to the New York Times, President Trump reportedly approved military strikes against Iran in retaliation for the downing of a U.S. drone, then suddenly called off the mission amid escalating tensions across the Middle East. Michael Crowley, Tessa Berenson and Ben Rhodes join, in the video “NYT: Trump Approved Strikes On Iran But Pulled Back From Launching Them, The 11th Hour, MSNBC“, below:

Iran’s downing of a $180 million unmanned drone over the Strait of Hormuz on Thursday has escalated tensions in the already volatile region. US President Trump isn’t ruling out retaliatory strikes. Former Pentagon official Michael Maloof discusses the latest with RT America’s Manila Chan, in the video “Trump mulls retaliatory strike on Iran“, below:

Syed Abbas Mousavi, Iran’s foreign ministry spokesperson, said the country condemned the “aggressive and provocative action.” He said, “We warn against any violation of Iran’s airspace by foreign flying objects and declare that violators are responsible for the consequences of their actions.”  President Hassan Rouhani said the country does not seek war but “is determined to show its hopefulness and vitality and defeat enemy’s plot.”

Senator Ben Cardin stated, “I think military response would be a mistake. There is no such a thing as a limited military response. Right now this could not be used as justification to escalate a military conflict in the region. That’s not in the United States’ interest.”

Regardless whether Iranian’s shooting down the U.S. drone was due to miscalculations or due to intention, I would like to remind us of another incident between U.S. and Iran back in 1988, in the excerpt from wikipedia, in italics, below: