Looking For A New Eden Among The Stars 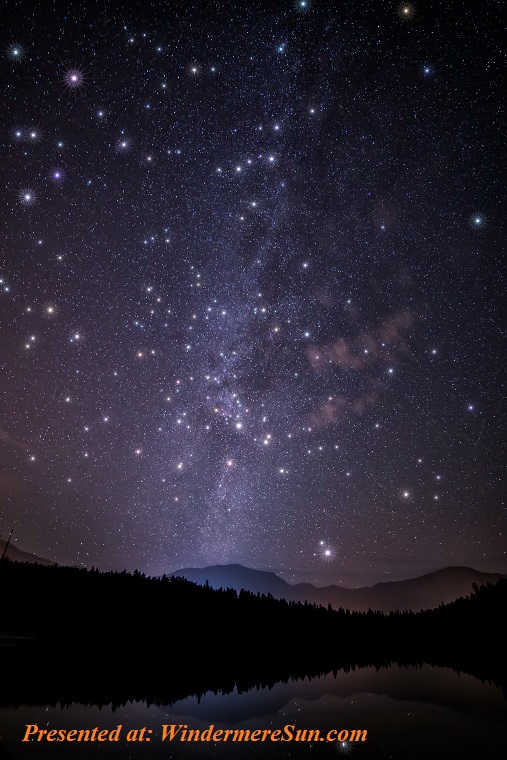 To be among the stars (presented at: WindermereSun.com) 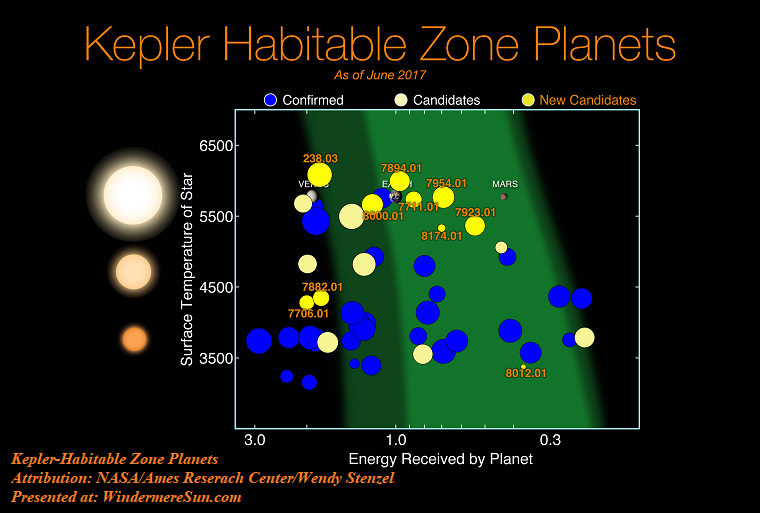 This color–color diagram compares the colors of planets in the Solar System to exoplanet HD 189733b. The exoplanet’s deep blue color is produced by silicate droplets, which scatter blue light in its atmosphere. (Attribution: NASA/ESA/A. Field (STScl), Presented at: WindermereSun.com) 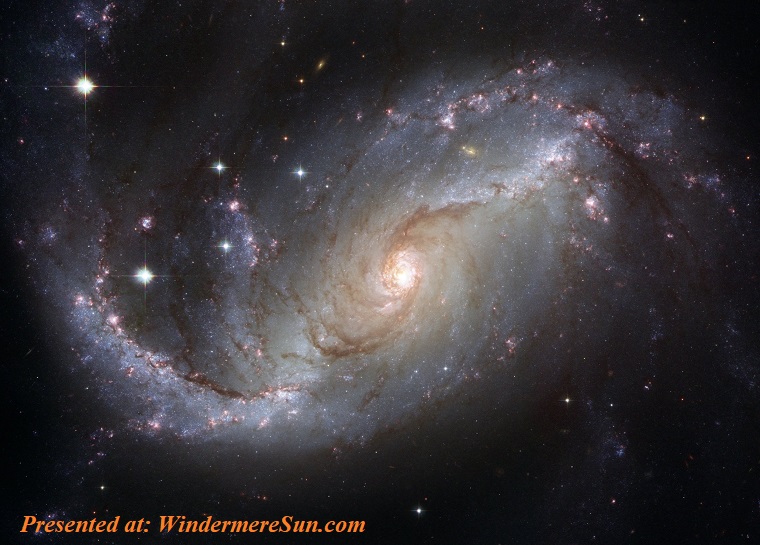 Exoplanets challenge the notion that we are alone in the universe.

Below, in italics, is an excerpt about exoplanet, from wikipedia:

There are many methods of detecting exoplanets. Transit photometry and Doppler spectroscopy have found the most, but these methods suffer from a clear observational bias favoring the detection of planets near the star; thus, 85% of the exoplanets detected are inside the tidal locking zone.[7] In several cases, multiple planets have been observed around a star.[8] About 1 in 5 Sun-like stars[a] have an “Earth-sized”[b] planet in the habitable zone.[c][9][10] Assuming there are 200 billion stars in the Milky Way,[d] it can be hypothesized that there are 11 billion potentially habitable Earth-sized planets in the Milky Way, rising to 40 billion if planets orbiting the numerous red dwarfs are included.[11]

As of June 2017, NASA’s Kepler mission had identified more than 5,000 planetary candidates,[52] several of them being nearly Earth-sized and located in the habitable zone, some around Sun-like stars.[53][54][55] About 97% of all the confirmed exoplanets have been discovered by indirect techniques of detection, mainly by radial velocity measurements and transit monitoring techniques.[59]

Since the beginning of civilization, humanity has wondered whether we are alone in the universe. As NASA has explored our solar system and beyond, it has developed increasingly sophisticated tools to address this fundamental question. Within our solar system, NASA’s missions have searched for signs of both ancient and current life, especially on Mars and soon, Jupiter’s moon Europa. Beyond our solar system, missions, such as Kepler and TESS, are revealing thousands of planets orbiting other stars. The explosion of knowledge of planets orbiting other stars, called exoplanets, and the results of decades of research on signatures of life – what scientists call biosignatures – have encouraged NASA to address, in a scientifically rigorous way, whether humanity is alone. Beyond searching for evidence of just microbial life, NASA now is exploring ways to search for life advanced enough to create technology, in the video “Exoplanets:Are We Close To Finding A New Earth?-Space Science Documentary“, below:

Learn what types of exoplanets exist, the methods scientists employ to find them, and how many worlds might exist in the Milky Way Galaxy, in the video “Exoplanets 101, National Geographic“, below:

New methods of data analysis have led to the discovery of 18 more Earth-sized planets beyond the Solar system. RT America’s Trinity Chavez explains the science behind the breakthrough for News.Views.Hughes, in the video “Astronomers find 18 new exoplanets“, below:

Jessie Christiansen, NASA’s Exoplanet Science Institute, said, “It was inevitable that improved searches of the data would uncover previously undetected small planets.” Of the exoplanets discovered, the largest is just over twice the size of earth and the smallest is about 70% of the size of the earth.

Earth probably isn’t the best place in the universe. It turns out there might be even better places to live that are even more suitable for life: superhabitable planets, in the video “Are There Planets More Habitable Than Earth?” below:

In the habitable zone, the liquid water can exist on a planet’s surface. But this condition will not last forever. Superhabitable planets would be able to maintain liquid water much longer than ours, be in a comfortable position relative to the sun, with atmosphere, and various other agreeable factors. The Sun’s habitable zone is currently pushing outwards at about a meter a year. And it’s predicted that we’ll fall off the zone’s inner edge in some 1.75 billion years. It turns out that other planets will stay in their stars’ habitable zones for much longer, because they’ll orbit stars better than our Sun. Smaller stars actually live even longer because there is less gravity to power the fusion reactions in the core. So they burn slower and their fuel lasts longer. Meaning, these superhabitable planets or zones will migrate outwards more slowly. So a planet will be able to maintain the right temperatures for liquid water for many more years. Scientists believe the ideal stars for habitable planets are the intermediate K-class orange stars. They’re about 50% to 80% the mass of our Sun and can live more than 30 or 40 billion years. The superhabitability also involves tweaking the atmosphere, geology, and geography of the planet. A superhabitable planet would do away with barren landscapes to support more species. It may be an earth-like planet twice as massive as earth, therefore with more gravity to hold on to more atmospheric gases, leading to more greenhouse-style warming and be able to orbit farther from its star and still stay warm enough to have liquid water. Stronger gravity would also help to heat the center of the planet, which might cause more active plate tectonics. A geologically active planet would keep renewing elements such as phosphorus and calcium, needed by life to thrive. Shifting plates would bring the elements to the surface, stopping them from being trapped in the planet’s crust for too long. Strong gravity would also cause the iron core of a planet to be hotter, likely resulting in a stronger magnetic field, which would protect the planet’s atmosphere from particles and flares flying off its star.

U.S. space agency NASA announced the discovery of more than 200 new planets on Monday, 10 of which are believed to be about the right size and temperature to support life. Of the 219 new suspected planets to have been discovered by NASA’s Kepler telescope, 10 were found to exist in the so-called ‘Goldilocks zone’ of their solar system. This refers to the distance between the planet and their star, which is neither too hot nor too cold to support complex life. The presence of liquid water on these “rocky” Earth-like planets is seen as a key ingredient required for the existence of life. “Are we alone? Maybe Kepler today has told us indirectly, although we need confirmation, that we are probably not alone,” Mario Perez, Kepler program scientist, said at a news conference. NASA launched the Kepler telescope in 2009 in a bid to discover whether other Earth-like planets are common or rare. The latest identification of suspected exoplanets – planets outside our own solar system – brings the tally discovered by the Kepler telescope to 4,034. The number of worlds thought to be approximately the same size and temperature as Earth is around 50, in the video “The Earth Is Not Alone-Space Documentary HD“, below:

Since the discovery of the first exoplanet orbiting a sun-like star in 1995, several thousand more have been discovered. We’ve peered into the atmospheres of some, and we’ve found whole families of planets orbiting strange stars — many in configurations starkly different from our own. We’ve learned a lot from NASA’s Kepler mission, which launched 10 years ago and ceased operations in November 2018. A new NASA planet-hunting spacecraft called TESS, which began science operations as Kepler was winding down, will give us thousands of new discoveries in the coming years. And the Spitzer Space Telescope has provided us valuable insights into what these worlds might be like. This show will look at the state of exoplanet science and give us a view of what future discoveries may be around the corner. Speakers: Jessie Christiansen, Research Scientist at the Caltech/IPAC NASA Exoplanet Science Institute, Caltech Karl Stapelfeldt, Chief Scientist, NASA Exoplanet Exploration Program Office, JPL, in the video “The Golden Age of Exoplanet Exploration (live public talk)“, below:
Astronomers using the Hubble Space Telescope have conducted the first spectroscopic survey of Earth-sized planets in the TRAPPIST-1 system’s habitable zone. Hubble reveals that at least the inner five planets do not seem to contain puffy, hydrogen-rich atmospheres similar to gaseous planets such as Neptune. This means the atmospheres may be more shallow and rich in heavier gases like carbon dioxide, methane, and oxygen, in the video “Hubble Observes Atmosphere of TRAPPIST-1 Exoplanets in the Habitable Zone“, below:

It appears as though there might be a good chance for us to find one of these superhabitable planets or earth-like planets by 1.75 billion years.