“Lessons from the Mueller Report: Presidential Obstruction and other Crimes” Will Begin on June 10, 2019 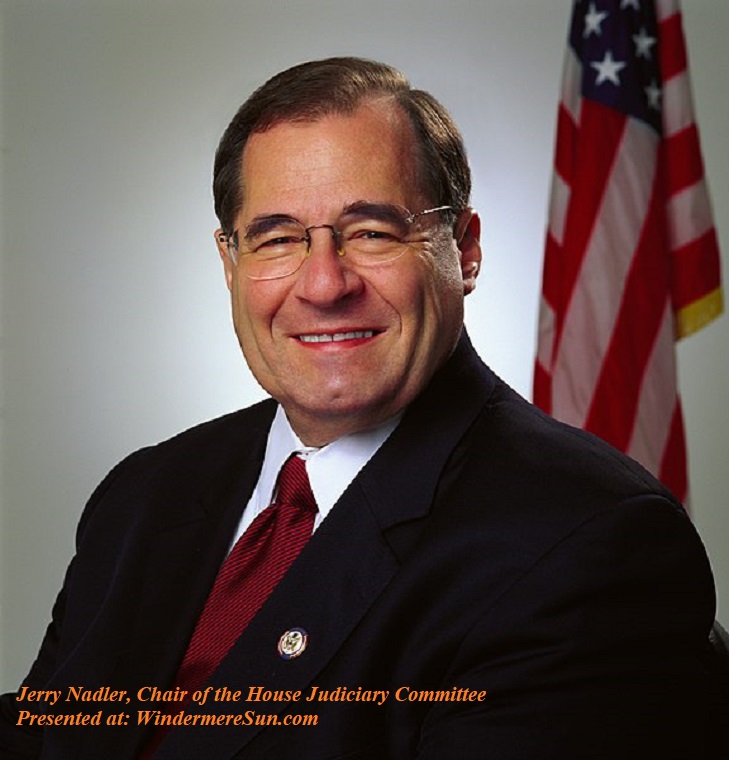 The U.S. House of Representatives Judiciary Committee will be holding a hearing next Monday, June 10, 2019, on Mueller’s report on Russian interference in the 2016 U.S. presidential election and its connections to Donald Trump‘s campaign. The Committee Chairman Jerry Nadler said in a statement, “We have learned so much even from the redacted version of Special Counsel Robert Mueller‘s report. These hearings will allow us to examine the findings laid out in Mueller’s report so that we can work to protect the rule of law and protect future elections through consideration of legislative and other remedies.” Nadler also said, “Our first hearing will focus on President Trump’s most overt acts of obstruction. In the coming weeks, other hearings will focus on other important aspects of the Mueller report.”

The committee will also hear testimony from John Dean (former White House counsel to President Richard Nixon and who served a year in prison in connection with the Watergate scandal), former U.S. attorneys, and legal experts.

In the wake of Mueller’s historic speech Judiciary Chairman Jerry Nadler calling an obstruction hearing on Trump’s ‘alleged crimes’.  A defiant Nadler blasting a “cover up” and “stonewall” from Trump’s White House.  It comes as a coalition of House members backing impeachment hits 58, including a top Democrat breaking with Pelosi saying Trump will be impeached eventually. Rep. John Yarmuth tells Ari Melber he thinks Trump’s impeachment is ‘inevitable.’ in the video “Whoa: Dem Congressman Declares Trump Impeachment Now ‘inevitable’, The Beat With Ari Melber, MSNBC“, below:

Rep. David Cicilline, who serves on the Judiciary Committee, tells Ari Melber that Bob Mueller needs to testify “immediately.” When pressed by Melber, the Congressman says if Mueller “doesn’t come voluntarily” then he has “every confidence the chairman will issue the subpoena.” This revelation comes as more Trump aides defy subpoenas and a growing number of lawmakers are pushing for impeachment hearings, in the video “Dem. Rep.: Mueller Must Testify ‘Immediately,’ Will Be Subpoenaed, The Beat With Ari Melber, MSNBC“, below:

Even though Mueller’s 448-page report documented numerous occasions in which Trump tried to quash the probe, including firing former FBI Director James Comey, Mueller ultimately could not indict Trump because of a Justice Department policy that prohibits indicting a sitting president.

In May, Attorney General William Barr refused to appear before a scheduled committee hearing and the White House blocked former White House Counsel Don McGahn from appearning in another hearing.

The process for impeachment is gaining momentum. More Republicans are starting to join the movement. Impeachment appears “inevitable” by some at this point.

Keep in mind: the first hearing in the series, titled “Lessons from the Mueller Report: Presidential Obstruction and other Crimes” will take place on June 10, 2019, with feature testimony from John Dean, former U.S. attorneys and legal experts.