Trump Tweets, Then Retracts, That Russia Helped Him To Get Elected 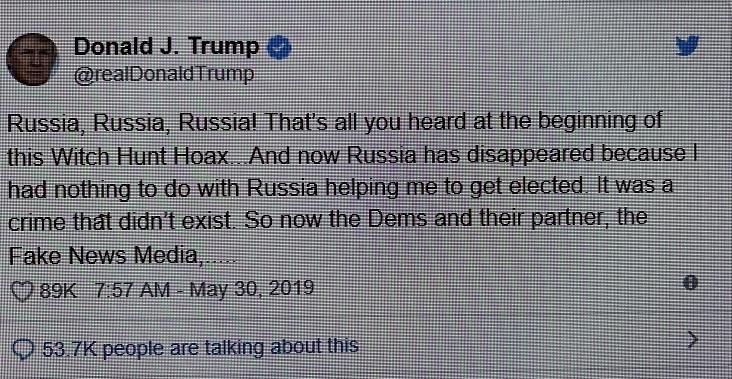 “Russia, Russia, Russia! That’s all you heard at the beginning of this Witch Hunt Hoax…And now Russia has disappeared because I had nothing to do with Russia helping me to get elected. It was a crime that didn’t exist. So now the Dems and their partner, the Fake News Media...”

But soon afterward, Trump told reporters, “No, Russia did not help me get elected. You know who got me elected? I got me elected. Russia didn’t help me at all. Russia, if anything, helped the other side.” President Trump also blasted special counsel Robert Mueller on Thursday, calling him a “never Trumper”. Furthermore, Trump said that Mueller, even though a Republican, was “conflicted” and should have investigated law enforcement officials who the president believed to have undermined him. In the video, “Trump unleashes fury on Mueller“, below:

After Robert Mueller’s public comments about his report, President Trump tweets that the “case is closed.” Ari Melber calls not only the tweet laughable but points out that Mueller report states that it is up to Congress to deal with high crimes by the president, in the video “President Trump Says ‘Case Is Closed’ After Robert Mueller Statement, Melber Refutes, MSNBC“, below:

CNN’s Jake Tapper discusses President Trump’s tweet where he admitted that Russia worked to elect him in 2016, a conclusion that is shared by the intelligence community, in the video “Jake Tapper: Trump accidentally admitted the truth“, below: