Man & His Dog/Beauty Awakens The Soul To Act 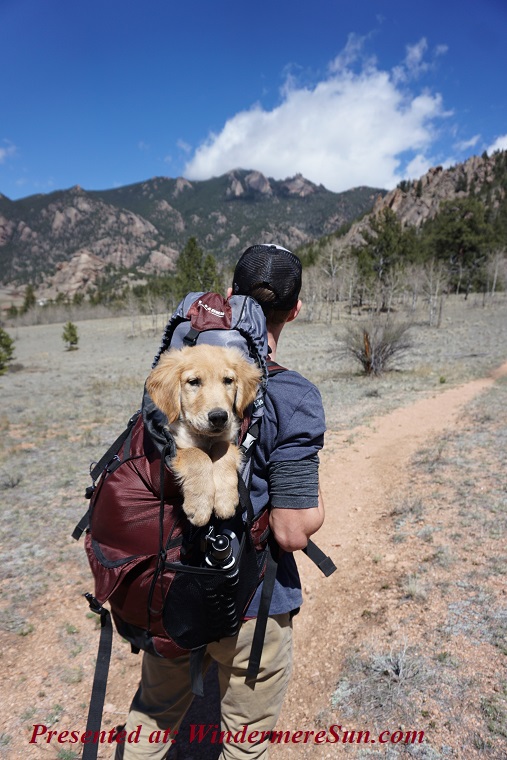 A man is hiking with his pal in his backpack…out in the wild…..both enjoying the scenery…..

Quote of 05/25/2019: “Beauty awakens the soul to act.” (Quote of Dante Alighieri, Photo of Susan Sun Nunamaker, Presented at: WindermereSun.com)

Dante Alighieri once commented with a long sigh, “Beauty awakens the soul to act.”

To find out more about Dante Alighieri, please refer to the excerpt from wikipedia, in italics, below:

In the late Middle Ages, most poetry was written in Latin, making it accessible only to the most educated readers. In De vulgari eloquentia (On Eloquence in the Vernacular), however, Dante defended the use of the vernacular in literature. He would even write in the Tuscan dialect for works such as The New Life (1295) and the Divine Comedy; this highly unorthodox choice set a precedent that important later Italian writers such as Petrarch and Boccaccio would follow.

Dante was instrumental in establishing the literature of Italy, and his depictions of Hell, Purgatory and Heaven provided inspiration for the larger body of Western art.[6][7] He is cited as an influence on John Milton, Geoffrey Chaucer and Alfred Tennyson, among many others. In addition, the first use of the interlocking three-line rhyme scheme, or the terza rima, is attributed to him. In Italy, he is often referred to as il Sommo Poeta (“the Supreme Poet”) and il Poeta; he, Petrarch, and Boccaccio are also called “the three fountains” or “the three crowns”.