Amit Mehta, Judge of the United States District Court for the District of Columbia (Presented at: WindermereSun.com) 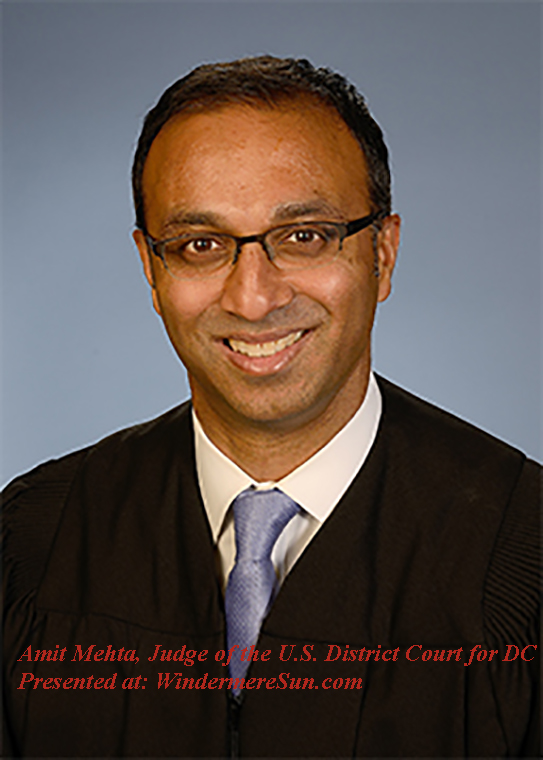 Amit Mehta, Judge of the United States District Court for the District of Columbia (Presented at: WindermereSun.com)

Early this week, on Monday, May 20, 2019, Judge Amit Mehta of the U.S. District Court for the District of Columbia ruled that President Trump cannot block the committee’s subpoena to Trump’s accountant, Mazars, in Trump v. Committee on Oversight  and Reform. Judge Mehta found that the committee had demonstrated valid legislative purpose for its investigation and the issuance of the subpoena. Judge Mehta’s opinion provided a clear rejection of Trump’s argument that Congress lacks a legitimate legislative purpose, an argument Trump is making across the board in order to reject oversight attempts by House Democrats. Trump filed his appeal soon afterward.

Oral arguments in Trump v. Deutsche Bank AG are scheduled for May 22, 2019, in the U.S. District Court for the Southern District of New York before Judge Edgardo Ramos. The case involves two different House committees, the financial services committee and the intelligence committee. Trump is trying to block subpoenas directing Deutsche Bank and Capital One to turn over his, his three children, and his businesses’ bank records. Ruling on May 22, 2019, from Judge Ramos, stated, “The Court concludes that plaintiffs have not raised any serious questions going to the merits. As the above analysis makes clear, the Supreme Court has likely foreclosed the path plaintiffs ask this Court to travel. It is well settled that the committees possessed the power to issue and enforce subpoenas of the type challenged by Plaintiffs. The committees have alleged a pressing need for the subpoenaed documents to further their investigation, and it is not the role of the Court or plaintiffs to second guess that need, especially in light of the Court’s conclusions that the requested documents are pertinent to what is likely a lawful congressional investigation. And, in the committees’ words, “Plaintiffs’ contrary argument ignores the clear and compelling public interest in expeditious and unimpeded Congressional investigations into core aspects of the financial and election systems that touch every member of the public.” The Court agrees.“

According to Politico, federal judge upheld a congressional subpoena seeking President Donald Trump’s financial records from an accounting firm, dealing a blow to the president’s efforts to resist Democratic investigations, in the video “Judge Upholds Subpoena For Trump’s Financial Records“, below:

Rachel Maddow looks at how Donald Trump has steadily lost ground in his fight to keep his finances, campaign, and administration opaque to oversight and investigation, in the video “President Donald Trump Losses Mount As Cracks Form In Dam Of Secrecy, Rachel Maddow, MSNBC“, below:

A federal judge has issued a ruling backing the democratic subpoena for Trump’s banking records, rejecting Trump’s effort to halt it. MSNBC Chief Legal Correspondent, Ari Melber, breaks down how this is the second straight court loss for Trump’s effort to defy subpoenas and unless a higher court steps in, Trump is getting crushed on multiple fronts judicially, in the video “Legal Blow: Judge Backs Der Subpoenas For Trump Bank Records, The Beat With Ari Melber, MSNBC“, below: