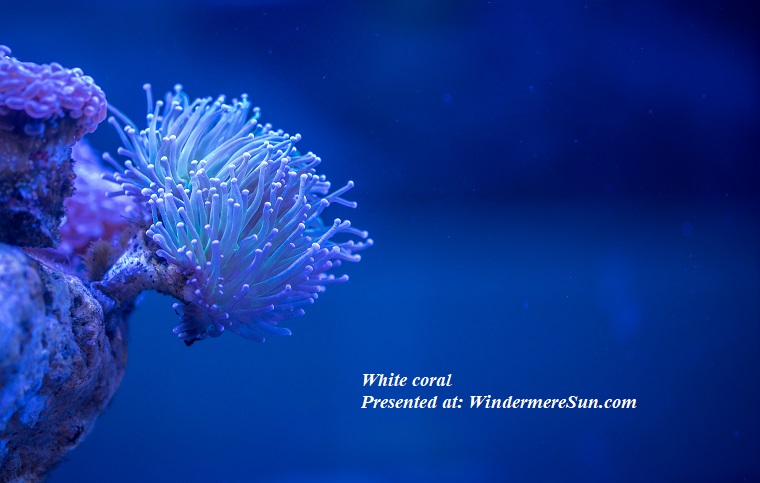 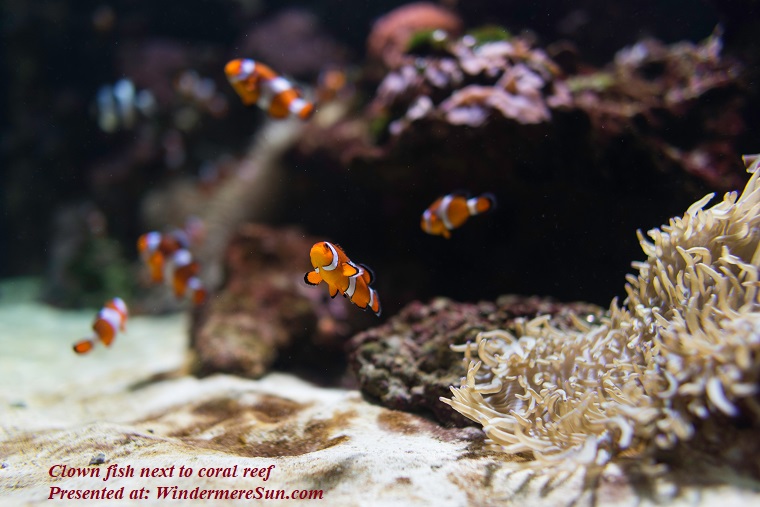 Clown fish next to coral reef (Presented at: WindermereSun.com) 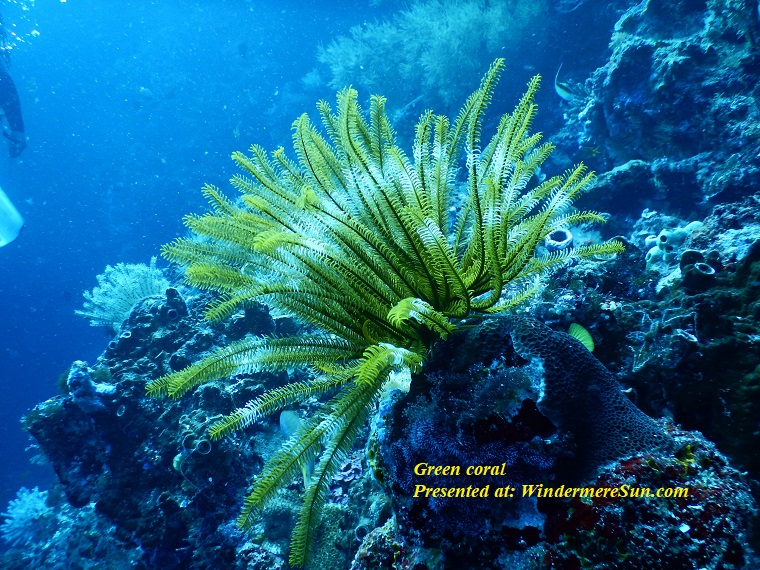 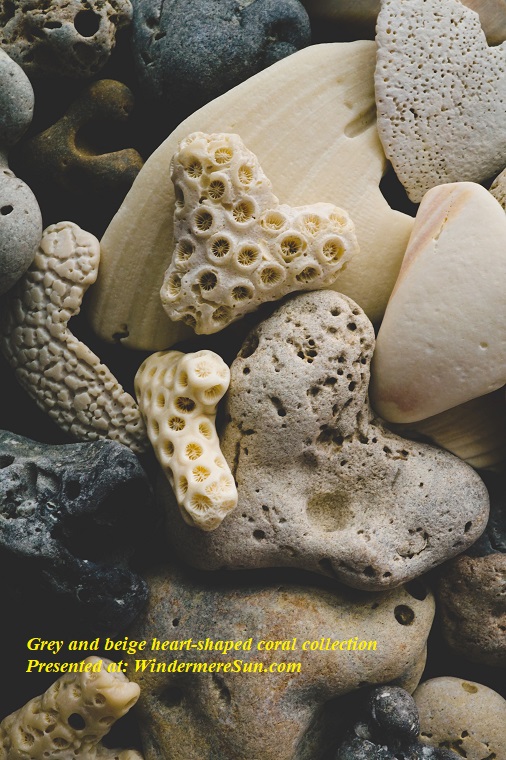 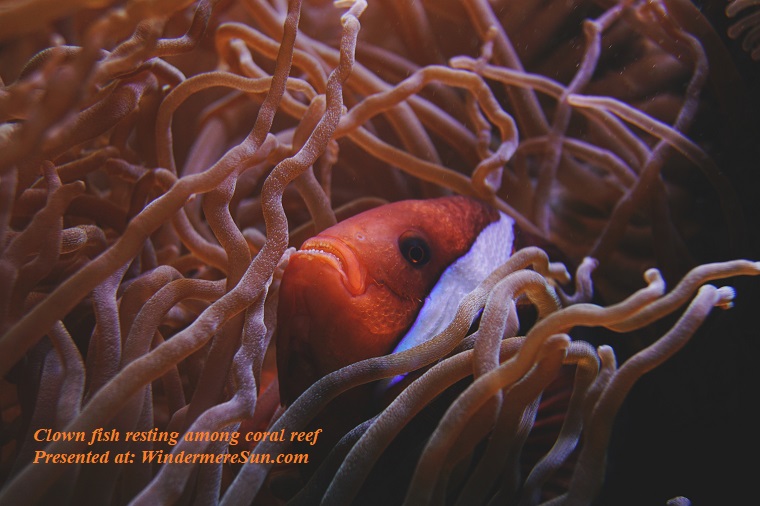 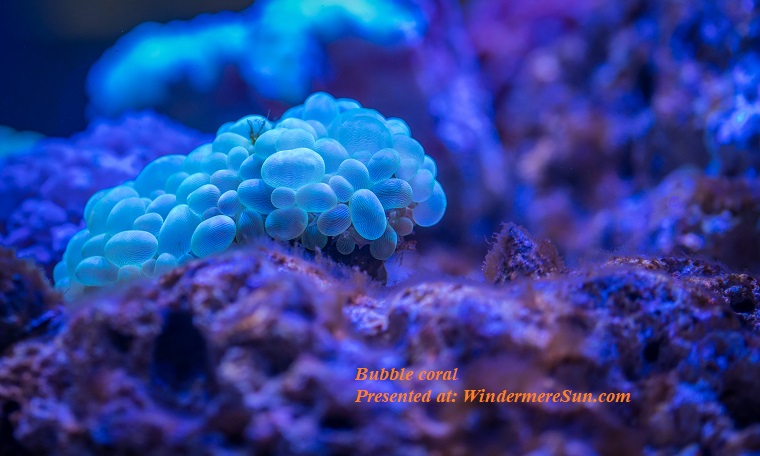 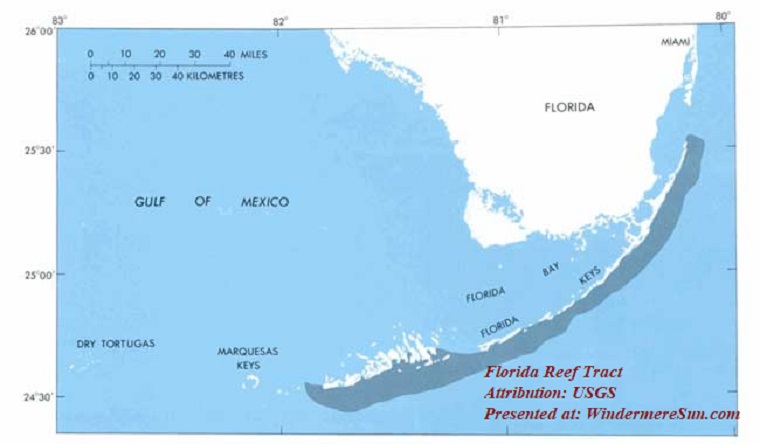 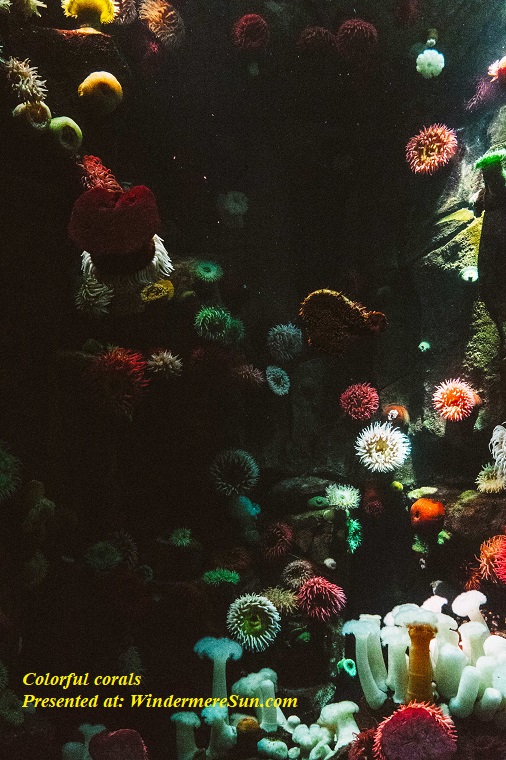 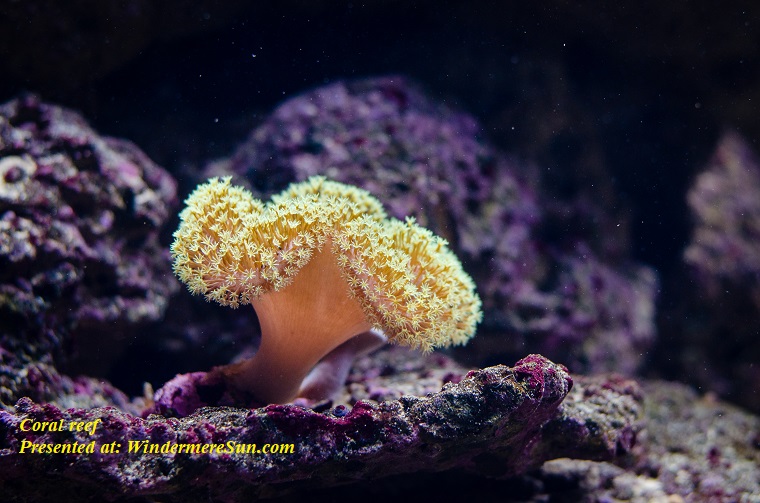 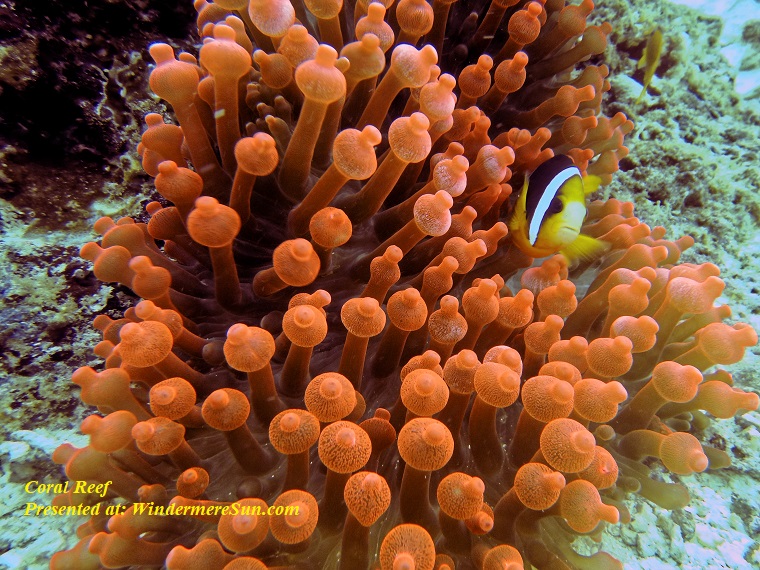 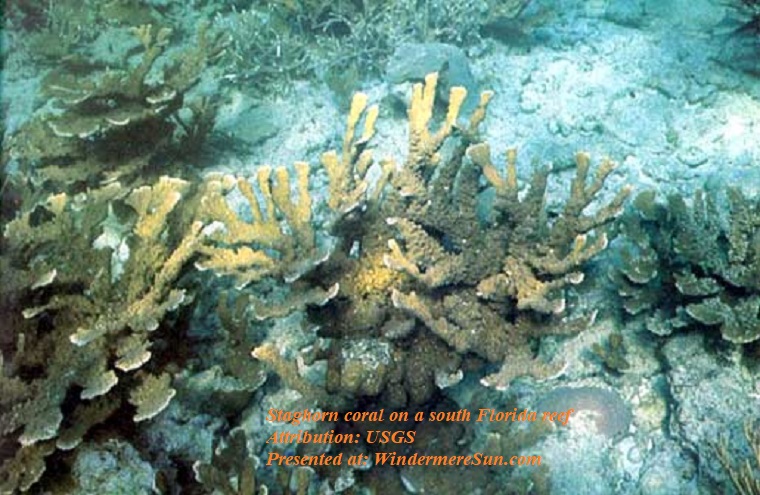 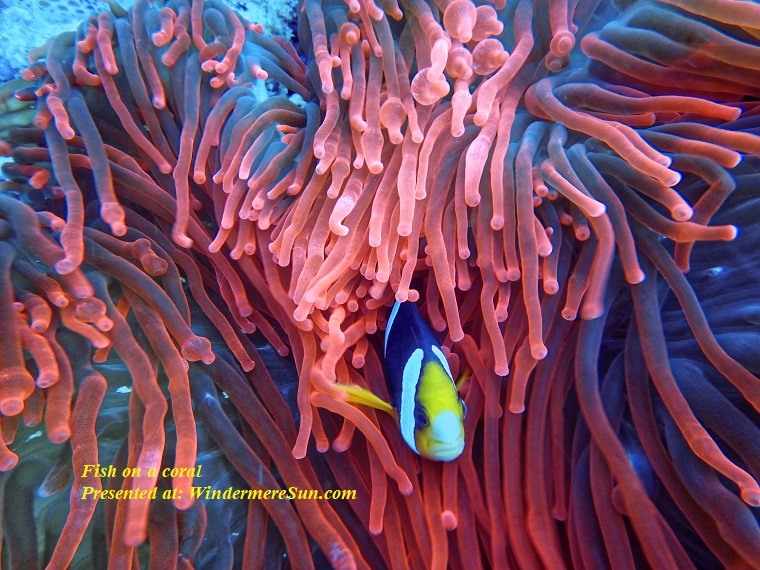 Fish on a coral (Presented at: WindermereSun.com) 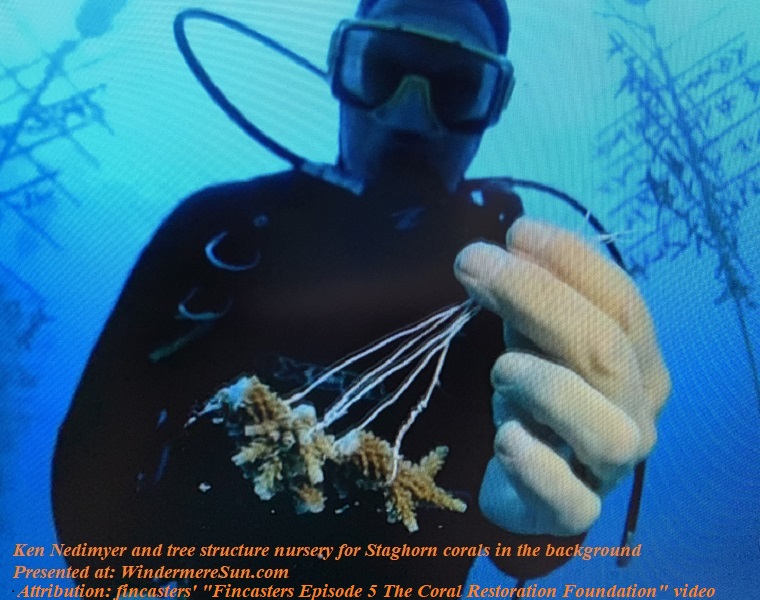 Coral reefs have been around for more than 50 millions years on planet earth, but they could all be gone by the end of this century.

To better understand why coral reefs are important to life on earth, please refer to excerpt from wikipedia, in italics, below:

A coral reef is an underwater ecosystem characterized by reef-building corals. Reefs are formed of colonies of coral polyps held together by calcium carbonate. Most coral reefs are built from stony corals, whose polyps cluster in groups.

Coral belongs to the class Anthozoa in the animal phylum Cnidaria, which includes sea anemones and jellyfish. Unlike sea anemones, corals secrete hard carbonate exoskeletons that support and protect the coral. Most reefs grow best in warm, shallow, clear, sunny and agitated water.

Often called “rainforests of the sea“, shallow coral reefs form some of Earth’s most diverse ecosystems. They occupy less than 0.1% of the world’s ocean area, about half the area of France, yet they provide a home for at least 25% of all marine species,[1][2][3][4] including fish, mollusks, worms, crustaceans, echinoderms, sponges, tunicates and other cnidarians.[5] Coral reefs flourish in ocean waters that provide few nutrients. They are most commonly found at shallow depths in tropical waters, but deep water and cold water coral reefs exist on smaller scales in other areas.

Coral reefs deliver ecosystem services for tourism, fisheries and shoreline protection. The annual global economic value of coral reefs is estimated between US$30–375 billion[6][7] and 9.9 trillion USD [8]. Coral reefs are fragile, partly because they are sensitive to water conditions. They are under threat from excess nutrients (nitrogen and phosphorus), rising temperatures, oceanic acidification, overfishing (e.g., from blast fishing, cyanide fishing, spearfishing on scuba), sunscreen use,[9] and harmful land-use practices, including runoff and seeps (e.g., from injection wells and cesspools).[10][11][12]

Since the 1970’s, the Florida Reef Tract has lost almost 97% of its once-dominant staghorn and elkhorn coral. These species are now critically endangered. Coral reefs are the backbone of life in the oceans and a critical part of the web of life on our planet. The world’s ocean are absorbing carbon dioxide at an unprecedented rate and the resulting acidification is transforming marine ecosystems. We look at how ocean acidification is already affecting coral reefs in the Florida Keys. Video produced by Saskia de Melker and underwater footage by Frazier Nivens, in the video “Florida’s Coral Reefs Face Altered Oceans“, below:

According to more than 100 monitoring stations in the Florida Keys, there has been a 44% decline in coral reefs in the past 20 years. It is even worse on many of the Caribbean reefs, with a decline of 80% in the past 30 years. Overfishing and pollution resulting from increased human activities have been the main contributing factors for such dramatic decline. Ken Nedimyer, a commercial fish collector, live rock farmer, and a longtime resident of the Florida Keys, have seen first hand the decline of the local reefs through the decades and founded the Coral Restoration Foundation, experimenting with different methods for growing coral in offshore, in-situ nurseries. Nedimyer saw the potential for an aggressive new type of marine conservation that not only protected threatened reef habitats but also actively restored them. By 2007, Nedimyer had demonstrated that his staghorn coral could be grown rapidly and then outplanted to the reef. So he enlisted his family and a small dedicated staff and founded Coral Restoration Foundation to begin building up stock of staghorn and elkhorn (Acropora palmata) coral. Disk nurseries, line nurseries, and several forms of tree nurseries were tried before the current tree structure was invented. If you’re interested in helping Nedimyer with the planting and helping to save our planet’s coral reefs, for coral reefs are the backbone of life in the oceans, please feel free to check out: Coral Restoration Foundation.

Ken Nedimyer and his nonprofit are working to restore endangered coral reefs in the Florida Keys, in the video “CNN:CNN Hero, Ken Nedimyer“:, below:

Ken Nedimyer gives an inside look at his group’s underwater coral nursery in Florida, in the video “CNN Hero, Ken Nedimyer Bringing life back to coral reefs“, below:

Perhaps coastal areas of other parts of USA and in other countries outside of USA may consider doing the same in bringing life back to coral reefs.