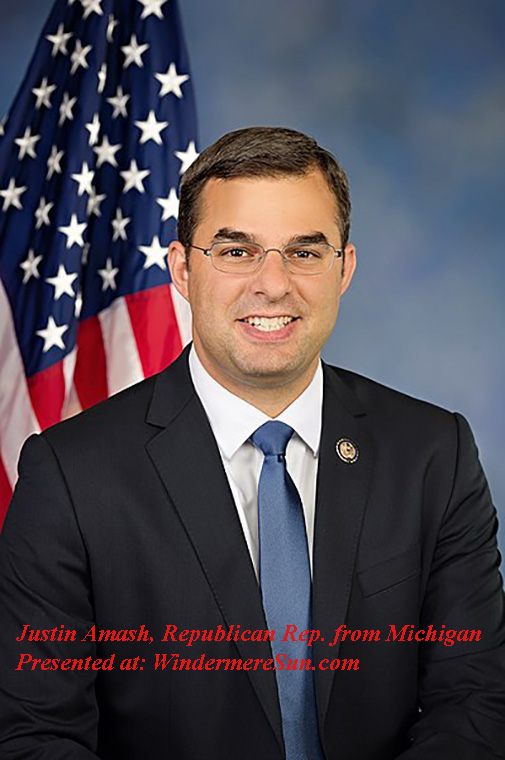 On Twitter on Saturday, May 18, 2019, Republican Representative Justin Amash (Politico described him as “one of the most conservative members of Congress.”) of Michigan, tweeted that he’s concluded that after reading Special Counsel Robert Mueller’s redacted 448-page report…that Attorney General William Barr “deliberately misrepresented” the findings using “sleight-of-hand qualifications or logical fallacies.” Justin Amash, a libertarian Republican who’s often at odds with most other congressional Republicans, said Donald Trump has engaged in “impeachable conduct,” drawing a rebuke from the president as a “total lightweight.”

Rep. Amash further added, “In comparing Barr’s principal conclusions, congressional testimony, and other statements to Mueller’s report, it is clear that Barr intended to mislead the public about Special Counsel Robert Mueller’s analysis and findings. Contrary to Barr’s portrayal, Mueller’s report reveals that President Trump engaged in specific actions and a pattern of behavior that meet the threshold for impeachment.”

Michigan Congressman Justin Amash is asking Congress to move against President Trump. He’s accusing the president of obstructing justice and wants him impeached. There’s also a chorus of Democrats demanding the same. Weijia Jiang reports in the video “Michigan congressman calling for Congress to impeach Trump“, below:

CNN’s SE Cupp says a tweet from Rep. Justin Amash (R-MI) stating that President Trump’s actions and behavior “meet the threshold for impeachment” is significant, in the video “SE Cupp reacts to Amash ‘impeachment’ tweet: This is big“, below:

Amash’s defection from the Republican ranks emboldened some Democrats who want to see impeachment proceedings start. Representative Rashida Tlaib of Michigan, who has submitted an impeachment resolution, commended Amash on Twitter on Saturday and asked him to sign on to the resolution to make it bipartisan. “You are putting country first, and that is to be commended,” Tlaib said to Amash in a tweet. While Amash has shown more courage than any other congressional Republican, it’s the administration’s “maximum obstruction campaign” to thwart oversight efforts by Democrats that may spur impeachment proceedings as a tool to get cooperation, Representative Adam Schiff of California, chairman of the House Intelligence Committee, said on CBS’s “Face the Nation” on Sunday. More members of Congress are recognizing that the administration is “acting in a lawless fashion,” and if the only way to properly do oversight is to start impeachment proceedings, “maybe we have to go down that road,” Schiff said.

Republican leaders in the House and Senate are not holding back criticism of Rep. Justin Amash (R-MI) after Amash said President Donald Trump committed “impeachable conduct.” CNN’s Sunlen Serfaty reports, in the video “GOP leadership calls out Amash over impeachment push“, below:

Now, the question is: is there any other courageous Republican Congresspeople besides Rep. Justin Amash, who would care more about our country above party?

Actor Jeff Daniels joins Nicolle Wallace to discuss the Trump presidency, the average American voter, and how the current political climate impacts his performance of Atticus Finch in Broadway’s “To Kill a Mockingbird” in the video “Jeff Daniels: ‘If The Big Gamble Is To Go All The Way To 2020…And Lose, Deadline, MSNBC“, below:

So, how many truly heroic and patriotic Republicans are there besides Justin Amash?