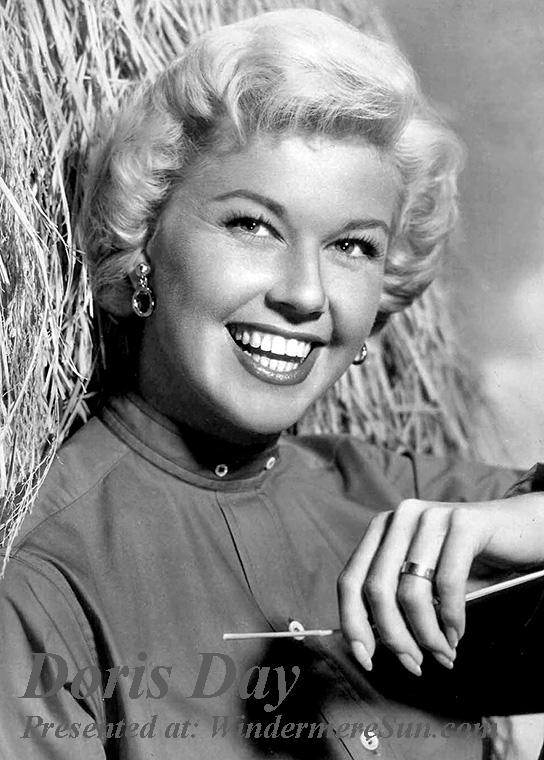 Best known for her roles in musicals such as “Tea for Two” and “Calamity Jane, Doris Day (born Doris Mary Ann Kappelhoff; April 3, 1922 – May 13, 2019) was an American actress, singer, and animal-welfare activist. She began her career as a big band singer in 1939, her first hit recording being “Sentimental Journey” in 1945 with Les Brown & His Band of Renown. After leaving Brown to embark on a solo career, she recorded more than 650 songs from 1947 to 1967.

Below, is an excerpt from wikipedia, about life of Doris Day, in italics:

Day’s film career began during the latter part of the Classical Hollywood era with the film Romance on the High Seas (1948), ultimately leading to her twenty-year career as a motion picture actress. She starred in films of many genres, including musicals, comedies, and dramas. She played the title role in Calamity Jane (1953), and starred in Alfred Hitchcock‘s The Man Who Knew Too Much (1956) with James Stewart. Day’s most best-known films are those in which she co-stared with Rock Hudson, chief among them 1959’s Pillow Talk. She also worked with James Garner on Move Over, Darling (1963) and co-starred with such leading men as Clark Gable, Cary Grant, James Stewart, David Niven, and Rod Taylor. After her final film in 1968, Day starred in the sitcom The Doris Day Show (1968–1973).

Day became one of the biggest female film stars in the early 1960s; through 2012, she was one of only eight performers to be the top box-office earner in the United States four times.[2][3] In 2011, she released her 29th studio album, My Heart, which contained new material and became a UK Top 10 album. Day received the Grammy Lifetime Achievement Award and a Legend Award from the Society of Singers. In 1960, she was nominated for the Academy Award for Best Actress,[4] and in 1989 was given the Cecil B. DeMille Award for lifetime achievement in motion pictures. In 2004, she was awarded the Presidential Medal of Freedom; this was followed in 2011 by the Los Angeles Film Critics Association’s Career Achievement Award.

Doris Day died on May 13, 2019, at age 97, at her home in Carmel Valley, California, after suffering from pneumonia. Her death was announced by her charity, the Doris Day Animal Foundation. Per Day’s requests, the Foundation announced that there would be no funeral services, gravesites, or other public memorials.

We will always remember Doris Day with her smile.