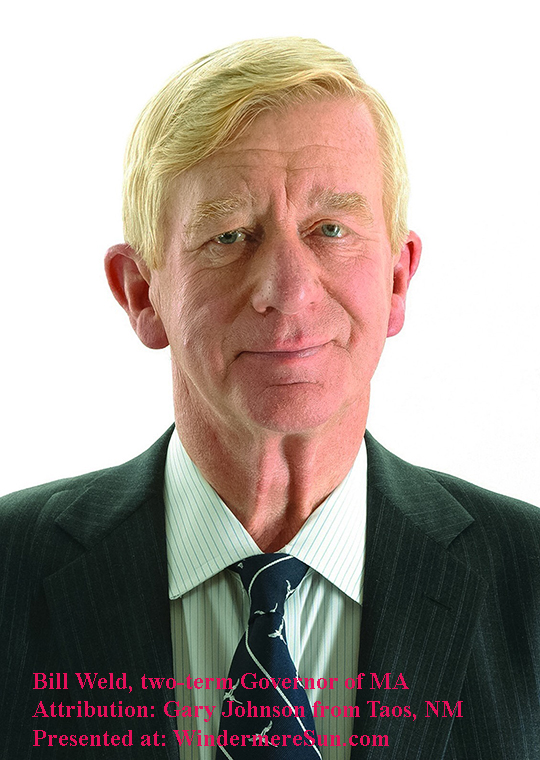 About two weeks ago, the former two-term Republican Massachusetts Governor Bill Weld announced that he will be running for President of the United States, as a Republican against President Trump in 2020. He is the first Republican to challenge President Donald Trump in the 2020 race, in the video “Bill Weld Challenges Trump for GOP nomination in 2020“, below:

Bill Weld is a man of integrity, fiscally conservative centrist who would work across the isle and who cannot support President Trump.

Bill Weld, a potential GOP primary challenger to President Donald Trump, explained further why he was stepping in and why he was concerned about Trump’s leadership. Referring in an interview with CNN’s Alisyn Camerota on “New Day” to Trump’s 2017 Oval Office meeting with Russian Foreign Minister Sergey Lavrov and then-Ambassador Sergey Kislyak, former Massachusetts GOP Gov. Bill Weld said, “That showed contempt for the American people if anything I’ve ever seen does.” Weld cited the moment as one that stuck out in his mind as he gears up to mount a long-shot primary bid to challenge Trump for the Republican presidential nomination after announcing an exploratory committee, in the video “Potential GOP challenger: Trump ‘showed contempt for the American people’“, below:

“I’m trying to get us back to the Republican Party of Abraham Lincoln rather than the know-nothing anti-Catholic zealots of the 1850’s….I decided that I really want to go Mano-a-mano with Mr. Trump. There is so many things that he is doing are undermining our democratic institution that I think he is leading the country in the most fundamental way in the wrong direction and that the clearest shot is in the Republican primary.”

The first Republican to challenge Trump in the 2020 race, former Massachusetts Gov. Bill Weld, discusses the President, immigration, the Mueller report and other topics, in the video “GOP challenger Bill Weld: Trump’s policies are ‘hoax’ and ‘wall’“, below:


Former Massachusetts Governor Bill Weld announced he’s forming an exploratory committee to challenge President Trump for the Republican presidential nomination in 2020. Shira Center of the Boston Globe and CBSN political contributor Michael Graham joined CBSN to break down Weld’s potential impact on the 2020 election, in the video “Bill Weld may challenge Trump in GOP primaries“, below:
Mark McKinnon catches up with Bill Weld, former Republican Governor of Massachusetts, as he announces his potential 2020 campaign to challenge Trump in the Republican primary, in the video “Bill Weld First Republican To Challenge Trump for Presidency, BONUS Clip, THE Circus, SHOWTIME“, below: For more about Bill Weld, please refer to the excerpt from wikipedia, in italics, below:

William Floyd Weld (born July 31, 1945) is an American attorney, businessman, and Republican politician who served as the 68th Governor of Massachusetts from 1991 to 1997 and the Libertarian Party’s nominee for Vice President of the United States in the 2016 election, sharing the ticket with Gary Johnson. He is formally running to seek the Republican nomination for President of the United States in 2020.

In 1990, Weld was elected Governor of Massachusetts and reelected by the largest margin in Massachusetts history in the 1994 election. In 1996, he was the Republican nominee for the United States Senate, losing to Democratic incumbent John Kerry. He resigned as governor in 1997 to focus on his nomination by President Bill Clinton to serve as United States Ambassador to Mexico, but because of opposition by the social conservative Senate Foreign Relations committee Chairman Jesse Helms, he was denied a hearing before the Foreign Relations committee and withdrew his nomination.

In recent years, Weld has become involved in presidential politics. In 2016, he left the Republican Party to become the Libertarian Party running mate of former Governor of New Mexico Gary Johnson. Johnson and Weld were the first presidential ticket since 1948 to consist of two state governors. They jointly received nearly 4.5 million popular votes, the best showing ever for a Libertarian ticket, and the best for any third party since 1996. After returning to the Republican Party in 2019, Weld announced on April 15 that he will challenge President Donald Trump in the 2020 Republican primaries.

Any one who is interested in helping with Bill Weld’s campaign, please visit: https://www.weld2020.org