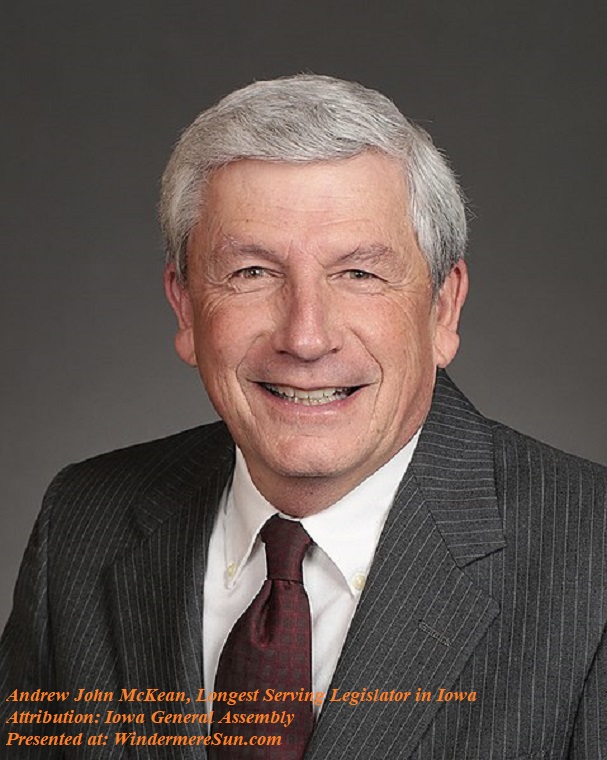 On Tuesday, April 23, 2019, McKean made the statement to switch party during a press conference at the Iowa Capitol, in the video “Longtime GOP Lawmaker Andy McKean Switches Parties And Cites Trump, Time“, below:

More on Andy McKean in the excerpt from Wikipedia, in italics, below:

Andrew John McKean (born June 23, 1949) is an American politician in the state of Iowa. Andrew John McKean was born in the New York City borough of Manhattan on June 23, 1949, the eldest son of Elly (née Mayer; 1916–2016) and Lloyd George McKean (1919–2002). His great-grandfather, John McKean (1835–1891), was a judge in Jones County, Iowa, and served in the Iowa General Assembly. The family eventually settled in Westchester County, New York, and McKean attended public schools in Greenburgh. McKean later attended State University of New York at Oneonta, the University of Rhode Island, where he received a Master of City Planning degree, and law school at the University of Iowa.

On April 23, 2019, McKean announced his change of party affiliation from Republican to Democratic.[3] He cited President Donald Trump and the growing partisanship of Republicans as his reasons for the decision.[4]