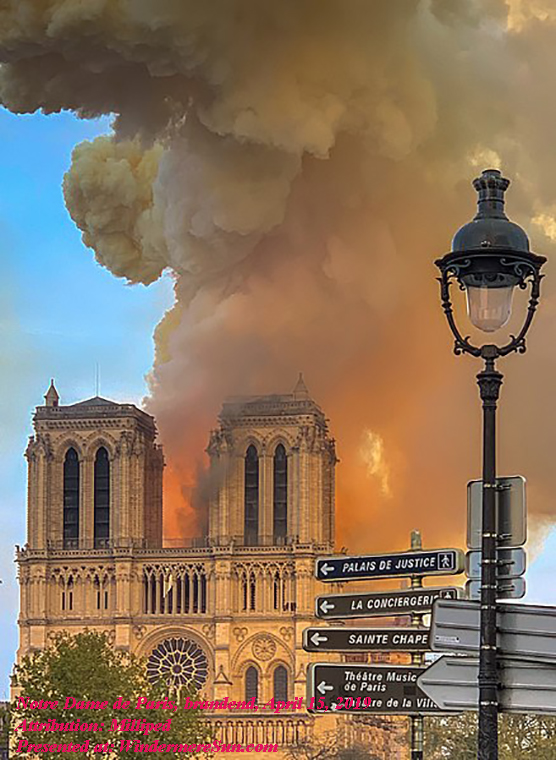 Notre Dame on fire, view from Saint-Michel an hour into the fire (Attribution: Milliped, Presented at: WindermereSun.com) 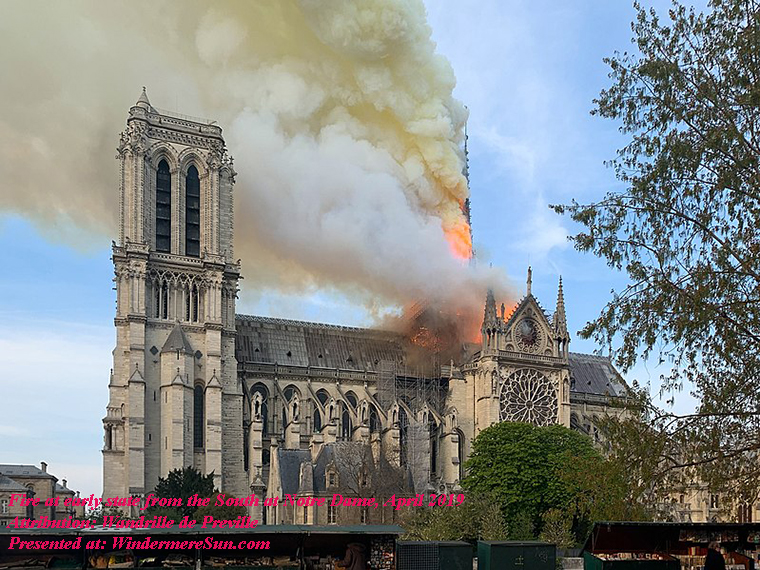 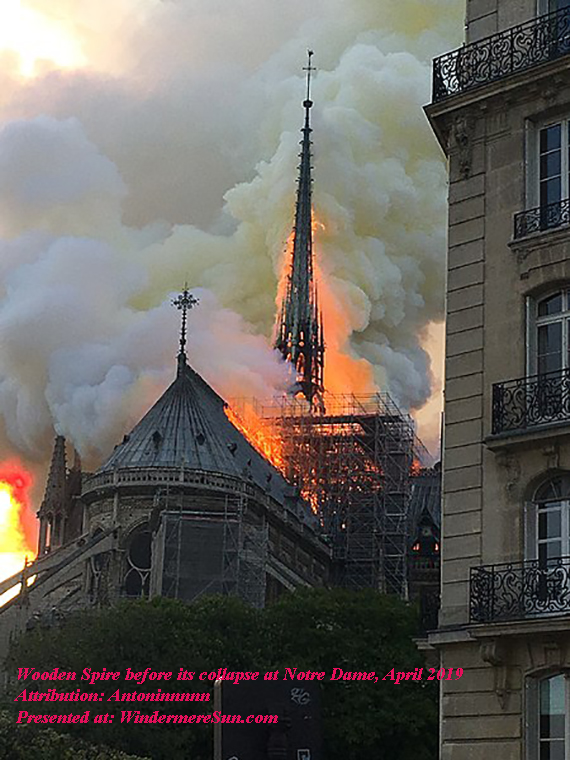 Wooden spire before its collapse at Notre Dame, April of 2019 (Attribution: Antoninnnn, Presented at: WindermereSun.com)

While undergoing renovation and restoration, the roof of Notre-Dame caught fire on the evening of April 15, 2019. Burning for around 15 hours, the cathedral sustained serious damage, including the destruction of the spire and most of the lead-covered wooden roof above the stone vaulted ceiling. The video “Notre Dame fire: Historic cathedral could be lost forever as flames continue to burn in Paris“, below:

Just before 18:50 CEST, on April 15, 2019, a fire broke out beneath the roof of Notre-Dame Cathedral in Paris. By the time the fire was extinguished fifteen hours later, the building’s spire and roof had collapsed and its interior, upper walls, and windows had suffered severe damage; even more extensive damage to the interior was prevented by the stone vaulted ceiling, which largely contained the burning roof as it collapsed. Many works of art and other treasures were evacuated early in the emergency, but many others were damaged or destroyed. The cathedral’s two pipe organs, and its three 13th-century rose windows, suffered little or no damage.

In order to extinguish the Notre Dame Cathedral fire, it took more than hundreds of first responders, but also modern technology. A water cannon robot called Colossus was sent in, being able to withstand water exposure and thermal radiation. Paris fighters also utilized drones to obtain bird’s eye views of the flames’ progression and to identify key areas to aim hoses. These flying and water-spouting gadgets helped to contain the blaze of this 850 year old cathedral. The video “How tech helped put out the Notre Dame Cathedral fire“, below:


President Emmanuel Macron promised that France would restore the cathedral and launched a fundraising campaign bringing in pledges of €800 million within 24 hours. It has been estimated that restoration could require twenty years or more. Within a day after the tragic fire that destroyed much of Notre Dame Cathedral in Paris, donations have flooded in, with nearly $1 billion just from a handful of French wealthy citizens and companies, to fund the rebuilding of this 850 year old landmark. The video “Notre Dame: Priceless artifacts saved from blaze, BBC News“, below: About ten hours ago, church bells tolled throughout Paris, throughout France and even in some churches in Chicago and elsewhere,  in aftermath of cathedral fire of Notre Dame, in the video “Notre Dame Fire: Churches in Paris ring bells in honor cathedral, ABC New“, below: Notre Dame Cathedral will be repaired/rebuilt, with the help from people from all over the world. It is a question of time.