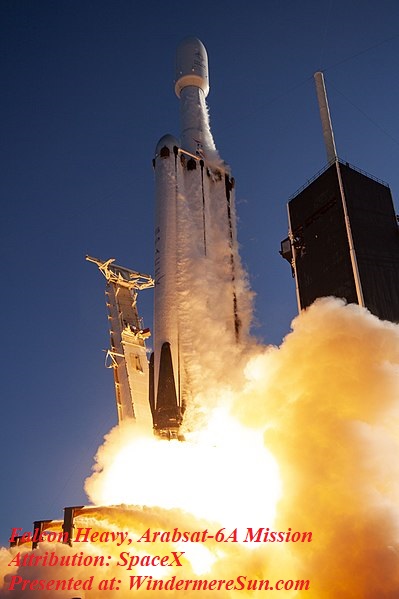 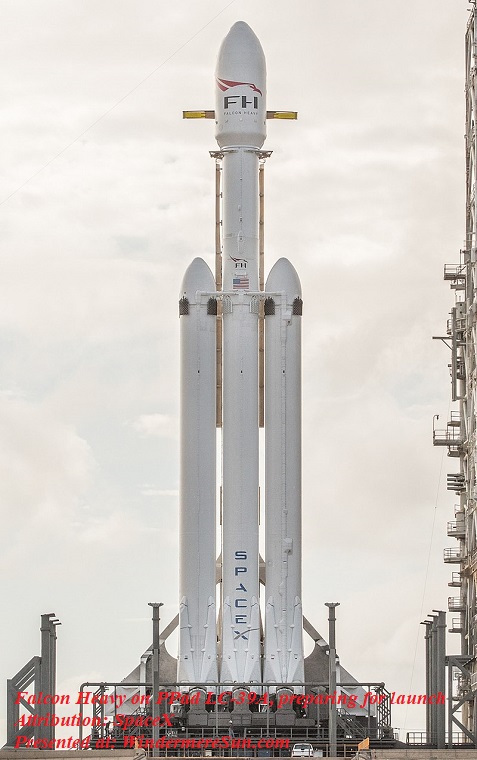 SpaceX is targeting Thursday, April 11, 2019, for a Falcon Heavy launch of the Arabsat-6A satellite from Launch Complex 39A (LC-39A) at NASA’s Kennedy Space Center in Florida. The primary launch window opens at 6:35 p.m. EDT, or 22:35 UTC, and closes at 8:31 p.m. EDT, or 00:31 UTC on Friday, April 12. The satellite will be deployed approximately 34 minutes after liftoff. Following booster separation, Falcon Heavy’s two side boosters will attempt to land at SpaceX’s Landing Zones 1 and 2 (LZ-1 and LZ-2) at Cape Canaveral Air Force Station in Florida. Falcon Heavy’s center core will attempt to land on the “Of Course I Still Love You” droneship, which will be stationed in the Atlantic Ocean, in the video “Arabsat-6A Mission”, below:

Truly, it never gets old! Great Job, SpaceX!!! In the video “SPACEX FALCON HEAVY Launch Plus Booster Landings“, below:

Video “Arabsat-6A Mission” below: A SpaceX Falcon Heavy rocket will launch the Arabsat 6A communications satellite from Kennedy Space Center’s historic Launch Pad 39A, in the video “WATCH NOW: SpaceX to Launch Falcon Heavy Rocket, #Nasa @ Kennedy Space Center, 5:35 pm“, below: For SpaceX’s Arabsat-6A mission, a Falcon Heavy rocket launched the Arabsat-6A telecommunications satellite from Launch Complex 39A (LC-39A), at NASA’s Kennedy Space Center, Florida, on 11 April 2019, at 22:35 UTC (18:35 EDT). Following booster separation, Falcon Heavy’s two side boosters (Block 5 B1052 and B1053) landed at SpaceX’s Landing Zones 1 and 2 (LZ-1 and LZ-2) at Cape Canaveral Air Force Station in Florida. Falcon Heavy’s center core (Block 5 B1055) landed on the “Of Course I Still Love You” droneship, stationed in the Atlantic Ocean, in the video “Falcon Heavy launch with Arabsat-6A“, below: For more on Falcon Heavy, check out SpaceX web site by clicking HERE.

For more on Falcon Heavy, please check out the excerpt from wikipedia, in italics, below:

Falcon Heavy is a partially reusable heavy-lift launch vehicle designed and manufactured by SpaceX. It is derived from the Falcon 9 vehicle and consists of a strengthened Falcon 9 first stage as a central core with two additional first stages as strap-on boosters.[8] Falcon Heavy has the highest payload capacity of any currently operational launch vehicle, and the third-highest capacity of any rocket ever to reach orbit, trailing the American Saturn V and the Soviet Energia.

Falcon Heavy was designed to carry humans into space beyond low Earth orbit, although as of February 2018, Musk does not plan to apply for a human-rating certification to carry NASAastronauts.[11] Falcon Heavy and Falcon 9 will be replaced by the Starship and Super Heavy launch system.[12]