Breakdancing Will Be Part of the Summer Olympics 2024 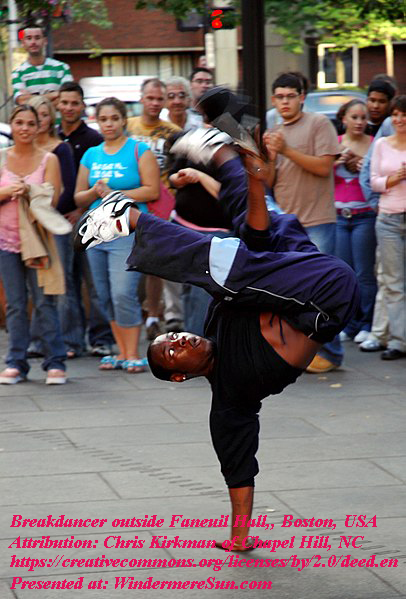 Have you ever been mesmerized by the flow of rhythmic  and often gravity-defying moves  of a breakdancer? Out of the back yard of the Bronx, the most original art form of American folk dance of sort, the Breakdance, was born. This year, the Paris Olympics organizers are proposing to add breakdancing to the roster in the 2024 Summer Games in Paris. The International Olympic Committee said the idea fits with its goal of making the Olympics “gender-balanced, more youth-focused and more urban.”

A practitioner of this dance is called a b-boy, b-girl, or breaker. Although the term “breakdance” is frequently used to refer to the dance in popular culture and in the mainstream entertainment industry, “b-boying” and “breaking” are the original terms and are preferred by the majority of the pioneers and most notable practitioners.

Breakdancing was part of the Youth Olympic Games in Buenos Aires 2018, with participants competing as b-girls, b-boys, and on mixed teams. At the Olympics, it would simply be known as “breaking”. In Buenos Aires in 2018, the b-girl’s competition was won by Ram (Japan’s Ramu Kawai) and the b-boy’s competition was won by Bumblebee (Russia’s Sergei Chernyshev). In breaking competitions, judges will vote to decide the winner of multiple rounds of dancing, in which two dancers take turns on the floor, with rivals often doing their best not to look impressed with their opponent.


This athletic style of street dance. While diverse in the amount of variation available in the dance, breakdancing mainly consists of four kinds of movement: toprock, downrock, power moves and freezes. Breakdancing is typically set to songs containing drum breaks, especially in hip-hop, funk, soul music and breakbeat music, although modern trends allow for much wider varieties of music along certain ranges of tempo and beat patterns.
For more on Breakdancing, please refer to the excerpt from wikipedia, in italics, below:


Many elements of breakdancing can be seen in other antecedent cultures prior to the 1970s. B-boy pioneers Richard “Crazy Legs” Colon and Kenneth “Ken Swift” Gabbert, both of Rock Steady Crew, cite James Brown and Kung Fu films as influences.[23][24] Many of the acrobatic moves, such as the flare, show clear connections to gymnastics. In the 1877 book ‘Rob Roy on the Baltic’ John MacGregor describes seeing near Norrköping a ‘…young man quite alone, who was practicing over and over the most inexplicable leap in the air…he swung himself up, and then round on his hand for a point, when his upper leg described a great circle…’. The engraving shows a young man apparently breakdancing. The dance was called the Giesse Harad Polska or ‘salmon district dance’. In 1894 Thomas Edison filmed Walter Wilkins, Denny Toliver and Joe Rastus dancing and performing a “breakdown”.[25][26] Then in 1898 he filmed a young street dancer performing acrobatic headspins.[27] However, it was not until the 1970s that b-boying developed as a defined dance style in the United States. There is also evidence of this style of dancing in Kaduna, Nigeria in 1959.[28]

Beginning with DJ Kool Herc, Bronx-based DJs would take the rhythmic breakdown sections (also known as the “breaks”) of dance records and prolong them by looping them successively. The breakbeat provided a rhythmic base that allowed dancers to display their improvisational skills during the duration of the break. This led to the first battles—turn-based dance competitions between two individuals or dance crews judged with respect to creativity, skill, and musicality. These battles occurred in cyphers—circles of people gathered around the breakers. Though at its inception the earliest b-boys were “close to 90 percent African-American”, dance crews such as “SalSoul” and “Rockwell Association” were populated almost entirely by Puerto Rican-Americans.[29]