Members of the U.S. Congress Should Get Salary Increase 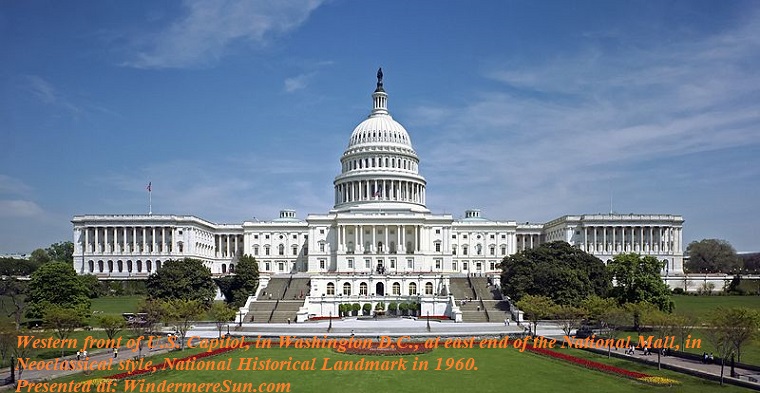 Western front of the U.S. Capitol, in Washington D.C., at east end of the National Mall, in Neoclassical style, National Historical Landmark in 1960 (Presented at: WindermereSun.com)

Rep. Alexandria Ocasio-Cortez suggested that the salaries for members of Congress should be increased to ease the financial burden on members and decrease the incentive to cheat. Studies show that increasing pay for government officials can decrease corruption.

Since Congress does control country’s purse strings and can pass spending bills, it has the most direct control over Congressional members’ salaries. However, the matter is a bit more complicated. The Constitution includes checks on Congress’ power, so the President can veto any pay bills. But, voters or U.S. citizens have the final say-so at the ballot box.

Rep. Alexandria Ocasio-Cortez, the freshman Democrat who has taken Congress by storm, recently advocated for a salary bump for Congress. But a majority of Americans actually want to see lawmakers pay get pay cuts.
Ocasio-Cortez first brought attention to the finances of lawmakers after the midterm elections with stories about her own financial struggles during the transition period between the election and the swearing-in of the new Congress.

Two main issues that we should support the increase of Congressional members’ salaries:

In order to attract well qualified individuals to the U.S. Congress and to prevent corruption, perhaps U.S. voters and U.S. Congress would consider:

After all, we want our Congressional members to be capable individuals and to have the highest possible ethical standard, regardless how much personal wealth she/he has.

To better understand “Who Decides How Much Congress Gets Paid?“, please refer to the excerpt from Congressional Institute, in italics, below:

Pay for officers of the United States is a constitutional issue. Delegates to the 1787 Constitutional Convention understood that a person’s livelihood could be used to control and corrupt them. Thus, the Framers sought to prevent such abuses of power. To that end, Article II, Section 1, states that the President’s salary may not increase or decrease during his term, nor may the Federal or state governments provide other compensation. Similarly, Article III, Section 1, states that Federal judges are entitled to a salary, which may not be decreased while in office (though increases are not prohibited).

The congressional compensation clause in the Constitution, as adopted at the Convention, does not have quite the same provisions as those for the Executive and Judicial Branches. Article I, Section 6 states, “The Senators and Representatives shall receive a Compensation for their Services, to be ascertained by Law, and paid out of the Treasury of the United States.” Three points are worth highlighting here.

First, the clause requires that pay be “ascertained by Law.” This means Congress must set its own pay. It also means that either the House or Senate could not change its salary via a simple resolution, which does not go to either the other chamber or the President for approval. Nor could the two chambers together adopt a concurrent resolution, which does not go to the President for a signature. A change in salary must be done via a bill or joint resolution, both of which are presented to the President for a signature. Thus, the President could veto a bill changing Members’ salaries if he thought it inappropriate. Congress’ ability to raise (or lower) its own salary is circumscribed by the checks and balances of the normal legislative process.

Second, the Framers used the word “shall.” This means pay for Members is obligatory, so the country could not have a “pro bono Congress.” In theory, a mere pittance for Members of Congress could satisfy this clause, but many of the Framers would disapprove of a paltry salary. Delegates to the Convention wanted to secure the services of the country’s most capable citizens. Some feared that the failure to compensate Members sufficiently would attract to office only the wealthiest and those “who were most willing to serve,” as James Madison recorded one delegate pointing out (Madison’s Notes, page 108).

The third noteworthy aspect of this clause is that the U.S. Treasury is to be the source of the funds for Member salaries. Passing over this clause without thinking much about it is easy to do, but it was actually one of the most controversial topics relating to congressional compensation at the Convention. It was seen as a way to ensure the strength of Congress. An earlier version of the clause left it to the states to pay their Members of Congress, but some delegates feared that this would make the Federal government too dependent on state governments. For instance, Edmund Randolph of Virginia argued that this would be the case. Additionally, as Nathaniel Gorham of Massachusetts pointed out, the states could cut salaries so low that the most capable Members would seek employment elsewhere (Madison’s Notes, page 171).

The congressional compensation clause as adopted was not universally satisfactory.  Elbridge Gerry of Massachusetts and Edmund Randolph refused to sign the final document in part because of the absence of limits on Congress’ power to regulate Member salaries (Anti-Federalist Papers, 167-168). (Randolph’s dissatisfaction illustrates the great difficulty in proposing proper restraints upon government power: On the one hand, as noted above, he did not wish the U.S. Congress to be too dependent on state legislatures; on the other hand, he also thought the Convention did not sufficiently limit Congress, in his opinion.) Gerry and Randolph’s objection to the compensation clause resonated outside the Convention. For instance, in June 1788, Virginia’s ratifying convention proposed an amendment to delay the effective date of statutes changing congressional compensation until after an election of Representatives had passed.

Dissatisfaction with the compensation clause led to one of the most unusual constitutional amendments in American history. On September 25, 1789, Congress sent 12 constitutional amendments to the states for ratification, including one concerning congressional compensation. Ten of proposed amendments, what are now known as the Bill of Rights, were ratified within a couple years, but the amendment on congressional compensation was not one of them. It lay almost forgotten until 1982, when a college student discovered it and pushed for its ratification after his professor gave a “C” to his paper arguing that it was still eligible for ratification. In 1992, it became the 27th Amendment to the Constitution, about 203 years after Congress initially approved it.

The 27th Amendment states, “No law, varying the compensation for the services of the Senators and Representatives, shall take effect, until an election of Representatives shall have intervened.” This means that if Congress votes to increase or decrease pay for Members, it would not go into effect immediately; the earliest it could go into effect is after the following general election. This could actually mean that it is quite some time before a pay change goes into effect. For instance, if Congress were to vote on a change in pay during the lame duck session following a general election, the next “election of Representatives” would be almost two years later. The 27th Amendment allows the public to hold Members accountable at the ballot box if they think that Congress acted wrongly.

Aside from the constitutional restraints on Congress’ ability to vote raises for its Members, constituents are the greatest check on public opinion. Members know constituents are skeptical of congressional pay increases, so they hate voting for them. Throughout congressional history, there have been a number of times when Congress approved a pay raise and then rescinded it. For instance, Members were initially paid on a per diem basis, but in 1817, Congress voted to switch to an annual salary. The public outcry was so great that the law was repealed and Congress did not finally approve an annual salary until 1855. In 1873, Congress enacted a substantial pay raise for civil servants, including the President and themselves. The public was so enraged that the law as dubbed the “Salary Grab Act,” and it was a major issue during the congressional elections that year. There were other reasons for public dissatisfaction, but many Members were defeated, and the law was repealed.

So, to return to the original question: Who decides how much to pay Members of Congress? The Members decide a level for compensation, the President signs off on the salary laws they pass, and the public may express its approval or disapproval in any way that is lawful—especially at the ballot box. Skepticism of the Members’ power to determine their own salaries is warranted, but there are legal and, as history has shown, political constraints on this power. As with almost everything else, Members can do only as much as the public allows.

For more information on congressional pay, also see “How Much Do Members of Congress Get Paid?“