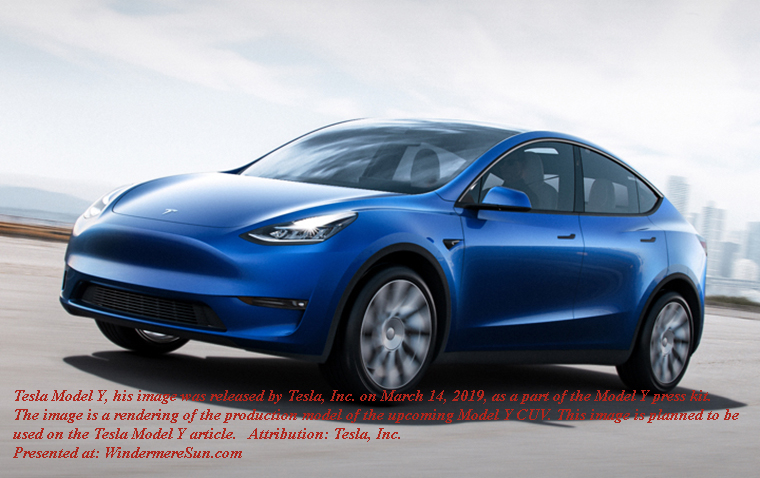 
Elon Musk finally unveiled Tesla’s Model Y (some call it Tesla’s Model Y CUV, a cross-over utility vehicle, some call it Tesla’s Model Y SUV)  on Thursday, March 14th. The vehicle is derived from the Model 3, but taller and longer than Model 3 and can seat 7, with about 75% of the components being the same. The car can go from 0-60 in 3.5 seconds, with the standard model having a range of 230 miles (please refer to the spec table at the end of this post). This CUV or SUV will start at $39,000, with the long-range model costing $47,000. Tesla’s Model Y will be available in Fall of 2020. With the Model Y, Musk completes his plan to have the Tesla models spell “S-E-X-Y.” in the video “Watch Elon Musk Unveil The Tesla Model Y SUV“, below:  A 300-mile range, seven seats, 15 inch touchscreen, and 0-60mph times that match a Porsche 911 – find out everything you need to know about the new Tesla Model Y electric SUV, in the video “2020 Tesla Model Y electric SUV revealed-price, specs, release date, What car?“, below: Loup Ventures co-founder Gene Munster discusses the unveiling of Tesla Inc.‘s Model Y crossover, Apple Inc. firing back at Spotify’s antitrust complaint and Qualcomm winning the first U.S. jury trial in its global dispute with Apple. He speaks with Bloomberg’s Emily Chang on “Bloomberg Technology.” in the video “Loup’s Munster Weighs In on Tesla Model Y, Apple Versus Spotify and Qualcomm“, below: For more on Tesla’s Model Y, check out the excerpt from wikipedia, in italics, below:

The Tesla Model Y is an upcoming electric compact crossover utility vehicle (CUV) manufactured and sold by Tesla, Inc.[1] It was unveiled in March 2019, with deliveries starting in late 2020.[2] It is Tesla’s second vehicle built upon the tier 3 mass market vehicle platform, alongside the Model 3.[3] Model Y will offer optional third row seats for a seven passenger capacity.[4]

There are currently four planned powertrains for the Model Y: Standard Range, Long Range, Long Range with Dual Motor All-Wheel Drive, and Performance. All models are planned to be available by late 2020, apart from the Standard Range model, which is planned to enter production in early 2021.[5]The vehicle lineup of Tesla now forms “semi-SEXY (S3XY) roadster”.[6][7] The Model Y fills a smaller size segment from its bigger sibling, the tier 2 premium market Tesla Model X crossover sport utility vehicle (XUV).[8]

In 2017, the Model Y’s silhouette was teased to Tesla shareholders at the annual general meeting in June.[11] Elon Musk also announced that the Model Y would be produced in a new factory, as it was not likely that the Fremont plant would have room to accommodate another production line.[12]

In June 2018, a new silhouette was revealed by CEO Musk. With the new image, it was stated that the Model Y would be formally announced in March 2019.[13] The Model Y announcement had been planned for 2018, however production problems with the Model 3 resulted in it being pushed to 2019.[14]In October 2018, Elon Musk revealed that he has approved the finalized design for the first production version of the Model Y, however production would not start until 2020.[15]

On 3 March 2019, Elon Musk published multiple tweets, announcing the unveiling event and confirming some specifications.[16] Musk confirmed the vehicle will use standard doors, as opposed to the falcon-wing doors used on the Model X.[17]

On 14 March 2019, Elon Musk debuted the Tesla Model Y at an event at Tesla’s design studio in Hawthorne, CA, where specifications were announced and the vehicle was shown. Test drives of multiple Model Y vehicles were also offered to attendees after the presentation.[2][18]