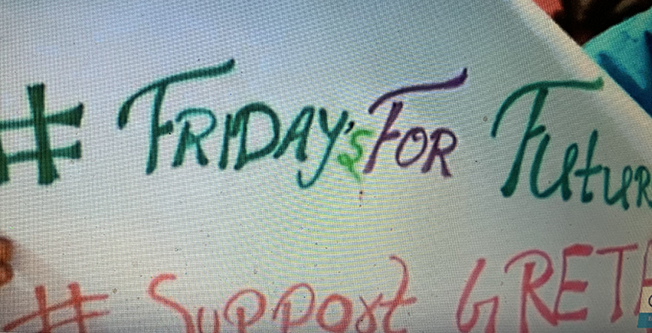 Global warming is a long-term rise in the average temperature of the Earth’s climate system, an aspect of climate change shown by temperature measurements by multiple effects of the warming.

On Friday, March 15, 2019, tens of thousands of teens and students from 72-100 countries are skipping schools, demanding action on climate change internationally. The protest is known as #FridaysForFuture and School Strike 4 Climate. It is inspired by Greta Thunberg, a Swedish 16 year old who has spent every Friday since August camping outside the Swedish parliament. She also gave a speech at Davos 2019 in Switzerland, imploring world leaders to help fight climate change. Thunberg commented, “Adults keep saying, ‘We owe it to the young people to give them hope’. But I don’t want your hope. I don’t want you to be hopeful. I want you to panic. I want you to feel the fear I feel every day. And then I want you to act.”

Greta Thunberg realized at a young age the lapse in what several climate experts were saying and in the actions that were being taken in society. The difference was so drastic in her opinion that she decided to take matters into her own hands. Greta is a 15-year-old Stockholm native who lives at home with her parents and sister Beata. She’s a 9th grader in Stockholm who enjoys spending her spare time riding Icelandic horses, spending time with her families two dogs, Moses and Roxy. She love animals and has a passion for books and science. At a young age, she became interested in the environment and convinced her family to adopt a sustainable lifestyle. This talk was given at a TEDx event using the TED conference format but independently organized by a local community, in the video “School strike for climate -save the world by changing the rules, Greta Thunberg, TEDxStockholm“, below:


In this passionate call to action, 16-year-old climate activist Greta Thunberg explains why, in August 2018, she walked out of school and organized a strike to raise awareness of global warming, protesting outside the Swedish parliament and grabbing the world’s attention. “The climate crisis has already been solved. We already have all the facts and solutions,” Thunberg says. “All we have to do is to wake up and change.” in the video “The disarming case to act right now on climate change, Greta Thunberg“, below:
The protesters’ specific climate demands differ by region. For example, students in Australia seek to stop the Adani mine, a large coal mine they fear will hurt the Great Barrier Reef, while students in the U.S. will advocate for the Green New Deal, a progressive piece of climate legislation that is popular among the youth-led climate initiatives, like Sunrise Movement and Zero Hour. The March 15 protest is not the first of its kind. Numerous school walk out protests inspired by Thunberg have taken place in Belgium, Germany, and France. These youth activists will rally behind one common cause: to hold elected leaders accountable for inaction on climate change. Since young people will have to endure the effects of a warmer world. A UN climate report released in October, 2018 warns that global temperatures could increase by 2.7 degrees Fahrenheit above pre-industrial levels by 2040. If the rate of greenhouse gas emissions continues at the current rate, scientists say this could cause flooding along coastlines, intensified droughts, and poverty.
FridaysForFuture Activists stated, Letter in the Guardian, March 1, 2019, in italics, below:

“We finally need to treat the climate crisis as a crisis. It is the biggest threat in human history and we will not accept the world’s decision-makers’ inaction that threatens our entire civilization. We will not accept a life in fear and devastation. We have the right to live our dreams and hopes. Climate change is already happening. People did die, are dying and will die because of it, but we can and will stop this madness.“