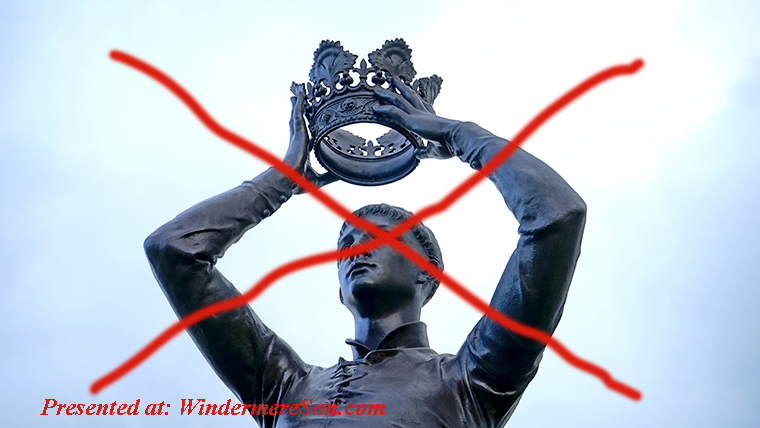 Not A King (presented at: WindermereSun.com)

Twelve Republican Senators joined Democratic Senators on Thursday, March 14, 2019, to overturn President Trump’s national emergency declaration at the southern border, stating that the president had exceeded his powers in attempting to obtain funding for border wall, despite Congress’ objections. These Republican Senators stood up for the U.S. Constitution, defending the separation of powers of three branches of the government. They realized that this vote should not be a test of loyalty, but a test of constitutionality. America is a land of democracy, not a land of king.


Republican Senator Lamar Alexander of Tennessee said,”Never before has a president asked for funding, Congress has not provided it, and the president then has used the National Emergencies Act of 1976 to spend the money anyway. Our founders gave Congress the power to approve all spending so that the president would not have too much power. This check on the executive branch is a crucial source of our freedom.”

The Senate voted 59-41 to cancel Trump’s February proclamation of a border emergency, which he invoked to spend $3.6 billion more for border barriers than Congress had approved. Twelve Republicans joined Democrats in defying Trump in a showdown many GOP senators had hoped to avoid because he commands die-hard loyalty from millions of conservative voters who could punish defecting lawmakers in next year’s elections, in the video “Senate votes to block Donald Trump’s emergency declaration“, below:

The video “Senate blocks Trump’s National Emergency Declaration“, below: The Senate defied President Trump on Thursday, with 12 Republicans helping to form a decisive majority to block his declaration of a national emergency over immigration. But the 59-41 vote wasn’t a large enough of majority to overturn a veto, and Trump vowed immediately to use one–the first of his presidency. Judy Woodruff talks to Lisa Desjardins and Yamiche Alcindor about the “stunning rebuke.” in the video “With blocked emergency declaration, Senate delivers Trump a ‘stunning rebuke‘”, below:
Gathered, written, and posted by Windermere Sun-Susan Sun Nunamaker
More about the community at www.WindermereSun.com