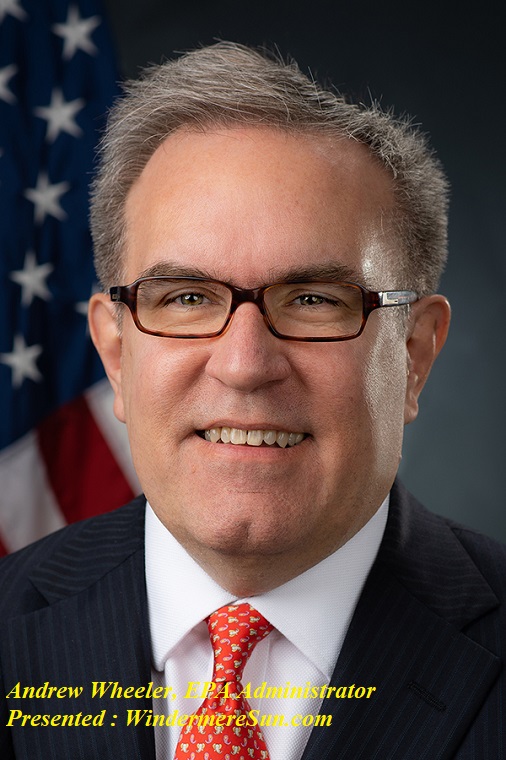 Scott Pruitt‘s resignation in 2018 means that former coal lobbyist Andrew Wheeler is now the Acting EPA administrator (Andrew Wheeler was confirmed to be the Deputy Administrator of the EPA on April 12, 2018). Instead of having an administrator being influenced by lobbyist, now there is actually a coal lobbyist in charge of EPA. There has been much rumor that Mr. Wheeler would use his insider knowledge to protect polluters rather than to protect our air, water, and climate.

The Senate is expected to vote on the confirmation of Acting Environmental Protection Agency administrator Andrew Wheeler, about an hour ago today, Thursday, Feb. 28, 2019, in the video “Senate expected to vote on Wheeler’s nomination to lead the EPA“, below:

At 3:07:43, votes are in, with 52 Yeas and 47 Nays, the nomination is confirmed. The former coal lobbyist, Andrew Wheeler, is now the head of the EPA. Under the previous order, the motion to reconsider is considered, made, and laid upon the table, and the president will be immediately notified of the Senate’s action.

In his confirmation hearing before the Senate Environment and Public Works Committee, EPA Administrator Nominee Andrew Wheeler was asked by Sen. Bernie Sanders (I-VT) whether he thought climate change was a global crisis. “I would not call it the greatest crisis, no sir,” Mr. Wheeler replied, but continued, “I consider it a huge issue that has to be addressed globally.” in the video “Word for Word: EPA Administration Nominee Andrew Wheeler on Climate Change (C-SPAN)“, below:
‘In this hearing you’re putting up a smokescreen to ensure that there is an advancement of Donald Trump’s dirty policies’ — Sen. Ed Markey pushed Trump’s pick to head the EPA on the global climate crisis, in the video “Sen. Markey Scorches EPA Nominee Andrew Wheeler on Climate Change, Now This“, below:
Acting EPA administrator Andrew Wheeler said despite decades of both environmental and economic progress, it’s the Americans who have not shared in the progress who are the focus of the Trump administration. “How can these Americans prosper if they can not live, learn or work in healthy environments? The answer is simple; they cannot.” in the video “WATCH: Wheeler says Trump EPA policy focused on ‘putting Americans first’“, below:
Photographed, gathered, written, and posted by Windermere Sun-Susan Sun Nunamaker
More about the community at www.WindermereSun.com
Any comments, suggestions, concerns regarding this post will be welcomed at [email protected]