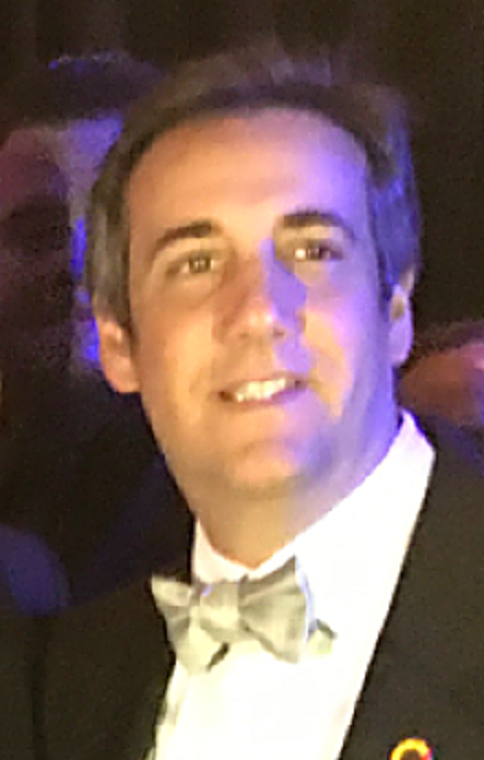 As Rep. Elijah Cummings, toward the end of the video above, quoted from Martin Luther King, Jr., “…There comes a time when silence becomes betrayal. Our lives begin to end the day we become silent about things that truly matter. In the end, we will not remember the words of our enemies, but silence of our friends.” Rep. Cummings, the committee chairman, began the hearing with a line of questions about the hush money payments Cohen made to adult film actress Stormy Daniels (real name: Stephanie Clifford), and his reimbursement by Trump. “The president said he knew nothing of these favors,” Cumming stated. “Based on your conversation with him, is there any doubt in your mind that President Trump knew exactly what he was paying for?”

Cohen responded, “There is no doubt in my mind and I truly believe there is no doubt in the people of the United States of America.” Cohen presented a copy of a $35,000 check Trump allegedly wrote ( signed by President Donald Trump to Michael Cohen), after Trump took office, to reimburse Cohen for the hush money payment. The Trump Organization responded that Donald Trump Jr. had “no concept/idea” that he  was signing a check to reimburse Cohen for Stormy Daniels hush money payment. The Trump Organization claimed that Donald Trump Jr. signed the $35,000 check as a trustee of the Donald J. Trump Revocable Trust. A neutral handwriting expert can easily resolve this mystery, whether it was the father or the son who actually signed the check. Whoever signed that check would be in serious trouble. The reason that Trump Organization would say it was Donald Trump Jr. who had no idea what he was signing is due to the distinction between a campaign finance violation that is a crime vs. a campaign finance violation that is a civil matter. According to Paul S. Ryan, the Vice President of Policy & Litigation at Common Cause (the non-partisan organization that filed complaints with the Department of Justice and the Federal Election Commission earlier this year regarding these payments.), “The difference between a campaign finance violation that is a crime and a campaign finance violation is a civil matter is whether the action was taking knowingly and willfully.”


A new draft of Michael Cohen’s testimony obtained by NBC News says Cohen is giving House investigators other checks to reimburse him for hush money to Stormy Daniels. These checks are signed by Donald Trump Jr. and Allen Weisselberg, in the video “President Trump Jr. Signed ‘Hush Money’ Check, According To Michael Cohen, Morning Joe, MSNBC“, below: Testifying publicly for the first time, Mr. Cohen regrets that he had protected Donald Trump for over 10 years despite the fact that Trump was and is  a racist, cheat,  a liar, and a con-man. He painted a harsh portrait of the Trump as an unscrupulous businessman who may have committed a crime while in office. He also claimed that Trump, as a candidate, knew that his confidant Roger Stone was talking with Julian Assange about WikiLeaks‘ revealing of emails from the Democratic National Committee.  When asked what led him to turn on his long-time boss, Mr. Trump, Michael Cohen stated, “Helsinki, Charlottesville, watching the daily destruction of our civility to one another, putting up with silly things like this…..It’s really unbecoming of Congress.” Cohen said he used to protect Trump the way Republican members of the House Oversight Committee are protecting the president during the hearing, in the video “Cohen calls Trump a racist: ‘In private, he’s even worse’“, below:
Cohen also described what he said was the extent of Trump’s involvement in the Trump Tower Moscow negotiations during the campaign, “After each communication that I had about the Trump Tower Moscow project, I would report back to Trump and our goal was to get this project….We were interested in building what would have been the largest building of all of Europe.” In his opening statement, Cohen said Trump remained involved in negotiations and often asked Cohen, “How’s it going in Russia?” In November, Michael Cohen pleaded guilty to lying to Congress about whether Trump and his company had pursued a Moscow real estate project while Trump was pursuing the GOP nomination in 2016.

At about 11:12 am., Cohen said that he believes President Trump and his children may have been “conflicted or compromised” by Russia during the 2016 presidential campaign.

Rep. Elijah Cummings (D-MD) concluded the House Oversight Committee’s questioning of President Donald Trump’s former personal lawyer Michael Cohen by delivering a call to “keep democracy in tact” and a return to normalcy in the political arena, in the video “Elijah Cummings’ stunning closing remarks at Cohen hearing“, below:


Rep. Elijah Cummings (D-Md.) speaks to reporters after Michael Cohen’s testimony and says Congress has an important job to do, in the video “Elijah Cummings: ‘200 Years From Now, People Will Be Reading About This Moment’, MTP Daily, MSNBC“, below:
Further analysis by Rebecca Wright, in the video, “Rebecca Wright analyses Michael Cohen’s testimony” About a month ago, in an exclusive interview, Michael Cohen’s legal advisor, Lanny Davis, joins MSNBC Chief Legal Correspondent Ari Melber, to discuss the bombshell revelation that Trump’s former lawyer will testify before the House Oversight Committee in a public, on-camera hearing, weeks before he reports to prison. In a wide-ranging interview, Davis reveals that he has had “constructive discussions” about Cohen potentially appearing before other House Committees, that the days of Cohen “lying for Trump are over”, in the video “Michael Cohen’s Lawyer On How Cohen Will Expose Trump To Congress, The Beat With Ari Melber, MSNBC“, below: Michael Cohen’s legal advisor, Lanny Davis, is not being paid by Michael Cohen and any one who is interested in helping with Michael Cohen’s legal bills, please go to Michael Cohen Truth Fund at GoFundMe, at: https://www.gofundme.com/hqjupj-michael-cohen-truth-fund

Michael Cohen also commented, “‘I fear’ Trump won’t peacefully give up the White House if he loses the 2020 election.”

MSNBC’s Katy Tur talks to Ari Melber and former federal prosecutor Glenn Kirschner about Michael Cohen’s testimony in front of the House committee. Kirschner points out the the testimony alleges the president conspired to violate campaign finance law continued well into the White House, in the video “Ari Melber: Extraordinary Testimony, ‘Damning Series of Allegations’,MSNBC“, below:
Gathered, written, and posted by Windermere Sun-Susan Sun Nunamaker
More about the community at www.WindermereSun.com