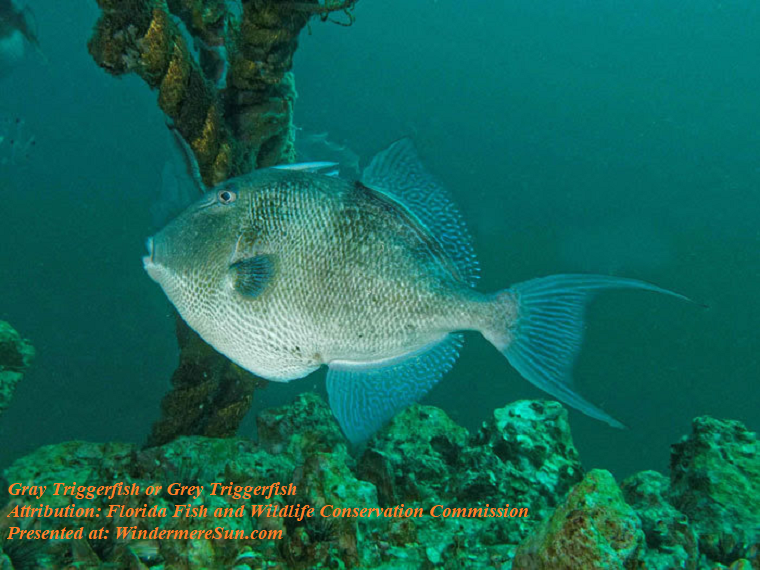 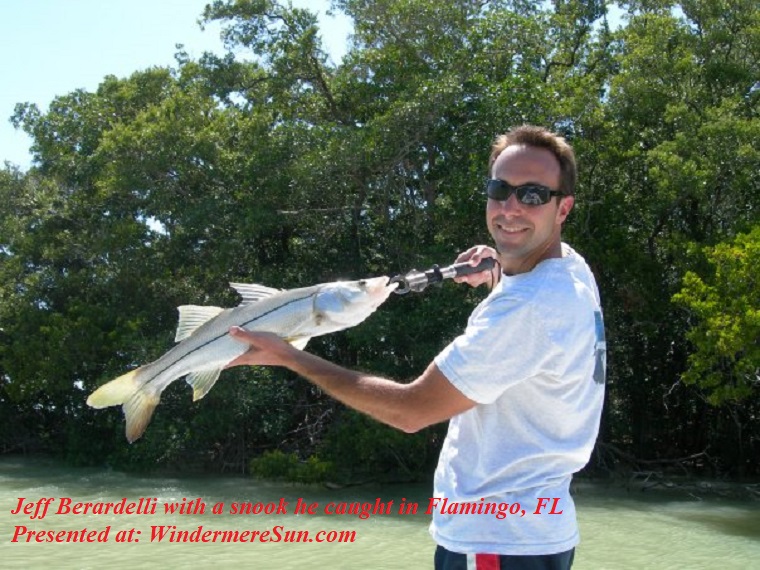 Jeff Berardelli with a snook he caught in Flamingo, FL (presented at: WindermereSun.com)

Just received a message from Florida Fish and Wildlife Conservation Commission, in italics, announcing that gray triggerfish (or grey triggerfish) and snook will open March 1, 2019, in Gulf  state and federal waters, below:

The recreational gray triggerfish and snook seasons will reopen to harvest in Gulf state and federal waters March 1. Snook remains catch-and-release only through May 10 in Gulf state waters from the Pasco – Hernando county line through Gordon Pass in Collier County due to impacts from red tide.

If you plan to fish for gray triggerfish in Gulf state or federal waters, excluding Monroe County, from a private recreational vessel, you must sign up as a Gulf Reef Fish Angler (annual renewal is required). To learn more, visit MyFWC.com/Marine and click on “Recreational Regulations” and “Gulf Reef Fish Survey” under “Reef Fish.” Sign up today at GoOutdoorsFlorida.com.


Learn more about gray triggerfish regulations at MyFWC.com/Marine by clicking on “Recreational Regulations” and “Triggerfish,” which is located under the “Reef Fish” tab.

Learn more about snook regulations at MyFWC.com/Marine by clicking on “Recreational Regulations” and “Snook,” which is located under the “General Species” tab.


The grey triggerfish or gray triggerfish (Balistes capriscus) is a ray-finned fish in the triggerfish family. The species is native to shallow parts of the western Atlantic from Nova Scotia to Argentina and also the eastern Atlantic, the Mediterranean Sea and off Angola on the west coast of Africa. In its appearance and habits, the grey triggerfish is a typical member of the genus Balistes except for its drab, uniformly grey colouration. It is a relatively small fish, usually less than 2.3 kg (5 lb) in weight. It is fished recreationally and despite its tough skin, is an excellent food-fish. The grey triggerfish is principally a fish of shallow waters in the western Atlantic Ocean. Its native range extends from Nova Scotia to the Caribbean Sea, the Gulf of Mexico and Bermuda, and southwards to Argentina. It is typically found over hard bottoms on reefs and rocky areas, in lagoons and in bays, at depths down to about 55 m (180 ft). It is also found on the other side of the Atlantic, around the British Isles, in the Mediterranean Sea and off the coast of Angola.[3] It may have crossed the Atlantic as a result of the movement of water in the Gulf Stream. It does not breed in the waters around Britain but does do so in the Mediterranean.[4]

Locomotion in the grey triggerfish is by means of undulations of the dorsal fins. If threatened, the fish can work its way into a protective crevice and wedge itself in place by erecting its front dorsal spine. It is difficult to dislodge from this position. The second spine is connected to the first and when it is depressed, it triggers the unlocking of the first spine.[3] The grey triggerfish is a demersal species and feeds on bottom-dwelling invertebrates such as shrimps, crabs, molluscs, sea urchins, sand dollars, starfish and sea cucumbers. It has strong teeth specialised for making holes in hard-shelled prey. An interesting feeding behaviour has been observed, in which the fish positions itself vertically above a sandy seabed and puffs a stream of water out of its mouth. This disturbs the substrate and may reveal something edible. Further puffs expose more, and the prey item is gripped with the fish’s sharp teeth and removed from the seabed. If it is a sand dollar, the fish drops it and picks it up again several times until the prey lands upside down. The fish then adopts its vertical stance once more and attacks the middle with closed jaws, crushing the soft central area. It then scoops out and devours the flesh.[3] Males develop a charcoal grey colouration and are highly territorial during the breeding season, which commences in summer when the water temperature reaches about 21 °C (70 °F). The males prepare up to a dozen nests in hollows blown out of sandy seabed[5] and then patrol the area, driving unwanted fish away. The females roam around inspecting the nest sites. When a female is ready to spawn, both male and female enter a nest and tightly circle round each other while she lays large numbers of minute eggs and he fertilizes them. The female stays in the nest, guarding the eggs and blowing and fanning them. The male defends his territory, which may contain other nests with females guarding their eggs. In this way, the male exhibits harem behaviour.[6] Wrasses and red snappers sometimes feed on the eggs which, if they survive that long, hatch after about fifty hours. The fish larvae migrate up towards the surface of the water where they often become part of the community depending on floating sargassum weed. There they feed on algae, barnacles, hydroids and polychaete worms. In the autumn, when they reach about 15 cm (6 in), the juvenile fish leave the sargassum and sink down to the sea bed.[3]

The grey triggerfish is fished recreationally around Florida and elsewhere. It is known as a notorious bait stealer and is found over hard bottom in 20 to 40 m (66 to 131 ft) depths off the Atlantic Coast of Florida, often in association with black sea bass and red snapper. Because of its bony mouth it needs a small sharp hook which is usually baited with squid or cut bait.[7] The flesh is of high quality but the consumption of this fish has been linked to isolated cases of ciguatera poisoning.[3]

One of the largest snooks, C. undecimalis grows to a maximum overall length of 140 cm (4.6 ft), but common length is 50 cm (1.6 ft). The IGFA world record is 24.32 kg (53 lb 10 oz) caught in Parismina Ranch, Costa Rica, by Rafael Montalvo.[1][2] Of typical centropomid form, it possesses drab coloration except for a distinctive black lateral line. It can also have bright yellow pelvic and caudal fins, especially during spawn.[3]

The common snook is a protandric hermaphrodite fish species.[4] The common snook’s spawning season appears to span the months of April to October, with the peak spawning occurring during July and August.[5] Spawning typically occurs in near-shore waters with high salinities.[6] Following the spawning period, the juveniles then migrate to the brackish waters of the nearby estuarine environments.[6] When these juveniles mature, they return to the higher-salinity waters of the open ocean to join the breeding population.[6]

The common snook is an estuarine-dependent fish species.[7] Within estuaries, juvenile common snook are most often found inhabiting areas such as coastal wetland ponds, island networks, and creeks.[8] Despite being a euryhaline species of fish, the common snook does show a tendency to gravitate towards lower-salinity conditions in the early stages of its life.[9] By being able to adapt and thrive in both high- and low-salinity conditions through osmoregulation, common snook display a high level of habitat plasticity.[10] Common snook are opportunistic predators whose feeding habits indicate a positive relationship between their size and the size of their prey, meaning that as the snook grows, it feeds on larger and larger prey.[11] Common snook have been found to occasionally engage in cannibalism, though this behavior is rare.[12] This usually occurs during the winter when adult and juvenile common snook are in close proximity to one another within their estuarine habitats.[12] This form of cannibalism where the juveniles are fed on by the adults is referred to as intercohort cannibalism.[12] The adult common snook that do cannibalize juveniles most likely target them because the juveniles may be the largest of the available prey, so are nutritionally efficient to prey upon.[12]

Common snook, like many species of fish, are very in tune with their environments; even a slight change in their surroundings can have a significant impact on their behavior. For example, common snook are able to determine when to start and stop spawning based on the temperature and salinity of the water they inhabit, the amount of rainfall in the area, and whether or not the moon is full.[13][14] However, in some cases, disturbances in their environment can have very negative effects on the snook population. One example is the devastating results of a cold snap. Snook are very susceptible to cold temperatures, with the effects ranging from the complete halt of all feeding at a water temperature of 14.2 °C (57.6 °F), to the loss of equilibrium at 12.7 °C (54.9 °F), to death at a temperature of 12.5 °C (54.5 °F).[15] Recently, a cold snap in January 2010 resulted in a 41.88% decline in nominal abundance of the common snook population in southwest Florida from the previous year and a 96-97% decrease in apparent survival estimates.[16]

Considered an excellent food fish, the common snook is fished commercially and foreign-caught fish are sold in the US. When cooking snook, the skin must be removed, because it imparts an unpleasant taste, described as soapy, to the fish.[20]

“At the June 2012 Florida Fish and Wildlife Conservation Commission (FWC) meeting, Commissioners voted to keep the recreational harvest of snook in Gulf of Mexico waters closed through Aug. 31, 2013. This closure will offer the species additional protection after a 2010 cold kill detrimentally affected the population. Snook closed to harvest in Gulf of Mexico and Atlantic waters in January 2010 after a severe cold kill affected snook population number.”[23]

All snook are “catch-and-release only” in the Gulf of Mexico until August 31, 2013. At that time, the FWC can choose to open or close snook harvest for another season. The commercial harvest or sale of snook is prohibited by the same regulations.

At the June 2013 FWC meeting, commissioners voted to let the recreational harvest of snook reopen in Gulf of Mexico waters from September 1 that year. The next stock assessment for snook was scheduled for 2015, but has not yet occurred as of June 2016, effectively leaving the fish under a protected status.[24]