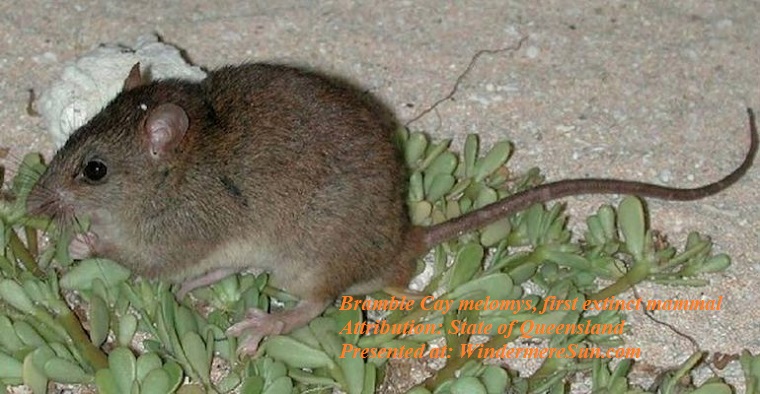 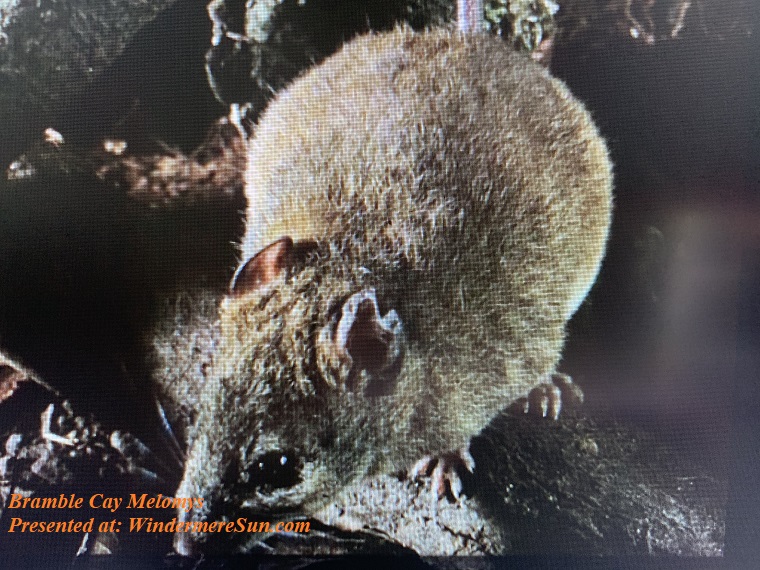 The Bramble Cay melomys (BCm), a small brown rat lived on a small coral island off of northern Australia on the Great Barrier Reef (about 12 acres or 5 hectares), in the Torres Strait, between Queensland state and Papua New Guinea, is the first mammal to have become extinct due to “human-induced climate change”, according to Australian government. BCm had not been seen for almost 10 years and was pronounced extinct in 2016 after exhaustive conservation efforts failed, according to a report published by the University of Queensland. This finding was confirmed on Monday, Feb. 18, 2019, by the Australian government.


According to the University of Queensland 2016 report, the cause of BCm’s extinction was “almost certainly ocean inundation” from rising sea levels over the past decade, leading to “dramatic habitat loss“. Several hundreds of the BCm’s occupied the island in 1970s, but their population declined rapidly after the 1970s. Queensland state government classified the species as endangered in 1992 due to the sharp drop of its population. Critics of Australia’s conservation efforts say the extinction of the melomys highlights the lack of resources for preserving wildlife. Greens Party Senator Janet Rice, chair of a senate inquiry into Australia’s extinction crisis, said, “Bramble Cay melomys’ extinction is an absolute tragedy….Labor and Liberal’s addiction to coal is the death warrant for many of our other threatened animals.”
According to a 2015 study by the University of Connecticut: If the temperature continues to rise, nearly 8% of all species on planet earth could become extinct. Australia, New Zealand, and South America are considered to be at highest risk.

Let’s take a look at the excerpt from wikipedia on the topic of Bramble Cay melomys, in italics, below:

The Bramble Cay melomys, or Bramble Cay mosaic-tailed rat (Melomys rubicola), is an extinct species of rodent in the family Muridae and subfamily Murinae. It was an endemic species of the isolated Bramble Cay, a vegetated coral cay located at the northern tip of the Great Barrier Reef. Described by researchers as having last been seen in 2009 and declared extinct by the Queensland Government and University of Queensland researchers in 2016,  it was formally declared extinct by the International Union for Conservation of Nature (IUCN) in May 2015  and the Australian government in February 2019.[1][4]Considered the only mammal endemic to the Reef, it became the first documented extinction of a mammal species due to climate change.[5][6]

The Bramble Cay melomys is an extinct member of the genus Melomys, which contains approximately 20 species of rodents living in the wet habitats of northern Australia (Far North Queensland), New Guinea, Torres Strait Islands and islands of the Indonesian archipelago.[7][8]

The Bramble Cay melomys occurred only on Bramble Cay, a vegetated coral cay measuring 340 by 150 metres (1,120 by 490 ft) located at the northern tip of the Great Barrier Reef. It was described in 2002 as Australia‘s most isolated mammal.[9][11] The cay is located in the northeastern portion of the Torres Strait, approximately 50 kilometres (31 mi) from the mouth of the Fly River in Papua New Guinea. The cay is between 4 and 5 hectares (9 7⁄8 and 12 3⁄8 acres), but the rodent only occupied the vegetated portion of the island, measuring approximately 2 hectares (5 acres).[9] The vegetation of the island comprises grasses and herbs, generally shorter than 4 metres (13 1⁄8 ft). The Bramble Cay melomys preferred the more densely vegetated areas, and avoided those parts of the island that had high densities of seabirds.[9] The species was observed to feed on Portulaca oleracea as well as on turtle eggs. The breeding season of the species was lengthy, and the sex ratio was skewed towards females.[9]

A 2008 “recovery plan” had understated the risks to its survival.[13] Researchers reported that the last sighting of the species was in 2009; surveys in 2011 failed to find the animal.[12][14] The habitat of the species was generally described as being vulnerable to severe weather and rising sea level, as a result of its low elevation (the island does not rise further than 3 metres (9 3⁄4 ft) above sea level).[9][12]

After a short survey in 2014 found no trace of the species, scientists set out to conduct a thorough search and capture any remaining creatures in order to start a captive breeding program. However, after taking five months to get the necessary permissions, when they arrived in 2015 they could not find a single melomys.[6]

In June 2016, researchers from Queensland’s Department of Environment and Heritage Protection and the University of Queensland jointly reported that the species had indeed become extinct, adding: “Significantly, this probably represents the first recorded mammalian extinction due to anthropogenic climate change“.[2][3] However, writing in Australian Geographic, Lauren Smith stated, “The authors of the report do note that there is a slight chance that there’s an as-yet-unknown population of the species in Papua New Guinea around the Fly River delta area, and that until that area is adequately surveyed, the Bramble Cay melomys should have the tag ‘Possibly Extinct’ added to the IUCN Red listing.”[15]

On 18 February 2019, the Australian Government’s Department of the Environment and Energy formally recognised the extinction of the Bramble Cay melomys, which was confirmed by the IUCN two days later.[16][17][1] The state Government of Queensland report stated that the likely cause of extinction was inundation of the island multiple times during the last decade, leading to habitat loss for the species and possibly also direct mortality.[18] The report also stated: “Significantly, this probably represents the first recorded mammalian extinction due to anthropogenic climate change.”[13] The report said the “root cause” of the extinction was sea-level rise as a consequence of global warming.[6]

Ornithologist John Woinarski of Charles Darwin University said its loss was foreseeable and preventable; it had been known for years that its position was precarious. He believed that its loss is at least partly due to under-funding for conservation programs and the fact that it was not an animal charismatic enough to garner much public attention.[6]