U.S. Involvement In The War In Yemen Will Be Limited Now

Saudi-led airstrike, destroyed house in the south of Sanna'a, 2015 (presented at: WindermereSun.com) 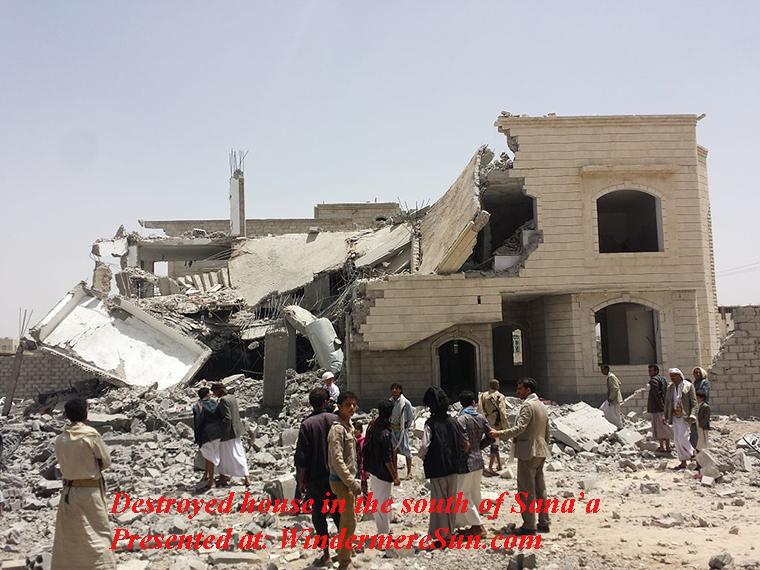 Saudi-led airstrike, destroyed house in the south of Sanna’a, 2015 (presented at: WindermereSun.com)

In our news wrap Wednesday, Feb. 13, 2019, the House rebuked President Trump by voting to limit U.S. involvement in the war in Yemen. The measure would end U.S. military assistance for a Saudi-led bombing campaign against Iranian-backed rebels. Plus, as President Trump seeks to up the pressure on Venezuelan President Nicolas Maduro, the House Foreign Affairs Committee chair criticized Trump’s “saber rattling.” in the video “News Wrap: House votes to limit U.S. involvement in Yemen“, below:

If you are not familiar with the historical background regarding relationship between U.S. , Saudi Arabia, and Yemen, let’s share some of these videos below:

The country of Yemen has been embroiled in fighting for months and the situation is quickly reaching a tipping point. Geographically positioned at an important juncture in the Arab world, Yemen is home to several warring factions, all with different goals. Bloomberg’s David Gura explains the  fighting in Yemen in 2015. (Video by: Amy Marino, Kelly Buzby; Maps by: Steve Jackson), in the video ” The Crisis in Yemen Explained“, below:

The U.S. had been helping Saudi Arabia bomb Yemen and it’s a disaster, the video from 2016, “The US may be aiding war crimes in Yemen“, below: The Senate voted to withdraw U.S. aid from the Saudi-led war in Yemen, despite President Trump’s support for the Kingdom of Saudi Arabia. Zeke Miller, CBSN political contributor and White House reporter for the AP joins CBSN’s “Red & Blue” to discuss the vote, in the video from Dec., 2018, “Senate deals blow to White House, votes to pull U.S. aid from Yemen war“, below: Violence and disease in the Yemeni port city of Hudaida are putting thousands of patients at risk. Aid groups donate thousands of litres of fuel and millions of litres of water every month, but it’s still not enough for one particular hospital. Sarah Balter reports, in a video from about a week ago, “The War in Yemen: Thousands struggle to access healthcare“, below: Lawmakers are demanding answers after CNN’s Nima Elbagir reported that US weapons are falling into enemy hands in Yemen. The top United States military commander in the Middle East suggested that America would continue to back its allies waging war in Yemen, despite new evidence of arms deal violations uncovered by a CNN investigation, in the video about a week ago, “Top general asked about CNN report on US weapons in Yemen“, below:
Gathered, written, and posted by Windermere Sun-Susan Sun Nunamaker
More about the community at www.WindermereSun.com