“Off the Record” App Fights Your Tickets

Off the record app (presented at: WindermereSun.com) 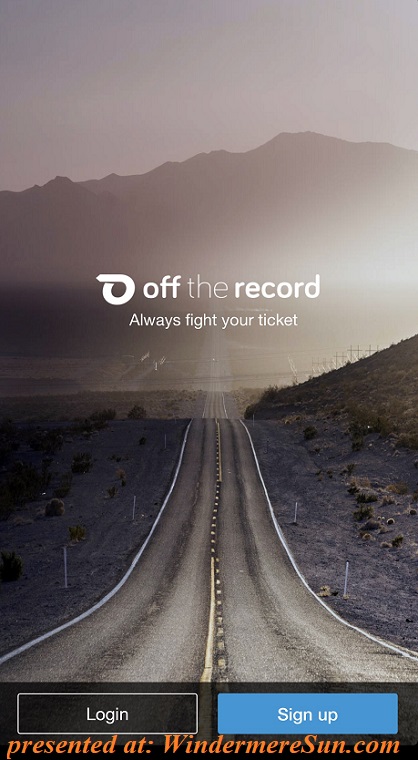 Off the record app (presented at: WindermereSun.com)

Did you know that only 5% of over 200 million drivers in USA would actually fight their traffic tickets due to complexity or lack of time? In October, 2015, 3 Seattle software engineers and entrepreneurs: Alex Guirguis, Chris Guirguis, and Mark Mikhail, had co-founded and launched an app, “Off-The-Record” to take care of this problem. Below, is the video “Seattle entrepreneur’s app helps drivers fight tickets-KOMO News” to show you how it works:

Off the Record had received its first customer within 30 minutes after the launch in iOS App Store. The company was boasting 97% success rate after handling hundreds of tickets within the first year. Clients could provide all the necessary information to contest a ticket in under a minute.

There is no need for an attorney, no mailing the ticket, and no need to show up in court. Users simply provide a photo of their traffic ticket (except parking violations, DUI’s, or criminal traffic violations), answer a few questions such as what court it was assigned to, and then make a secure payment of $250. Off the Record then assigns the case to an attorney from a stable that has an established winning record in a variety of courts where the app is available. Guirguis commented that there are 41 million traffic infractions in USA each year, and 2,300 per day in Washington alone.  “It’s a big market, that no one’s really looked at from a technology standpoint, for various reasons.” Guirguis continued, “People are not familiar with it, lawyers are not big adopters of technology, they’re very resistant to change.”  Guirguis also said that it’s been well documented that up to 25% of tickets are issued erroneously due to imperfect radar technology and cities officer errs and that 95% of people who gets a ticket just pay the fine. Since most of the infractions Off the Record handles involve: lower level speeding, going through a stop sign, improper lane change, these fines are generally around $150. Off the Record does not deal with parking tickets, criminal infractions (such as speeding 100 mph is a 35 mph zone), or DUI’s  because the fine would be much steeper. What Off the Record does is to help consumers to reduce complexity of the law, eliminate time spent in court, and to prevent dramatically increased insurance premiums.

Guirguis said Off the Record is changing the legal industry. “We’re big on transparency and we want to add transparency to the whole legal field. There is none right now. There is no way for you to go and hire an attorney knowing that the attorney you’re hiring is the most recommended. All their web sites are going to tell you is, ‘I’m the best.’ That’s not how the world works any more. The world is very data driven. Uber, data driven. Amazon, data driven. And there’s no reason that the legal field can’t be data driven too.” Off the Record collects reviews internally for every case that’s been handled and once they make that public, users will know that every review that they read has been left by some one who had a ticket fought by that attorney.
Gthered, written, and posted by Windermere Sun-Susan Sun Nunamaker
More about the community at www.WindermereSun.comAny comments, suggestions, concerns regarding this post will be welcomed at [email protected]

The client gets their money back if “Off-The Record” attorney cannot get the ticket dismissed, reduced or deferred. However, there are some limits to “Off-The-Record” service: it does not take care of DUI’s, criminal traffic violations, or parking tickets.
Share