Thich Nhat Hanh, The Father of Mindfulness, Awaits His Liberation

Thich Nhat Hanh, at his Plum Village monastery in France, introduced ways to meditate that any one could master (Attribution: Plum Village Community of Engaged Buddhism, Presented at: WindermereSun.com) 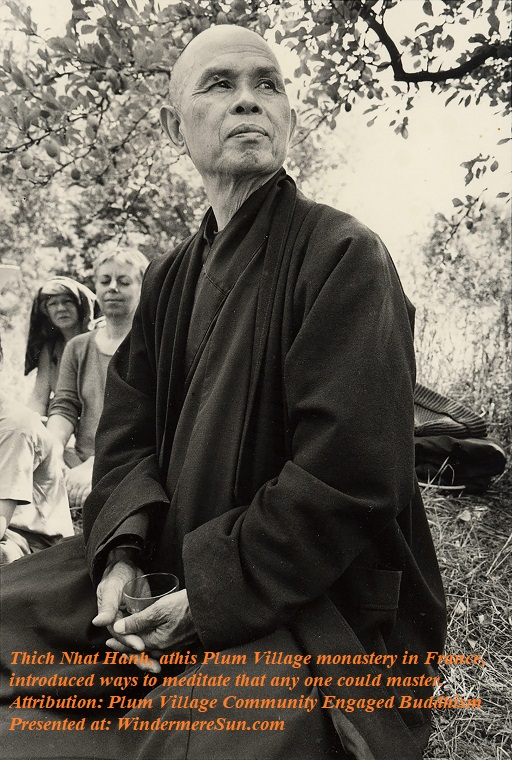 Thich Nhat Hanh, at his Plum Village monastery in France, introduced ways to meditate that any one could master (Attribution: Plum Village Community of Engaged Buddhism, Presented at: WindermereSun.com)

Outside Vietnam’s former capital, Hue, in a Buddhist temple, the 92 year old Thich Nhat Hanh is refusing medication prescribed for him after a stroke in 2014.  He has come to quietly “transition” (as indicated by his disciples), lying in a villa in the grounds of the 19th century Tu Hieu Pagoda, awaiting for liberation from the cyclical nature of existence. He is hailed by Presidents and Oprah Winfrey alike, as “one of the most influential spiritual leaders of our times.”  He is born a Nguyen Xuan Bao,  a Vietnamese Buddhist monk and peace activist, founder of the Plum Village Tradition. He spent most of his later life residing in the Plum Village Monastery in southwest France, travelling internationally to give retreats and talks. He coined the term “Engaged Buddhism” in his book Vietnam: Lotus in a Sea of Fire. After a long term of exile, he was given permission to make his first return trip to Vietnam in 2005. In November 2018, he returned to Vietnam to spend his remaining days at his “root temple,” Từ Hiếu Temple near Huế. He was banished in the 1960s because the South Vietnamese government deemed him traitorous for his refusal to condone the war on communism. He is now back in the temple where he took his vows at age 16, after 40 years of exile. Framed above his bed, are the words tro ve, “returning”, in his own brushstroke.

Thich Nhat Hanh is considered as the father of mindfulness in the West. He taught that we could all be bodhisattvas by finding happiness in simple things, such as mindfully peeling an orange or sipping tea. He wrote in Your True Home, one of more than 70 books he wrote, that “A Buddha is some one who is enlightened, capable of loving and forgiving….You know that at times you’re like that. So enjoy being a Buddha.”


To better understand the teachings of Thich Nhat Hanh, please refer to the excerpt from Wikipedia, in italics, below:

Thích Nhất Hạnh’s approach has been to combine a variety of teachings of Early Buddhism, Mahayana Buddhist traditions of Yogācāra and Zen, and ideas from Western psychology to teach Mindfulness of Breathing and the Four Establishments of Mindfulness, offering a modern light on meditation practice. Hạnh’s presentation of the Prajnaparamita in terms of “interbeing” has doctrinal antecedents in the Huayan school of thought,[49] which “is often said to provide a philosophical foundation” for Zen.[50]

Nhất Hạnh has also been a leader in the Engaged Buddhism movement[1] (he is credited with coining the term[51]), promoting the individual’s active role in creating change. He cites the 13th-century Vietnamese king Trần Nhân Tông with the origination of the concept. Trần Nhân Tông abdicated his throne to become a monk and founded the Vietnamese Buddhist school of the Bamboo Forest tradition.[52]

Nhất Hạnh is now recognized as a dharmacharya (teacher), and as the spiritual head of the Từ Hiếu Pagoda and associated monasteries.[12][16] On May 1, 1966 at Từ Hiếu Temple, he received the “lamp transmission”, making him a dharmacharya, from Zen Master Chân Thật.[12]

In 1961 Nhất Hạnh went to the US to teach comparative religion at Princeton University,[17] and was subsequently appointed lecturer in Buddhism at Columbia University.[17] By then he had gained fluency in French, Chinese, Sanskrit, Pali, Japanese and English, in addition to his native Vietnamese. In 1963, he returned to Vietnam to aid his fellow monks in their non-violent peace efforts.[17]

Nhất Hạnh taught Buddhist psychology and prajnaparamita literature at Vạn Hanh Buddhist University, a private institution that taught Buddhist studies, Vietnamese culture, and languages.[17] At a meeting in April 1965, Vạn Hanh Union students issued a Call for Peace statement. It declared: “It is time for North and South Vietnam to find a way to stop the war and help all Vietnamese people live peacefully and with mutual respect.” Nhất Hạnh left for the U.S. shortly afterwards, leaving Chân Không in charge of the SYSS. Vạn Hạnh University was taken over by one of the Chancellors who wished to sever ties with Thich Nhất Hạnh and the SYSS, accusing Chân Không of being a communist. From that point the SYSS struggled to raise funds and faced attacks on its members. The SYSS persisted in their relief efforts without taking sides in the conflict.[5]

Nhất Hạnh returned to the US in 1966 to lead a symposium in Vietnamese Buddhism at Cornell University, and to continue his work for peace. While in the US, Nhất Hạnh stopped at Gethsemani Abbey to speak with Thomas Merton.[18] When Vietnam threatened to block Nhất Hạnh’s re-entry to the country, Merton penned an essay of solidarity entitled “Nhat Hanh is my Brother”.[18][19] He had written a letter to Martin Luther King, Jr. in 1965 entitled: “In Search of the Enemy of Man”. It was during his 1966 stay in the US that Nhất Hạnh met with King and urged him to publicly denounce the Vietnam War.[20] In 1967, Dr. King gave a famous speech at the Riverside Church in New York City, his first to publicly question the U.S. involvement in Vietnam.[21] Later that year, Dr. King nominated Nhất Hạnh for the 1967 Nobel Peace Prize. In his nomination Dr. King said, “I do not personally know of anyone more worthy of [this prize] than this gentle monk from Vietnam. His ideas for peace, if applied, would build a monument to ecumenism, to world brotherhood, to humanity”.[22] The fact that King had revealed the candidate he had chosen to nominate and had made a “strong request” to the prize committee, was in sharp violation of the Nobel traditions and protocol.[23][24] The committee did not make an award that year.

Nhất Hạnh moved to France and became the chair of the Vietnamese Buddhist Peace Delegation.[17] When the Northern Vietnamese army took control of the south in 1975, he was denied permission to return to Vietnam.[17] From 1976–1977 he led efforts to help rescue Vietnamese boat people in the Gulf of Siam,[25] eventually stopping under pressure from the governments of Thailand and Singapore.[26]

A CIA document from the Vietnam War has called Thích Nhất Hạnh a “brain truster” of Thich Tri Quang, the leader of a dissident group.[27]

Nhất Hạnh created the Order of Interbeing (Vietnamese: Tiếp Hiện) in 1966. He heads this monastic and lay group, teaching Five Mindfulness Trainings. 2018-12-28 https://plumvillage.org/mindfulness-practice/the-5-mindfulness-trainings/. Retrieved 2018-12-28. Missing or empty |title= (help) and the Fourteen Mindfulness Trainings[28]. In 1969 he established the Unified Buddhist Church (Église Bouddhique Unifiée) in France (not a part of the Unified Buddhist Church of Vietnam). In 1975 he formed the Sweet Potato Meditation Center. The center grew and in 1982 he and his colleague Chân Không founded Plum Village Monastery, a vihara[A] in the Dordogne in the south of France.[4] The Plum Village Community of Engaged Buddhism [29] (formerly the Unified Buddhist Church) and its sister organization in France the Congregation Bouddhique Zen Village des Pruniers are the legally recognized governing bodies for Plum Village in France, for Blue Cliff Monastery in Pine Bush, New York, the Community of Mindful Living, Parallax Press, Deer Park Monastery in California, Magnolia Grove Monastery in Batesville, Mississippi, and the European Institute of Applied Buddhism in Waldbröl, Germany.[30][31] According the Thích Nhất Hạnh Foundation, the charitable organization that serves as the fundraising arm of the Plum Village Community of Engaged Buddhism the monastic order established Thich Nhat Hanh comprises 589 monastics in 9 monasteries world-wide. [32]

He established two monasteries in Vietnam, at the original Từ Hiếu Temple near Huế and at Prajna Temple in the central highlands. Thích Nhất Hạnh and the Order of Interbeing have established monasteries and Dharma centers in the United States at Deer Park Monastery (Tu Viện Lộc Uyển) in Escondido, California, Maple Forest Monastery (Tu Viện Rừng Phong) and Green Mountain Dharma Center (Ðạo Tràng Thanh Sơn) in Vermont and Magnolia Grove Monastery (Đạo Tràng Mộc Lan) in Mississippi, the second of which closed in 2007 and moved to the Blue Cliff Monastery in Pine Bush, New York . These monasteries are open to the public during much of the year and provide ongoing retreats for laypersons. The Order of Interbeing also holds retreats for specific groups of lay people, such as families, teenagers, veterans, the entertainment industry, members of Congress, law enforcement officers and people of color.[33][33][34][35][36] Nhất Hạnh conducted a peace walk in Los Angeles in 2005, and again in 2007.[37]