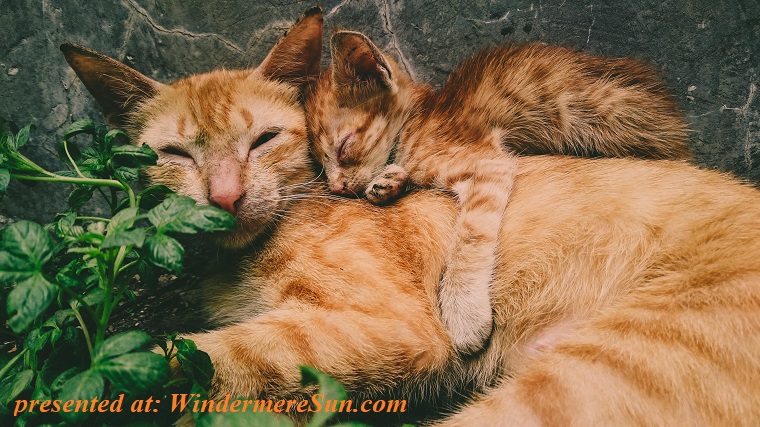 How cuddly (presented at: WindermereSun.com) 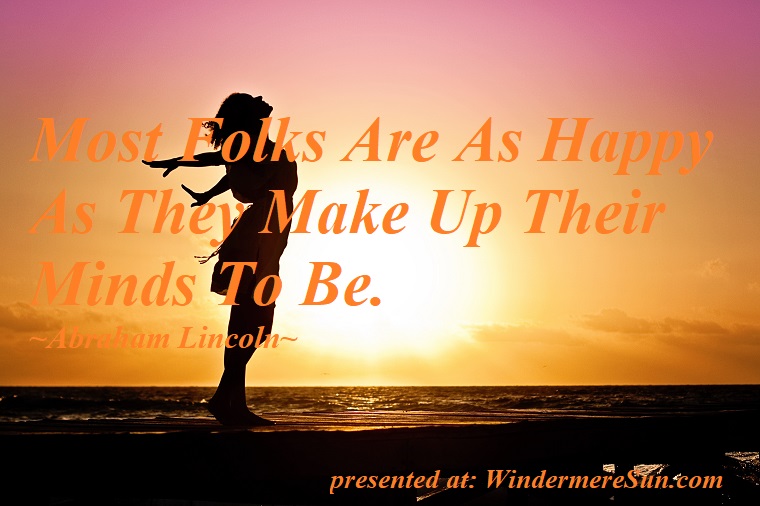 Quote of 1/26/2019, “Most folks are as happy as they make up their minds to be” (quote of Abraham Lincoln, presented at: WindermereSun.com)

How cuddly (presented at: WindermereSun.com)

How cozy and cuddly!

Quote of 1/26/2019, “Most folks are as happy as they make up their minds to be” (quote of Abraham Lincoln, presented at: WindermereSun.com)

Abraham Lincoln once said, “Most folks are as happy as they make up their minds to be.”

To learn more about Abraham Lincoln, please refer to the excerpt from wikipedia, in italics, below:

Abraham Lincoln (February 12, 1809 – April 15, 1865) was an American lawyer and politician who served as the 16th president of the United States from 1861 until his assassination in April 1865. Lincoln led the nation through the Civil War, its bloodiest war and its greatest moral, constitutional, and political crisis.[1][2] In doing so, he preserved the Union, abolished slavery, strengthened the federal government, and modernized the economy.

Born in Kentucky, Lincoln grew up on the western frontier in a poor family. Self-educated, he became a lawyer in Illinois. As a Whig Party leader, he served eight years in the state legislature and two in Congress, then resumed his law practice. Angered by the success of Democrats in opening the western prairie lands to slavery, he reentered politics in 1854. He was a leader in building in the West the new Republican Party from Whigs and anti-slavery Democrats. He gained national attention in 1858 debating a top national Democratic leader Stephen A. Douglas. Although he lost that race, he became the western candidate for the 1860 presidential nomination as a moderate from a swing state. He swept the North and was elected president in 1860. Southern pro-slavery elements took his win as proof that the North was rejecting the Constitutional rights of Southern states to promote slavery. They began the process of seceding from the union and forming a new country. But nationalism was a powerful force in the North, which refused to tolerate secession. When the new Confederate States of America fired on Fort Sumter, one of the few U.S. forts left in the South, Lincoln called up volunteers and militia to suppress the rebellion and restore the Union. As the leader of the moderate faction of the Republican Party, Lincoln confronted Radical Republicans, who demanded harsher treatment of the South; War Democrats, who rallied a large faction of former opponents into his camp; anti-war Democrats (called Copperheads), who despised him; and irreconcilable secessionists, who plotted his assassination.

Lincoln fought back by pitting his opponents against each other, by carefully distributed political patronage and by appealing to the American people with his powers of oratory.[3] His Gettysburg Address became an iconic endorsement of nationalism, republicanism, equal rights, liberty, and democracy. He suspended habeas corpus, and he averted British intervention by defusing the Trent Affair. Lincoln closely supervised the war effort, especially the selection of generals, including his most successful general, Ulysses S. Grant. He made major decisions on Union war strategy, including a naval blockade that shut down the South’s trade. As the war progressed, his complex moves toward ending slavery included the Emancipation Proclamation of 1863; Lincoln used the U.S. Army to protect escaped slaves, encouraged the border states to outlaw slavery, and pushed through Congress the Thirteenth Amendment to the United States Constitution, which permanently outlawed slavery.

An astute politician, knowledgeable concerning factional feuds in each state, Lincoln reached out to the War Democrats and managed his own re-election campaign in the 1864 presidential election. Anticipating the war’s conclusion, Lincoln pushed a moderate view of Reconstruction, seeking to reunite the nation speedily through a policy of generous reconciliation in the face of lingering and bitter divisiveness. A few days after victory was complete he was assassinated, and ever since Lincoln has been remembered as the martyr hero of the reunited nation. Lincoln has been consistently ranked both by scholars[4] and the public[5] as among the greatest U.S. presidents.