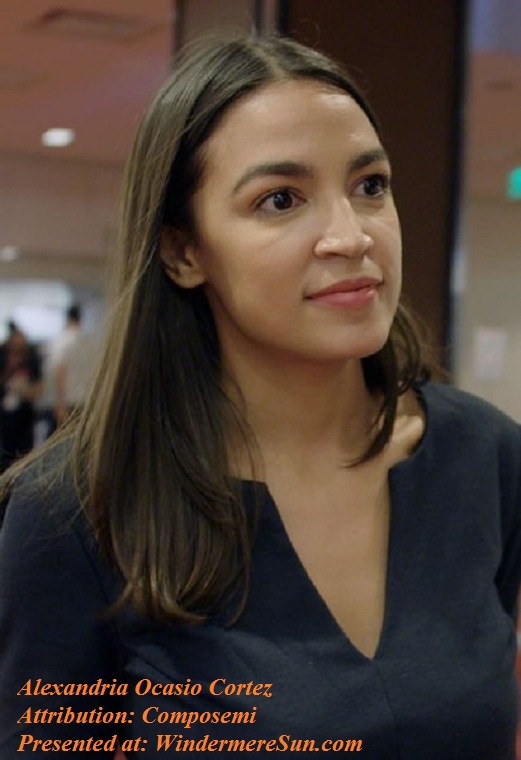 Taxing the rich is a fairly popular talking point for progressives. But we have to remember it’s not as simple as some people try to make it, in the video “Sam Seaborn on Taxing the Rich“, below:


A rising star in the U.S. political arena,  an American politician, activist, and community organizer, Alexandria Ocasio-Cortez, is bringing the moral courage and enthusiastic energy needed in American politics. A member of the Democratic Party, she has been the U.S. Representative for New York’s 14th congressional district since January 3, 2019. At age 29, she is the youngest woman to serve in Congress in the history of the United States.

Ocasio-Cortez was the first person since 2004 to challenge the Democratic Caucus Chair, Joe Crowley, in the Democratic primary. She faced a significant financial disadvantage, but said, “You can’t really beat big money with more money. You have to beat them with a totally different game.” Nearly 75% of her donations were small individual contributions, while less than one percent of Crowley’s contributions were.[27] The Ocasio-Cortez campaign spent $194,000 to the Crowley campaign’s $3.4 million.[40]

Ocasio-Cortez had not previously held elected office,[13] and her campaign video began with her saying “Women like me aren’t supposed to run for office.”[41]

Ocasio-Cortez is a self-described democratic socialist.[106] She is a member of the Democratic Socialists of America.[10] She supports progressive policies such as Medicare for All, a job guarantee,[107]tuition-free public college, ending the privatization of prisons, and enacting gun-control policies.[108]

I am all in favor of green deals, Medicare for all,  and would be supportive of measures to eliminate national debt problem, but keep in mind that the above estimates are not including the consideration of potential exodus of the wealthy from country with heavy taxes. For example, in 2016 alone, some 12,000 millionaires emigrated from France (highest outflow in the world) due to the French wealth tax currently applying to personal assets over 1.3 million euros. Therefore, it would be difficult to expect continued tax revenues from these people. It might be a good idea to experiment on a small segment of the population to find out what type of result government or country would end up getting before implementing these measures. It would be good to determine the optimal tax rate, rate at which would maximize government’s revenue without losing its most productive segment of the population. Historically, 37% has been cited in many researches as the optimal tax rate. But it is possible that people may be willing to pay a bit more these days to help to solve the national debt problem. Again, I reiterate, we need to experiment and research before implementing actual rate or measures.

Watch CNBC’s Editor-at-Large, John Harwood, join Ali Velshi to dig into a new tax proposal from New York’s Alexandria Ocasio-Cortez and look at the biggest criticisms of it, in the video “Why Rep. Ocasio-Cortez’s Tax Plan Might Not Work, Velshi & Ruhle, MSNBC“, below:

Furthermore, according to Professor Anthony Davies in the video below, if considering not only the tax people pay to the federal government  but also what they get from the federal government, the actual net payers of taxes are from only the top 40% of the American population. Detailed explanations, below, in the video “10 Myths About Government Debt“:


Professor Anthony Davies suggests the ways to stop the bleeding and prevents the national debt problem getting worse, reaching a balanced federal budget in 5 years by:

According to a Bloomberg report based on 2016 tax returns, the top 1% of the tax payers are already paying greater share of the income taxes, 37.3%, than the bottom 90%, in the video “Ocasio-Cortez suggests 60 to 70 percent tax rate for the rich to pay for a ‘Green New Deal’“, below:

Congresswoman Ocasio-Cortez, we love your energy and enthusiasm for renewable energy, Medicare for all,  and the future ! But please be sure to test on a small segment of the population to find the actual optimal tax rate and possible ways to cut spendings  before implementing any of your measures.