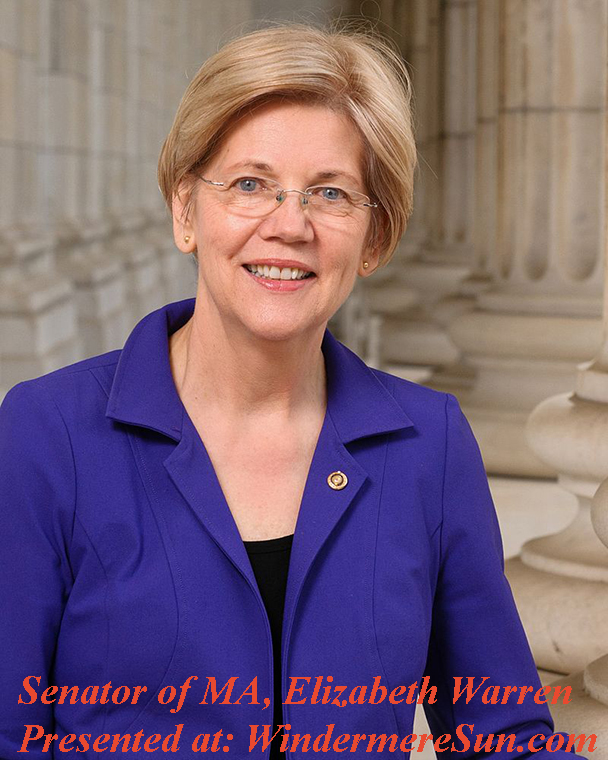 For more on Elizabeth Warren, please refer to the excerpt from Wikipedia, in italics, below:

Elizabeth Ann Warren (née Herring, born June 22, 1949) is an American politician and academic serving as the senior United States Senator from Massachusetts since 2013. Warren was formerly a prominent scholar specializing in bankruptcy law.

Warren’s initial foray into public policy began with opposing what eventually became a 2005 act restricting bankruptcy access for individuals. Warren saw her profile rise in the late 2000s for her forceful stances in favor of more stringent regulations following the 2007–2008 financial crisis. She served as chair of the Congressional Oversight Panel of the Troubled Asset Relief Program and was instrumental in the creation of the Consumer Financial Protection Bureau (CFPB), for which she served as the first Special Advisor.

Unable to surmount Republican opposition to become the Director the CFPB, Warren instead challenged and defeated Republican incumbent Senator Scott Brown of Massachusetts in 2012. She was the keynote speaker of the 2016 Democratic National Convention and became Vice Chair of the Senate Democratic Caucus the following year. A noted progressive leader, Warren has focused on consumer protection, economic opportunity, and the social safety net while in the Senate. Following her reelection to the Senate in 2018, Warren announced the formation of an exploratory committee for her campaign in the 2020 presidential election.