China’s Chang’e-4 Lunar Probe, First To Land on the Dark Side of the Moon 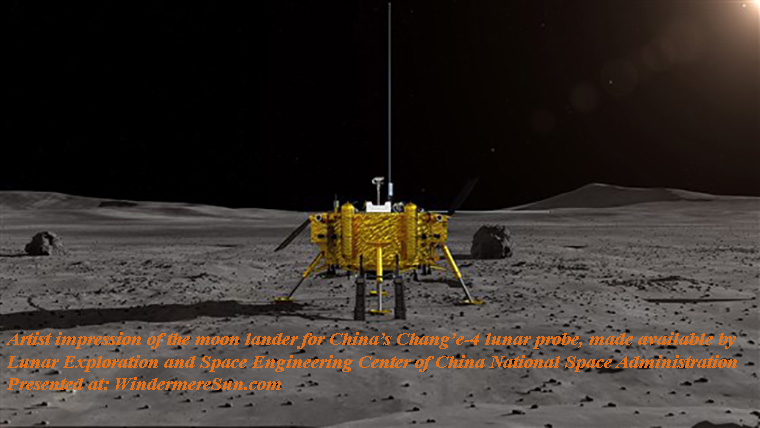 Photo of an artist impression of the moon lander for China’s Chang’e-4 lunar probe, made available by Lunar Exploration and Space Engineering Center of of China National Space Administration (presented at: WindermereSun.com) 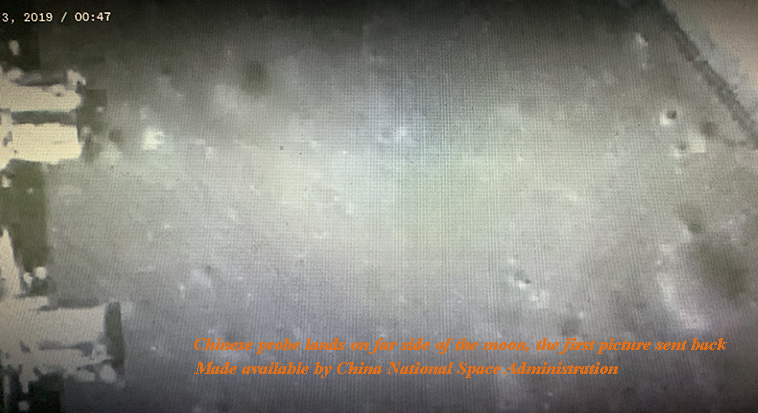 For the first time in history, there is a rover on the far side of the moon and the Chang’e 4 mission is just beginning to explore this hidden side, in the video “Why Did China Send a Probe to the Far Side of the Moon?“, below:

A Chinese spacecraft has made the first successful landing ever on the far side of the moon the Chang’e-4 probe, named after the Chinese goddess of the Moon, made what Chinese officials described as a soft landing early this morning. The unmanned capsule is carrying seeds for an experiment in cultivating vegetables and is equipped with a rover and measuring devices. Not to be outdone by China, the US space agency NASA released the first detailed images its New Horizons probe sent of the space rock ‘Ultima Thule.’ The frozen rock at the edge of our solar system is the most distant object ever explored by humankind, in the video “China’s Chang’e-4 lands on moon as NASA releases Ultima Thulepics, DW News“, below:
Chang’e-4 is the next step in China’s lunar exploration mission and has achieved the first ever soft-landing on the far side of the moon. The mission is a breakthrough in China’s ability to explore outer space, in the video “Chang’e-4: A milestone in China’s space ambitions“, below: New images of the far side of the Moon captured by the landing camera on China’s Chang’e-4 lunar probe have been released on Thursday, as the probe made a successful touchdown on the lunar surface, in the video “Chang’e-4 cameras record first images of far side of the moon“, below: China has been developing their space program for almost as long the US starting in 1958 but it’s only quite recently that it has caught up with the west and is poised to be a leader in space in the next decade or so. In this video, we look at how China is taking on the world in space, in the video “How China is taking on the world in space“, below:
The name Chang’e comes from a Chinese goddess who has lived on the moon for millennia, according to legend. For better understanding of the Chinese Lunar Exploration Program, please refer to the excerpt from wikipedia, in italics, below:

Ouyang Ziyuan, a geologist and chemical cosmologist, was among the first to advocate the exploitation not only of known lunar reserves of metals such as titanium, but also of helium-3, an ideal fuel for future nuclear fusion power plants. He currently serves as the chief scientist of the Chinese Lunar Exploration Program. Another scientist, Sun Jiadong, was assigned as the general designer, while scientist Sun Zezhou was assigned as the deputy general designer. The leading program manager is Luan Enjie.

As indicated by the official insignia, the shape of a calligraphic nascent lunar crescent with two human footprints at its center reminiscent of the Chinese character 月 for ″moon″, the ultimate objective of the program is to pave the way for a manned mission to the Moon. Such a mission may occur in 2025–2030.[8]

The Chinese Lunar Exploration Program is divided into three main operational phases, with each mission serving as a technology demonstrator in preparation for future missions.

The Chang’e 5-T1 test vehicle service module took this photo of Earth and the Moon together on November 9, 2014, the service module carrying the camera in 540,000 km from Earth, at a distance of 920,000 kilometers moon shot clear of the Earth-Moon photo images. a week after successfully returning the sample capsule. The Moon’s surface is quite dark compared to Earth’s bright clouds.

The first phase entailed the launch of two lunar orbiters, and is now effectively complete.

The second phase is ongoing, and incorporates spacecraft capable of soft-landing on the Moon and deploying lunar rovers.

The final phase will entail a lunar sample return mission.