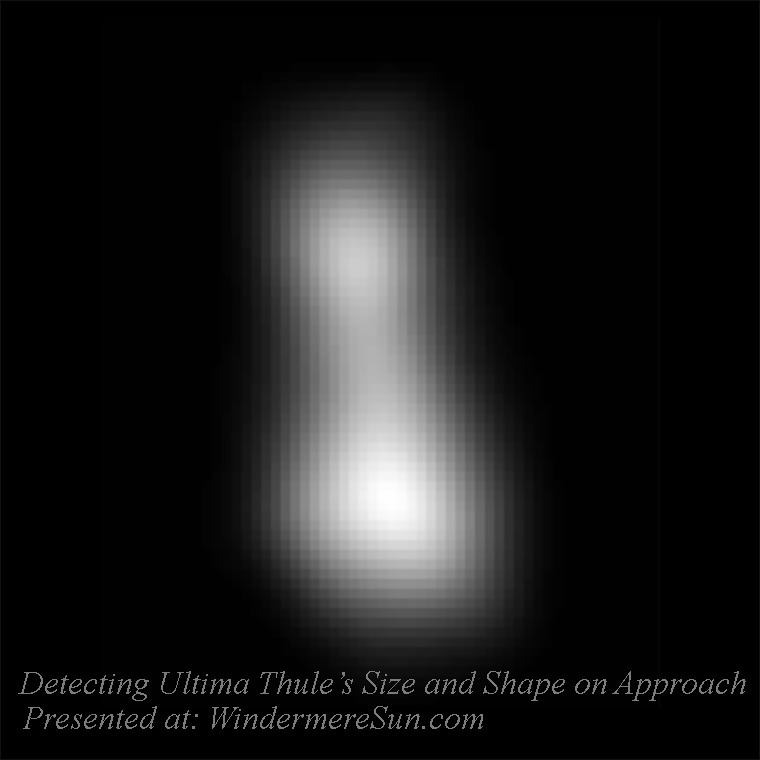 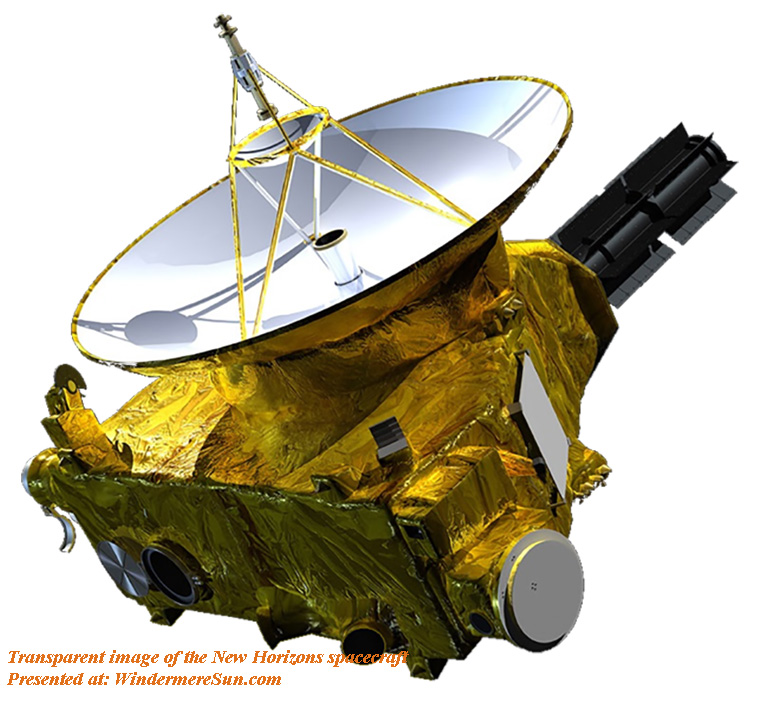 A Transparent image of New Horizons spacecraft (presented at: WindermereSun.com)

What a great way to bring in the new yearl! The on-going NASA New Horizons mission, which on New Years Day, 2019, has achieved the most distant spacecraft flyby in history!

On this New Year’s Day, NASA has a special reason to celebrate: Its spacecraft New Horizons has made a successful flyby of Ultima Thule, an object orbiting in space about four billion miles from Earth. Science correspondent Miles O’Brien joins Jeffrey Brown to explain the immense difficulty of this mission and its larger significance for the U.S. space program, in the video “Why the latest New Horizons flyby represents a space exploration milestone“, below:

Below, is the excerpt from wikipedia, in italics, on the topic of Ultima Thule:

(486958) 2014 MU69, nicknamed Ultima Thule, is a trans-Neptunian object located in the Kuiper belt. It is a contact binary with an estimated diameter of 30 km (20 mi). With an orbital period of 295 years and a low inclination and eccentricity, it is classified as a classical Kuiper belt object and suspected to have not undergone significant perturbations and to be only moderately cratered. It seems to have a binary-like shape as seen during a stellar occultation, yet has a very flat light curve more consistent with a spherical body. 2014 MU69 was discovered on 26 June 2014 by astronomers using the Hubble Space Telescope as part of a search for a Kuiper belt object for the New Horizons mission to target in its first extended mission; it was chosen over two other candidates to become the primary target of the mission. Its nickname, a Latin metaphor for a place located beyond the borders of the known world, was chosen as part of a public competition in 2018. The New Horizons team plans to submit a proper name to the International Astronomical Union after the spacecraft’s flyby on 1 January 2019, when the nature of the object is better known. It is the farthest object in the Solar System visited by a spacecraft.

An official name for the object, consistent with the naming guidelines of the International Astronomical Union, will be selected by the New Horizons team after the spacecraft’s flyby in January 2019, when the properties of (486958) 2014 MU69 are known well enough to choose a suitable name.[15][16] In the interim, NASA invited suggestions from the public on a nickname to be used.[16] The campaign involved 115,000 participants from around the world, who suggested some 34,000 names. Of those, 37 reached the ballot for voting and were evaluated for popularity–this included eight names suggested by the New Horizons team and 29 suggested by the public. “Ultima Thule” (/ˈθjuːliː/ THEW-lee [US THOO-lee or TOO-lee]),[17][18] which was selected on 13 March 2018,[4] was nominated by about 40 members of the public and was one of the highest vote-getters among the nominees.[4] It is named after the Latin phrase ultima Thule (literally farthermost Thule), an expression referencing the most distant place beyond the borders of the known world.[4]

In 2014, 2014 MU69 was estimated to have a diameter of 30–45 km (20–30 mi) based on its brightness and distance.[6]Observations in 2017 concluded that 2014 MU69 is no more than 30 km (20 mi) long and very elongated, possibly a close or contact binary.[19] The distance between the center of 2014 MU69‘s observed lobes is about 16 kilometres (9.9 mi).[20][21] Based on models from the New HorizonsPluto flyby, it has been predicted that 2014 MU69 is only moderately cratered, with no more than 25 to 50 craters larger than the effective resolution limit of 200 metres (660 ft). Unlike in the inner Solar System, where collisions typically occur at velocities above 10 km per second, it is expected that most craters on 2014 MU69 were formed at much lower speeds. Their morphology may differ from that seen on previously visited asteroids. If the cratering rate is low then most of the surface is expected to be pristine, possibly showing signs of the original accretion, 4.6 billion years ago.[22] 2014 MU69 has a red spectrum, and is the smallest Kuiper belt object to have its colors measured.[23]

2014 MU69‘s orbital period around the Sun is slightly more than 295 years and it has a low inclination and low eccentricity compared to other objects in the Kuiper belt.[24]These orbital properties mean that it is a cold classical Kuiper belt object which is unlikely to have undergone significant perturbations.[6] Observations in May and July 2015 as well as in July and October 2016 greatly reduced the uncertainties in the orbit.[10][3] Results from Hubble Space Telescope observations[25] show that the brightness of 2014 MU69 varies by less than 20 percent as it rotates.[9] This placed significant constraints on the axis ratio of 2014 MU69 to <1.14, having assumed an equatorial view. Despite 2014 MU69‘s irregular shape, there is no detectable light curve amplitude, as its axis is oriented on its side, pointing towards the Sun.[1][26] Distant satellites of 2014 MU69 have been excluded to a depth of >29th magnitude.[27]
New Horizons is the first mission to the Kuiper Belt, a gigantic zone of icy bodies and mysterious small objects orbiting beyond Neptune. This region also is known as the “third” zone of our solar system, beyond the inner rocky planets and outer gas giants. Johns Hopkins University Applied Physics Laboratory (APL) in Maryland, designed, built and operates the New Horizons spacecraft, and manages the mission for NASA’s Science Mission Directorate in Washington. The Year of Pluto – NASA New Horizons is a one hour documentary which takes on the hard science and gives us answers to how the mission came about and why it matters. Interviews with Dr. James Green, John Spencer, Fran Bagenal, Mark Showalter and others share how New Horizons will answer many questions. New Horizons is part of the New Frontiers Program, managed by NASA’s Marshall Space Flight Center in Huntsville, Alabama. The video, “The Year of Pluto-New Horizons Documentary Brings Humanity Closer To The Edge of the Solar System“, below: