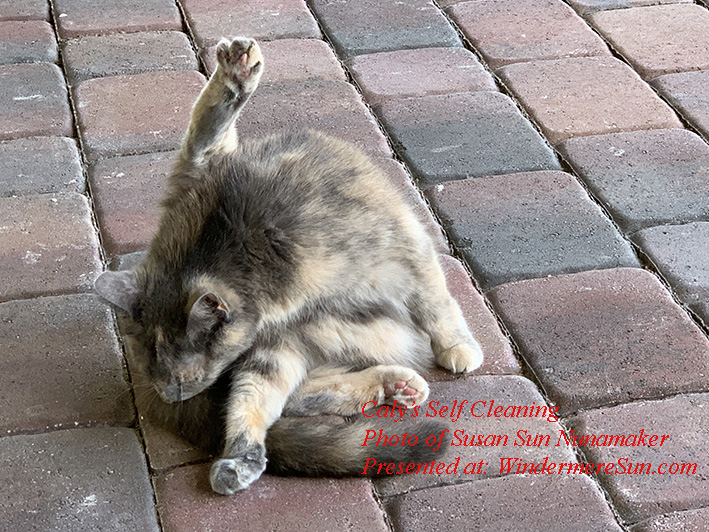 Pet of 12/29/2018, Caly’s Self Cleaning (photo of Susan Sun Nunamaker, presented at: WindermereSun.com) 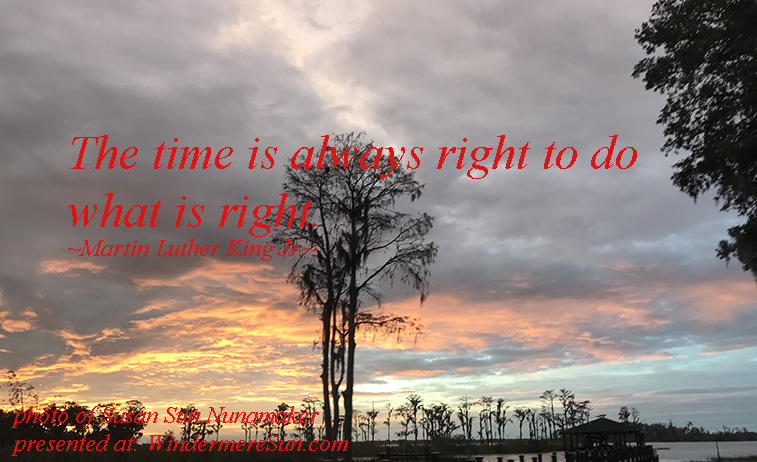 Quote of 12/29/2018, “The time is always right to do what is right.” (quote of Martin Luther King Jr., photo of Susan Sun Nunamaker, presented at: WindermereSun.com)

Pet of 12/29/2018, Caly’s Self Cleaning (photo of Susan Sun Nunamaker, presented at: WindermereSun.com)

Cats love to clean themselves, don’t they?! Look at the way she cleans herself…..

Quote of 12/29/2018, “The time is always right to do what is right.” (quote of Martin Luther King Jr., photo of Susan Sun Nunamaker, presented at: WindermereSun.com)

Martin Luther King Jr. once commented, “The time is always right to do what is right.”

Martin Luther King Jr. (January 15, 1929 – April 4, 1968) was an American Baptist minister and activist who became the most visible spokesperson and leader in the civil rights movement from 1954 until his death in 1968. Born in Atlanta, King is best known for advancing civil rights through nonviolence and civil disobedience, tactics his Christian beliefs and the nonviolent activism of Mahatma Gandhi helped inspire.

King led the 1955 Montgomery bus boycott and in 1957 became the first president of the Southern Christian Leadership Conference (SCLC). With the SCLC, he led an unsuccessful 1962 struggle against segregationin Albany, Georgia, and helped organize the nonviolent 1963 protests in Birmingham, Alabama. He also helped organize the 1963 March on Washington, where he delivered his famous “I Have a Dream” speech.

On October 14, 1964, King won the Nobel Peace Prize for combating racial inequality through nonviolent resistance.[1] In 1965, he helped organize the Selma to Montgomery marches. The following year, he and the SCLC took the movement north to Chicago to work on segregated housing. In his final years, he expanded his focus to include opposition towards poverty and the Vietnam War. He alienated many of his liberal allies with a 1967 speech titled “Beyond Vietnam“. J. Edgar Hoover considered him a radical and made him an object of the FBI’s COINTELPRO from 1963 on. FBI agents investigated him for possible communist ties, recorded his extramarital liaisons and reported on them to government officials, and on one occasion mailed King a threatening anonymous letter, which he interpreted as an attempt to make him commit suicide.