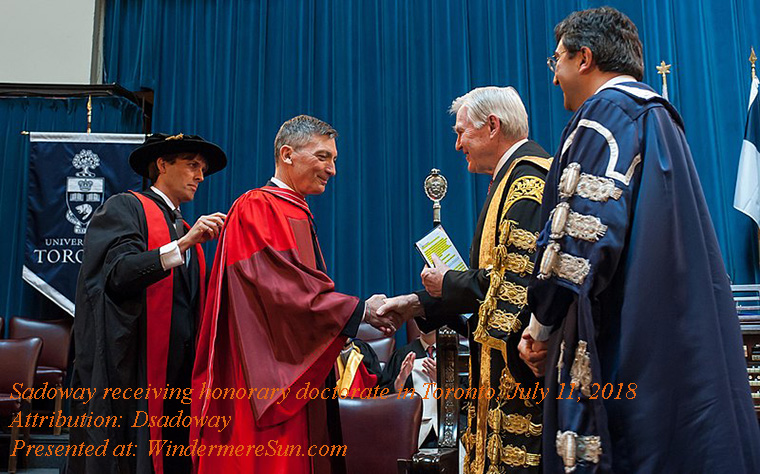 As the need of power and need to transition into renewables accelerate, the issue of storage remains the gate keeper to our 100% renewable future. A faculty member of Materials Chemistry at the Massachusetts Institute of Technology, Donald Robert Sadoway, is a noted expert on batteries and has done significant research on how to improve the performance and longevity of portable power sources. He is also an expert on the extraction of metals from their ores and the inventor of molten oxide electrolysis, which has the potential to produce crude steel without the use of carbon reductant thereby totally eliminating greenhouse gas in steel production. Professor Sadoway’s liquid metal battery holds the promise of being the potential key to unlock the door to the path into 100% renewable energy.

Excerpt from wikipedia, on the research of Donald Robert Sadoway, in italics, below:

As a researcher, Sadoway has focused on environmental ways to extract metals from their ores, as well as producing more efficient batteries.[5] His research has often been driven by the desire to reduce greenhouse gas emissions while improving quality and lowering costs.[3] He is the co-inventor of a solid polymer electrolyte. This material, used in his “sLimcell” has the capability of allowing batteries to offer twice as much power per kilogram as is possible in current lithium ion batteries.[8]

In August 2006, a team that he led demonstrated the feasibility of extracting iron from its ore through molten oxide electrolysis. When powered exclusively by renewable electricity, this technique has the potential to eliminate the carbon dioxide emissions that are generated through traditional methods.[9]

In 2009, Sadoway disclosed the liquid metal battery comprising liquid layers of magnesium and antimony separated by a layer of molten salt[10] that could be used for stationary energy storage.[11] Research on this concept was being funded by ARPA-E[12] and the French energy company Total S.A. [13]Experimental data showed a 69% DC-to-DC storage efficiency with good storage capacity and relatively low leakage current (self discharge).[14] In 2010, with funding from Bill Gates[15] and Total S.A., Sadoway and two others, David Bradwell and Luis Ortiz,[13] co-founded a company called the Liquid Metal Battery Corporation (now Ambri) in order to scale up and commercialize the technology.[13][16]

On February 29, 2012, Sadoway gave a TED talk on his invention of the liquid metal battery for grid-scale storage. The talk is as much about the inventive process as it is about the technology.[21]

Sadoway was named one of Time magazine’s “100 Most Influential People in the World” in 2012 for accomplishments in energy storage as well as his approach to mentoring students (hire the novice instead of the expert).[22]

On October 22, 2012, Sadoway appeared as a guest on The Colbert Report to discuss his liquid metal battery technology and his view that electrochemistry is the key to world peace (batteries usher in the electric age reducing the dependence on petroleum dropping its price thereby destabilizing dictatorships).[23]

Renewables are growing, but even if they could some day replace fossil fuels, there’s a problem: that energy needs to be stored. Currently battery tech isn’t up to the task, but the solution to one of the world’s most pressing problems might just be sitting in Marlborough Massachusetts, in the video “The battery that could make mass solar and wind power viable, Dispatch“, below: “Innovation in Stationary Electricity Storage: The Liquid Metal Battery” Donald R. Sadoway, Professor, Materials Science and Engineering, MIT Energy Seminar – October 31, 2016, in the video “Don Sadoway, Innovation in Stationary Electricity Storage: The Liquid Metal Battery“, below:
One of Time Magazines 100 most influential people in the world, MIT Professor Donald Sadoway, describes the development of a new revolutionary, cost effective, and very durable grid storage liquid metal battery which will revolutionize the electric grid and solve energy storage problems for renewable energy such as solar and wind energy. The presentation was made at the February 18, 2015 MIT Enterprise Forum of Texas program in Houston, in the video “A Revolutionary New Battery for Grid Energy Storage with Donald Sadoway“, below: