Where Is Santa? NORAD Is Tracking 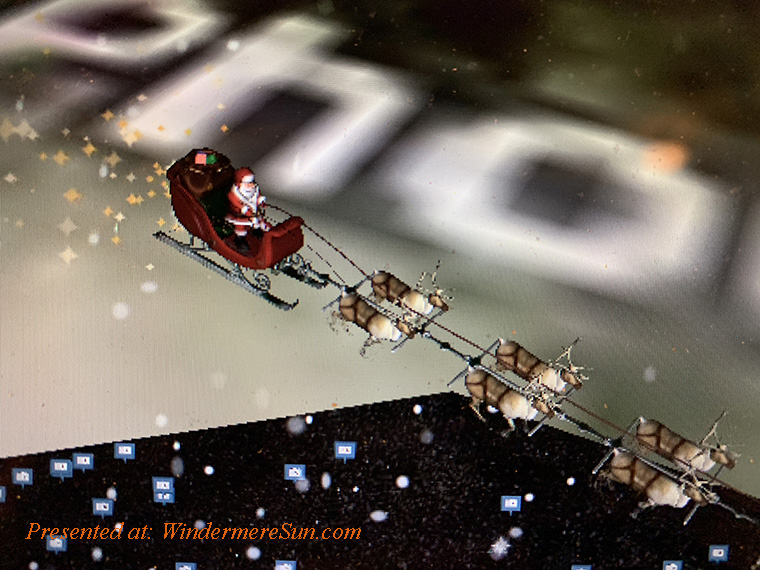 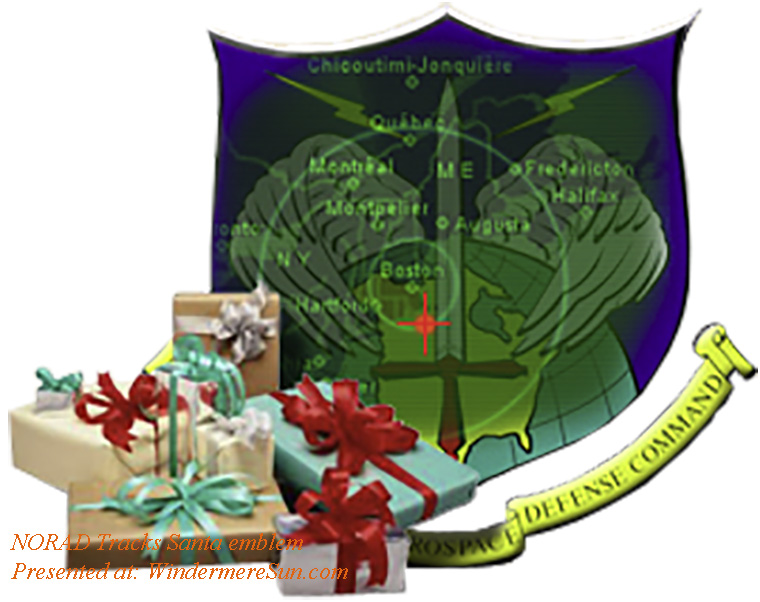 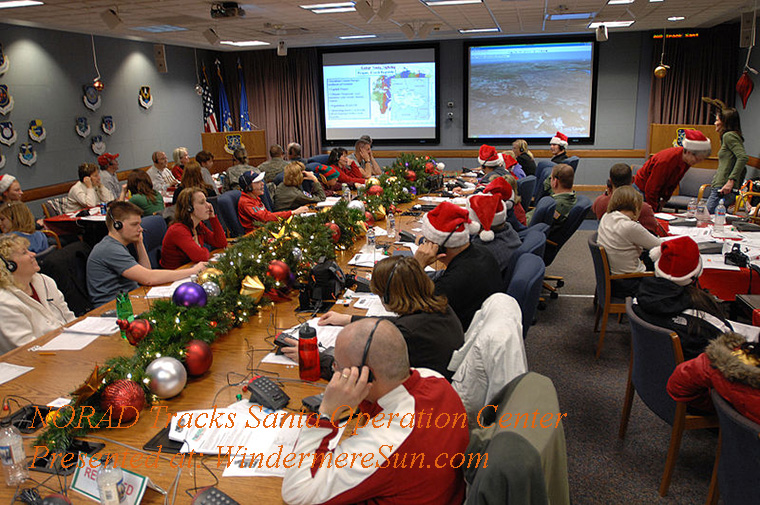 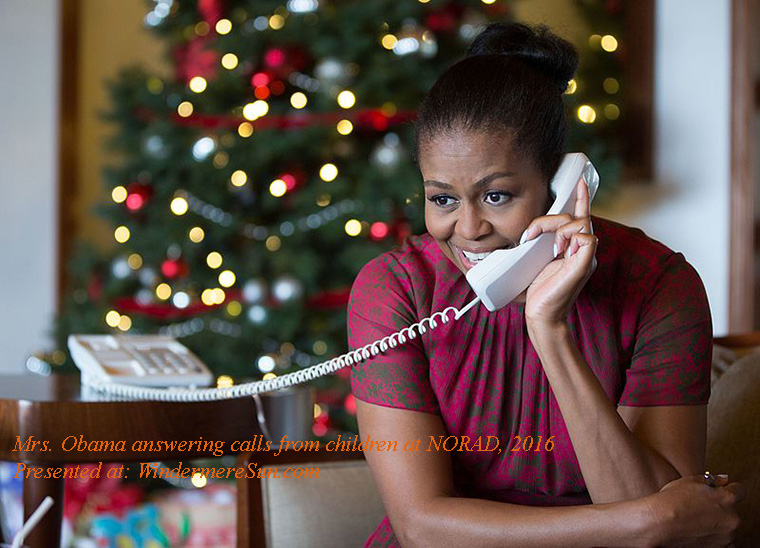 Despite the partial U.S. government shutdown, NORAD (North American Aerospace Defense Command) is not slowing down on its tracking of the Santa Claus as he embarks on his global trek delivering Christmas gifts to children across the globe. The holiday tradition allowing parents and children to Track Santa Claus online during his globe-trotting journey will continue on Christmas Eve even though NORAD receives funding from the Department of Defense.


Watch live coverage of the North American Aerospace Defense Command track Santa Clause as he travels across the globe on his Christmas Eve journey, in the video “Watch Live: NORAD tracks Santa Claus as he flies across the globe“, below: The government may have partially shut down, but the North American Aerospace Defense Command (NORAD) is still tracking Santa Claus’ journey across the globe. Canadian Army Maj. Andrew Hennessy joins CBSN to discuss the program, in the video “NORAD Tracks Santa despite government shutdown“, below:
To better understand how NORAD Tracks Santa, please check out the excerpt from wikipedia, in italics, below:

NORAD Tracks Santa is an annual Christmas-themed program, which has existed since 1955,[1]produced by the North American Aerospace Defense Command (NORAD). Every year on Christmas Eve, NORAD tracks Santa Claus as he leaves the North Pole and delivers presents to children around the world.[1][2][3]

The program is in the tradition of the September 1897 editorial “Yes, Virginia, there is a Santa Claus” in the New York Sun.[4][5]

On December 24, 1948, the United States Air Force issued a communique claiming that an “early warning radar net to the north” had detected “one unidentified sleigh, powered by eight reindeer, at 14,000 feet [4,300 meters], heading 180 degrees.” The Associated Press passed this “report” along to the general public. It was the first time that the United States Armed Forces issued a statement about tracking Santa Claus‘s sleigh on Christmas Eve, although it was a one-time event, not repeated over the next several years.[6]

The program originated before the actual formation of NORAD, as an annual event on December 24, 1955. According to legend, a Sears department store placed an advertisement in the Colorado Springs newspaper The Gazette, which told children that they could place a call to Santa Claus and included the number ME 2-6681.[7] A call allegedly came through to Colorado Springs’ Continental Air Defense Command (CONAD) Center as one digit was misprinted.[8]

In some versions of the story, the calls were coming in to the “red telephone” hotline that connected CONAD directly to command authorities at the Strategic Air Command. Colonel Harry Shoup, who was a Crew Commander on duty, answered the first call and supposedly told his staff to give all children who called in later a “current location” for Santa Claus.[9]

A more accurate description of the events of 1955 appears to be that on November 30 a child trying to reach Santa Claus on a hotline number provided in a Sears advertisement misdialed the number and instead reached Shoup at his desk at CONAD. Shoup responded gruffly to the child, and no additional Santa Claus-related calls came in to CONAD.[6][10]

However, when a member of Shoup’s staff placed a picture of Santa Claus on a board used to track unidentified aircraft that December, Shoup saw a public relations opportunity for CONAD, and he asked CONAD’s public relations officer, Colonel Barney Oldfield, to inform the press that CONAD was tracking Santa Claus’s sleigh. In his release to the press, Oldfield added that “CONAD, Army, Navy and Marine Air Forces will continue to track and guard Santa and his sleigh on his trip to and from the U.S. against possible attack from those who do not believe in Christmas.”[6]

Over the following years, the legend of how the annual event originated began to change. By 1961, Shoup’s version of the story was that he had not been gruff with the child, but instead had identified himself as Santa Claus when he spoke to the child on the phone. Shoup and his family later modified the story further, adding that the child had dialed the “red telephone”—an impossibility, because the hotline was connected with the Strategic Air Command by an enclosed cable, and no one could dial into from the outside—rather than the regular phone on Shoup’s desk, that it was a misprint in an advertisement that led the child to call him rather than the child misdialing the number, and that a flood of calls had come in from children on Christmas Eve 1955 rather than from just one child on November 30.[6]

Shoup did not intend to repeat the stunt in 1956, but Oldfield informed him that the Associated Press and United Press International were awaiting reports that CONAD again was tracking Santa Claus. Shoup agreed that Oldfield should announce it again, and the annual tradition was born.[6][9]

In 1958, the North America Air Defense Command (NORAD) took over the reporting responsibility from CONAD, and the reporting became more elaborate as the years passed. On December 24, 1960, for example, NORAD’s northern command post at Saint-Hubert, Quebec, Canada, provided regular updates of a sleigh operated by “S. Claus” which it identified as “undoubtedly friendly”. During the evening, NORAD reported that the sleigh had made an emergency landing on the ice of Hudson Bay, where Royal Canadian Air Force (RCAF) interceptor aircraft sent to investigate discovered Santa Claus bandaging his reindeer Dancer‘s front foot, after which the RCAF planes escorted him when he resumed his journey.[6]

Eventually, NORAD, which was renamed the North American Aerospace Defense Command in 1981, openly published a hotline number for the general public to call to get updates on Santa Claus’s progress.[6]

Today, NORAD relies on volunteers to make the program possible.[11] Each volunteer handles about forty telephone calls per hour, and the team typically handles more than 12,000 e-mails and more than 70,000 telephone calls from more than two hundred countries and territories. Most of these contacts happen during the twenty-five hours from 2 a.m. on December 24 until 3 a.m. MST on December 25.[9][11] A website called NORADSanta.org was established to allow project access for Internet users.[12]

Google Analytics has been in use since December 2007 to analyze website traffic. As a result of this analysis information, the program can project and scale volunteer staffing, telephone equipment, and computer equipment needs for Christmas Eve.[13] Volunteers include NORAD military and civilian personnel.[14]

The NORAD Tracks Santa program has always made use of a variety of media. From the 1950s to 1996, these were the telephone hotline, newspapers, radio, phonograph records and television. Many television newscasts in North America feature NORAD Tracks Santa as part of their weather updates on Christmas Eve.

From 1997 to the present, the program has had a highly publicized internet presence. As mobile media and social media have become popular and widespread as methods of direct communication, these newer media have also been embraced by the program.[15][16] The layout of the NORAD Tracks Santa website and its webpages have changed from 1997 to the present due to changes in internet technologies, and changes in partners and sponsors for a particular year. In September 2008, NORAD started a Twitter account, @NORADSanta, as part of its social media presence.[17]

Between 2004 and 2009, people who visited the NORAD Tracks Santa site were told they could “track” Santa in Google Earth.[18] They were given a link to download Google Earth, and then a KMZ file to download. From 2009 to 2011, the tracking in Google Earth has been done from the NORAD Santa site, and there is no KMZ file for Google Earth anymore.[19] In 2011, an iOS and Android application was introduced, which features updates and an interactive game similar to Angry Birds.[20]

From mid-January until November 30, when one arrives at the NORAD Tracks Santa website, one is greeted with a message to come back on December 1 to “track Santa with NORAD”. During December, one finds a NORAD Tracks Santa website with all the features available. On Christmas Eve, the NORAD Tracks Santa website videos page is generally updated each hour, when it is midnight in a different time zone. The “Santa Cam” videos show CGI images of Santa Claus flying over famous landmarks. Each video was accompanied by a voice-over until the end of the 2011 season, typically done by NORAD personnel, giving a few facts about the city or country depicted. In 2012 the voice overs were replaced with music done by the US Air Force Band. The voice overs returned in the 2013 season.[21]

Celebrity voice-overs have also been used over the years. For the London “Santa Cam” video, English television personality and celebrity Jonathan Rossdid the voice-over for 2005 to 2007 and the former Beatles drummer Ringo Starr narrated the same video in 2003 and 2004.[22][23] In 2002, Aaron Carterprovided the voice-over for three videos.[24]

Since 2012, Analytical Graphics, Inc. has used their Cesium platform to build a 3D map for visualizing Santa’s location with more accurate global terrain and satellite imagery than before.[25] NORAD reported that for Christmas 2013, it logged 19.58 million unique visitors to its website on Christmas Eve, and 1,200 volunteers answered 117,371 calls. Through social media, it had 146,307 Twitter followers and 1.45 million “likes” on Facebook.[26] That year, NORAD contracted with Bing Maps to provide 2D map tracking, ending a five-year contract with Google.[27]

NORAD Tracks Santa relies on corporate sponsorship, and is financed by neither American nor Canadian taxpayers.[11][28][29]

U.S. military units have provided publicity for the program, including the Northeast Air Defense Sector of the New York Air National Guard and the U.S. Naval Reserve Navy Information Bureau (NIB) 1118 at Fort Carson, Colorado,[30][31] as have the Canadian Armed Forces.[32][33][34]

Other U.S. federal agencies, such as the National Aeronautics and Space Administration (NASA) and National Oceanic and Atmospheric Administration (NOAA), have helped publicize the service.[35][36][37][38][39] Former First Lady Michelle Obama has participated in the program each year since 2009, answering phone calls.[40][41][42]

According to Gerry Bowler, a history professor at the University of Manitoba, the NORAD Tracks Santa program is “one of the few modern additions to the centuries-old Santa Claus story that have stuck.” Bowler stated that the program “takes an essential element of the Santa Claus story—his travels on Christmas Eve—and looks at it through a technological lens,” therefore bringing the Santa Claus mythology into the modern era.[43]

To keep up with where the Santa is at the moment, please check HERE.