Sunrise between stones at Stonehenge on Winter Solstice in the mid-1980s (Attribution: Mark Grant, Presented at: WindermereSun.com) 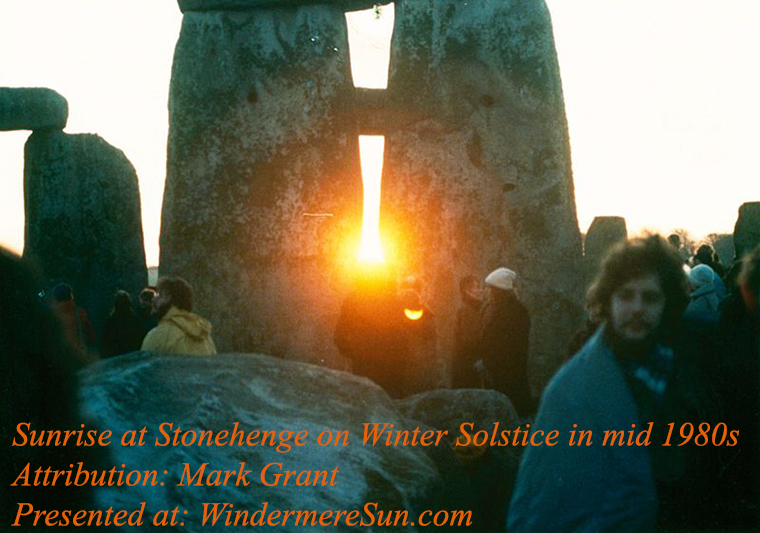 Sunrise between stones at Stonehenge on Winter Solstice in the mid-1980s (Attribution: Mark Grant, Presented at: WindermereSun.com)

December 21, 2018, marks the winter solstice of this year, with shortest day of the year in the Northern Hemisphere, with the Earth’s Northern Hemisphere being as tilted away from the sun as it will ever be,.  It happens once a year in each hemisphere. The winter solstice is particularly special this year as the upcoming December full moon, named the Cold Moon, will be visible in the night sky along with the Ursid meteor shower. In the video “Full Moon and  Unique Planet Alignment for Winter Solstice 2018“, below:

The winter solstice (or hibernal solstice), also known as the midwinter, occurs when one of the Earth’s poles has its maximum tilt away from the Sun. It happens twice yearly, once in each hemisphere (Northern and Southern). For that hemisphere, the winter solstice is the day with the shortest period of daylight and longest night of the year, when the sun is at its lowest daily maximum elevation in the sky.[1] At the pole, there is continuous darkness or twilight around the winter solstice. Its opposite is the summer solstice.

Since prehistory, the winter solstice has been seen as a significant time of year in many cultures, and has been marked by festivals and rituals.[3] It marked the symbolic death and rebirth of the sun.[4][5][6] The seasonal significance of the winter solstice is in the reversal of the gradual lengthening of nights and shortening of days.

Although the instant of the solstice can be calculated,[13] direct observation of the solstice by amateurs is impossible because the sun moves too slowly or appears to stand still (the meaning of “solstice”). However, by use of astronomical data tracking, the precise timing of its occurrence is now public knowledge. One cannot directly detect the precise instant of the solstice (by definition, one cannot observe that an object has stopped moving until one later observes that it has not moved further from the preceding spot, or that it has moved in the opposite direction). Further, to be precise to a single day, one must be able to observe a change in azimuth or elevation less than or equal to about 1/60 of the angular diameter of the sun. Observing that it occurred within a two-day period is easier, requiring an observation precision of only about 1/16 of the angular diameter of the sun. Thus, many observations are of the day of the solstice rather than the instant. This is often done by observing sunrise and sunset or using an astronomically aligned instrument that allows a ray of light to be cast on a certain point around that time. The earliest sunset and latest sunrise dates differ from winter solstice, however, and these depend on latitude, due to the variation in the solar day throughout the year caused by the Earth’s elliptical orbit (see earliest and latest sunrise and sunset).