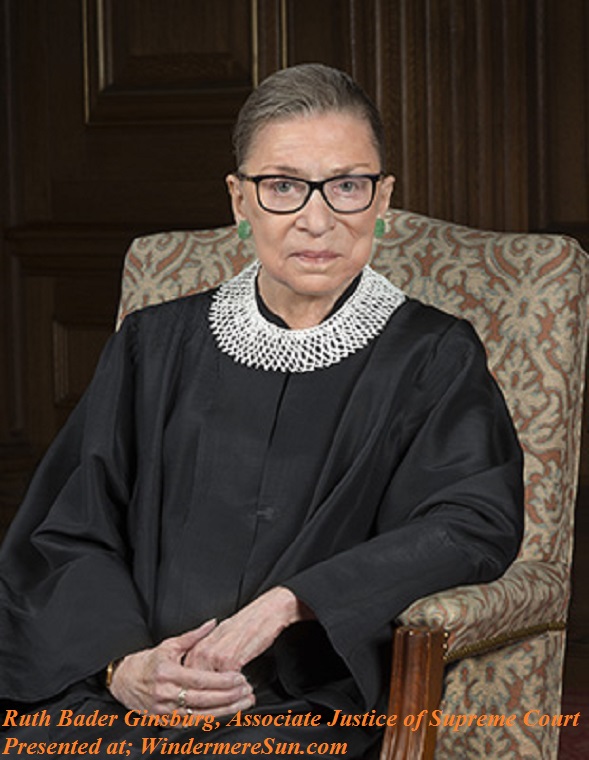 It was not surprising that our Supreme Court Justice Ruth Bader Ginsburg selected the day of Winter Solstice, December 21 or 22 (in Northern Hemisphere) or June 21 or 22 (in Southern Hemisphere), 2018, to have her malignant growths removed from one of her lungs. These cancerous nodules started from her lung, were isolated and removed from her lung. It’s the third time she has been treated for her cancer since 1999. CBS News White House correspondent Weijia Jiang reports, in the video “Justice Ruth Bader Ginsburg recovering after surgery“, below:

For more on Justice Ruth Bader Ginsburg, please refer to the excerpt from wikipedia, in italics, below:

Ruth Bader Ginsburg (/ˈbeɪdər ˈɡɪnzbɜːrɡ/; born Joan Ruth Bader; March 15, 1933)[1] is an Associate Justice of the Supreme Court of the United States. Ginsburg was appointed by President Bill Clinton and took the oath of office on August 10, 1993. She is the second female justice (after Sandra Day O’Connor) of four to be confirmed to the court (along with Sonia Sotomayor and Elena Kagan, who are still serving). Following O’Connor’s retirement, and until Sotomayor joined the court, Ginsburg was the only female justice on the Supreme Court. During that time, Ginsburg became more forceful with her dissents, which were noted by legal observers and in popular culture. She is generally viewed as belonging to the liberal wing of the court. Ginsburg has authored notable majority opinions, including United States v. Virginia, Olmstead v. L.C., and Friends of the Earth, Inc. v. Laidlaw Environmental Services, Inc.

Ginsburg was born in Brooklyn, New York, to Russian Jewish immigrants. Her older sister died when she was a baby, and her mother, one of her biggest sources of encouragement, died shortly before Ginsburg graduated from high school. She then earned her bachelor’s degree at Cornell University, and became a wife and mother before starting law school at Harvard, where she was one of the few women in her class. Ginsburg transferred to Columbia Law School, where she graduated tied for first in her class. Following law school, Ginsburg turned to academia. She was a professor at Rutgers Law School and Columbia Law School, teaching civil procedure as one of the few women in her field.

Ginsburg spent a considerable part of her legal career as an advocate for the advancement of gender equality and women’s rights, winning multiple victories arguing before the Supreme Court. She advocated as a volunteer lawyer for the American Civil Liberties Union and was a member of its board of directors and one of its general counsels in the 1970s. In 1980, President Jimmy Carter appointed her to the U.S. Court of Appeals for the District of Columbia Circuit, where she served until her appointment to the Supreme Court. Ginsburg has received considerable attention in American popular culture; dubbed the “Notorious R.B.G.”, she is seen as a symbol of public resistance, private resilience, and justice.
Gathered, written, and posted by Windermere Sun-Susan Sun Nunamaker
More about the community at www.WindermereSun.com