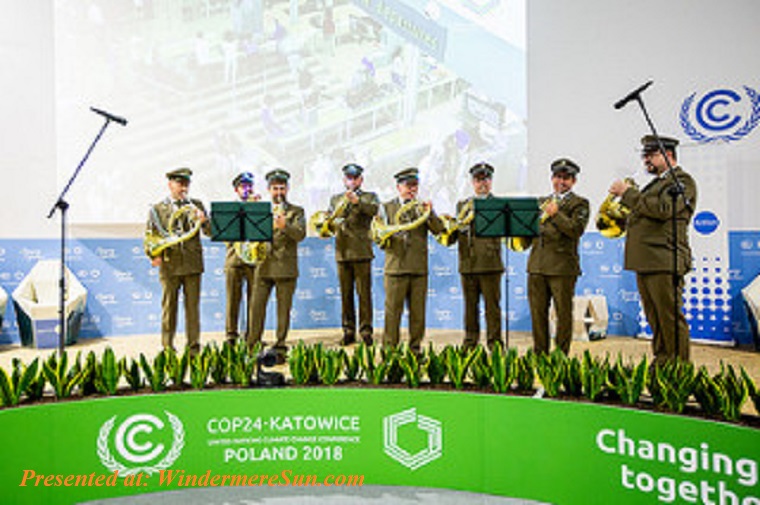 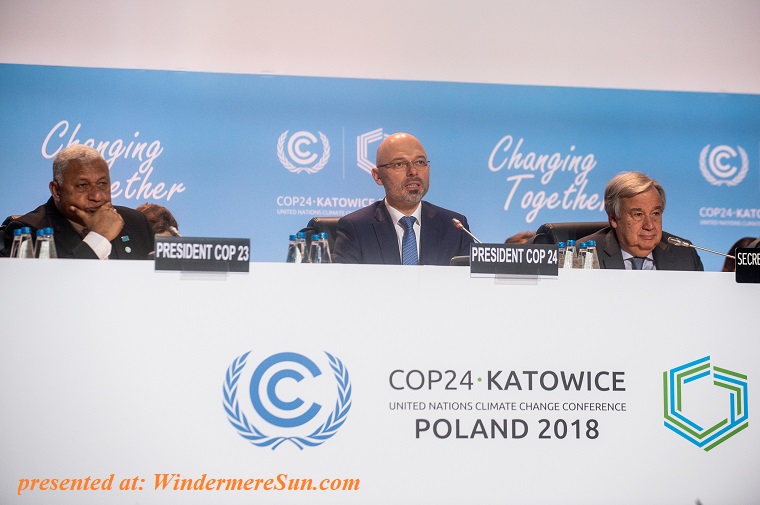 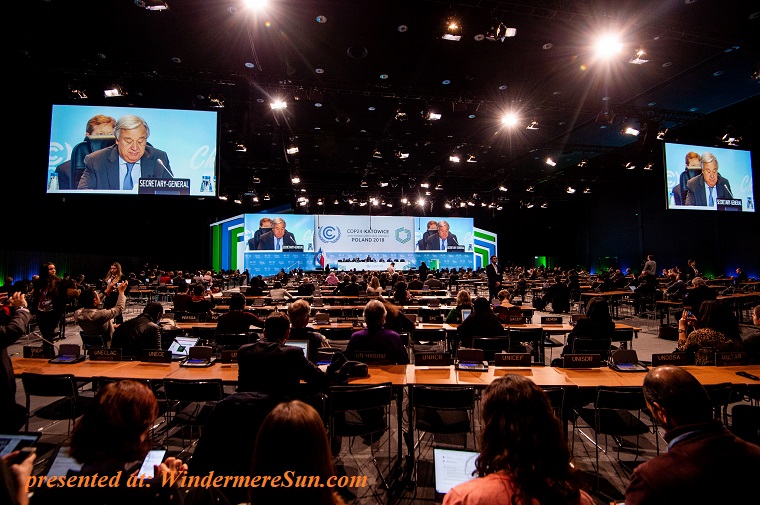 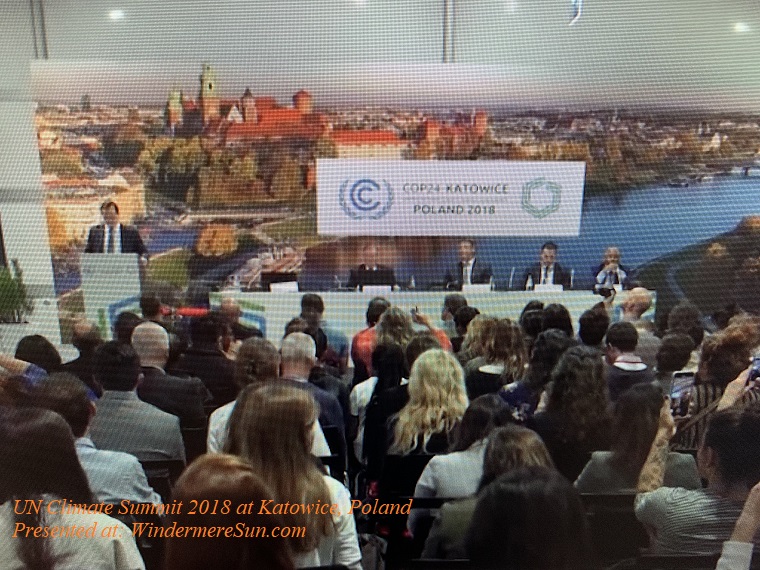 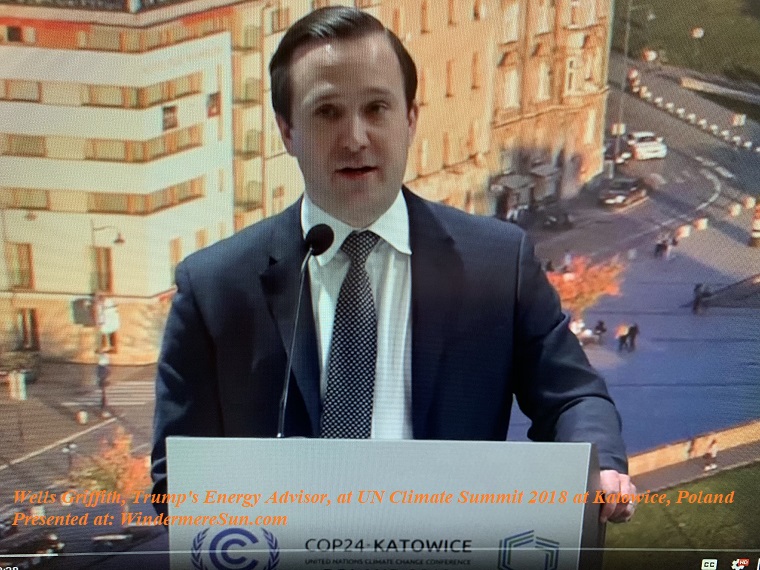 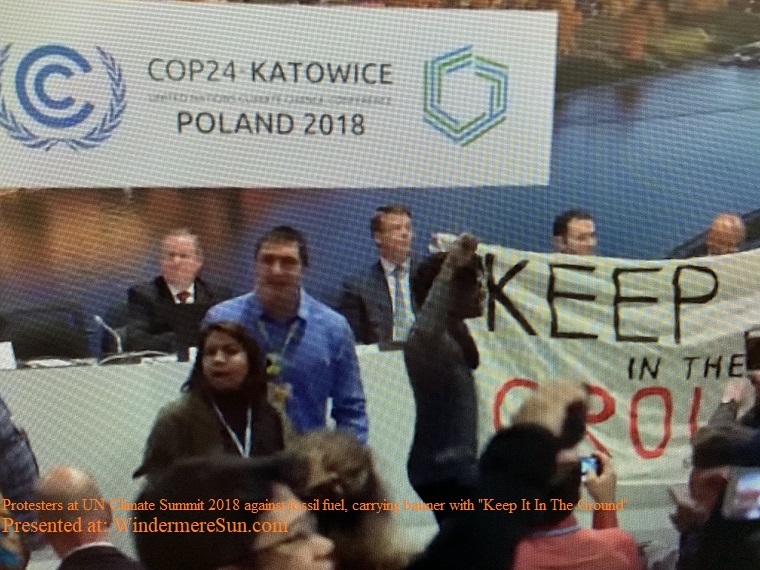 Protesters at the UN Climate Summit 2018 at Katowice, Poland (presented at: WindermereSun.com) 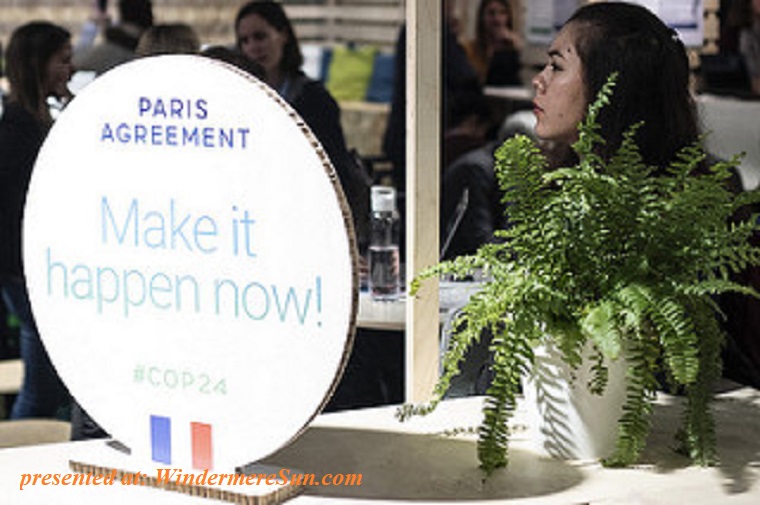 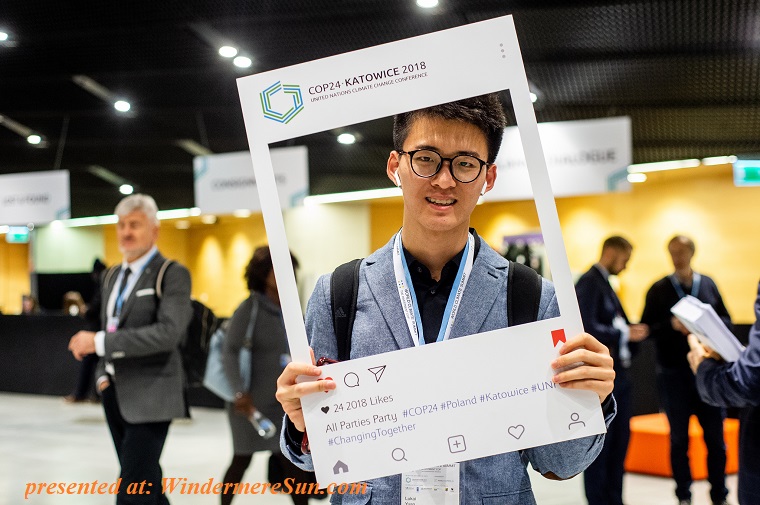 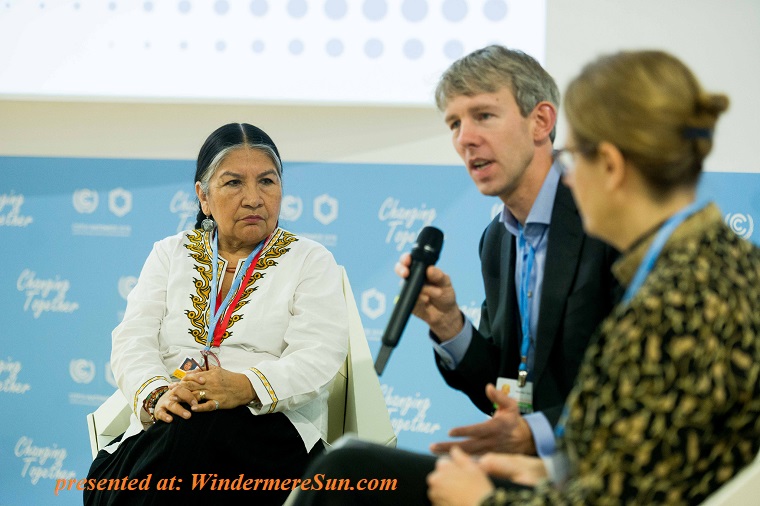 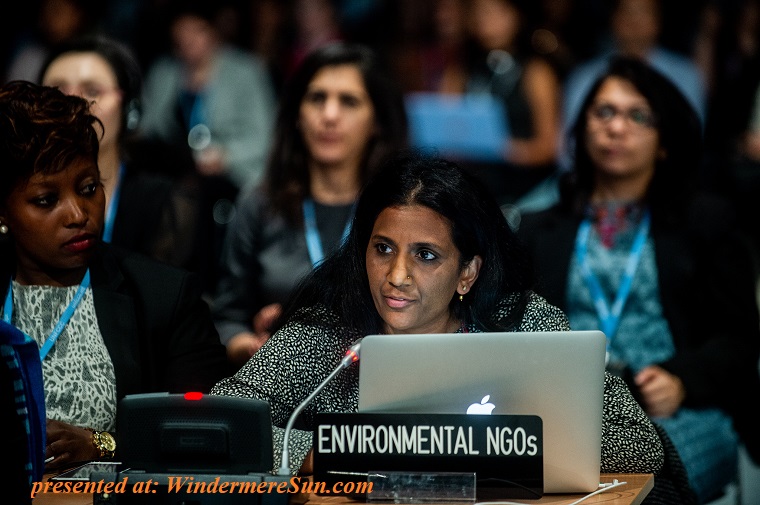 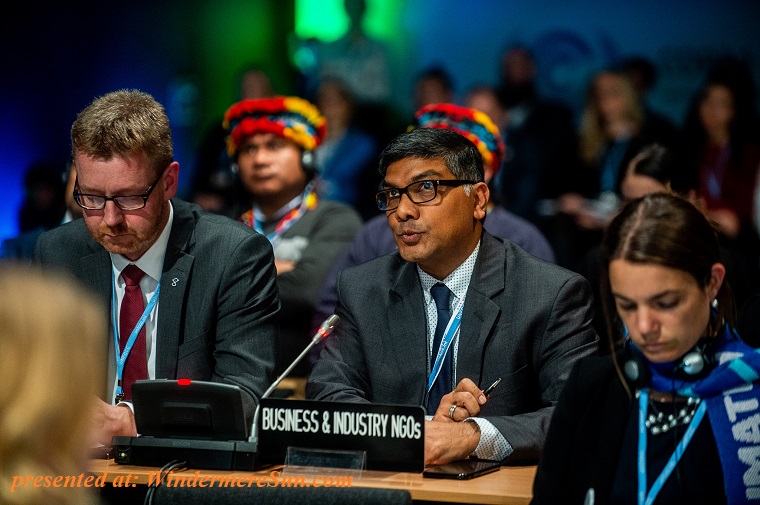 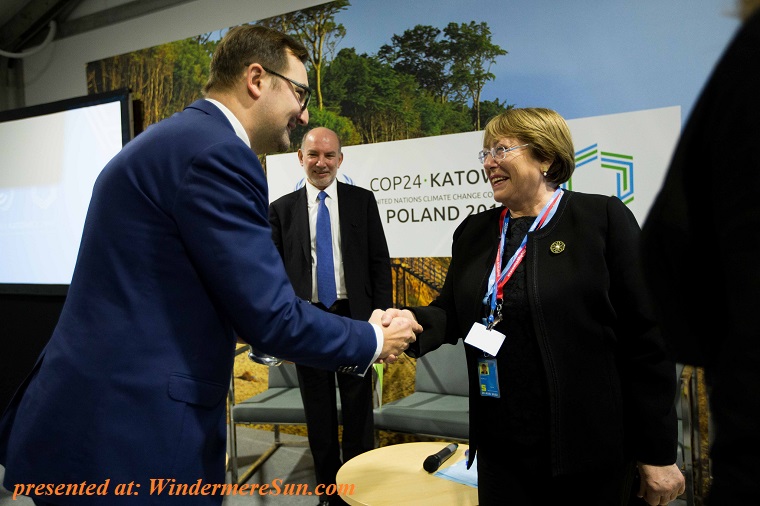 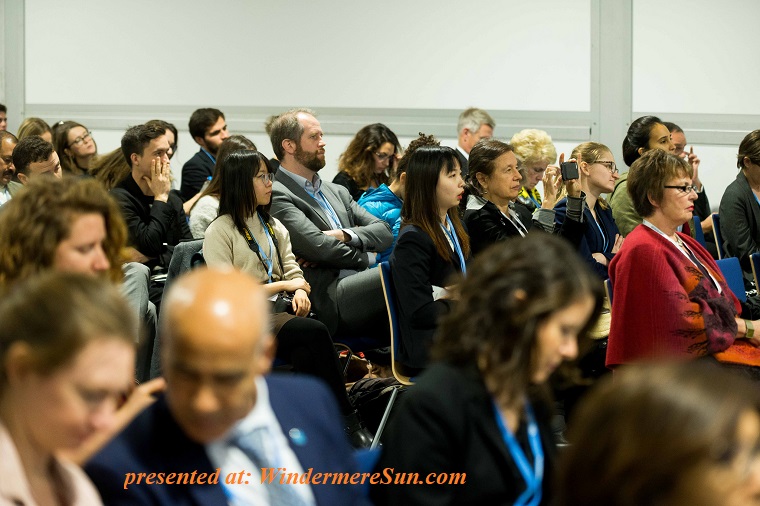 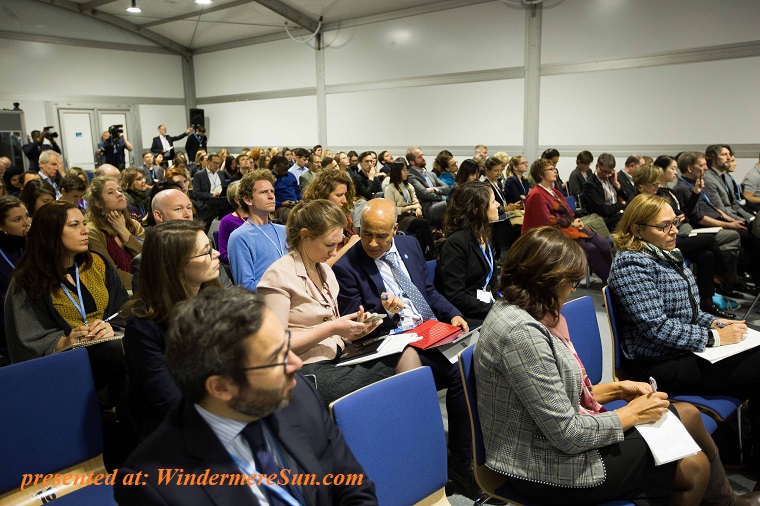 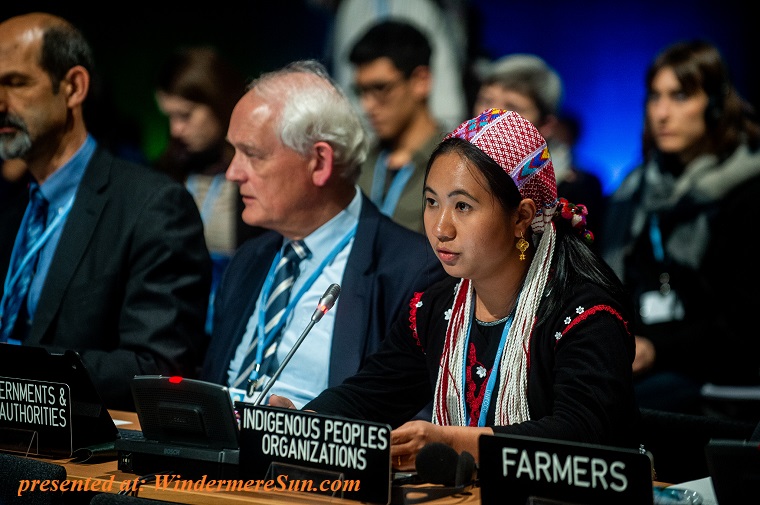 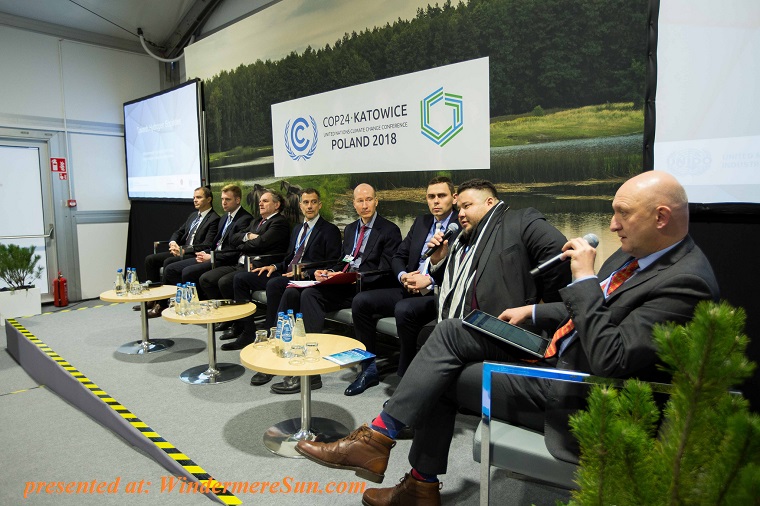 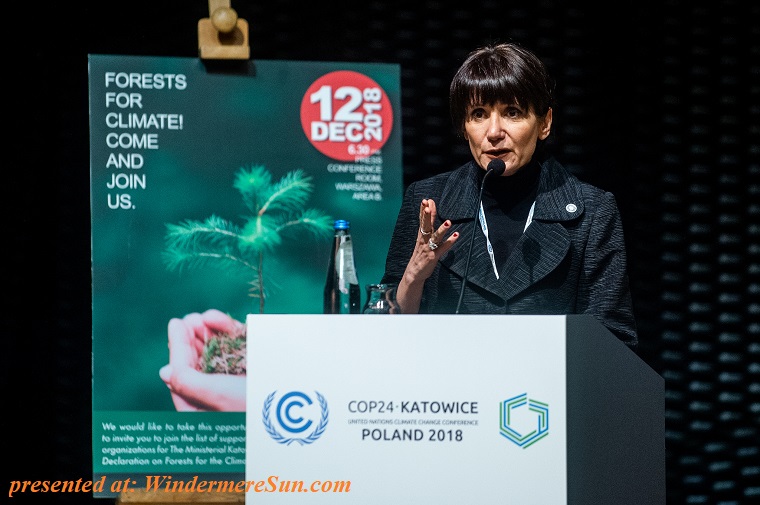 Speaker for Forests For Climate (credit: COP24, presented at: WindermereSun.com) 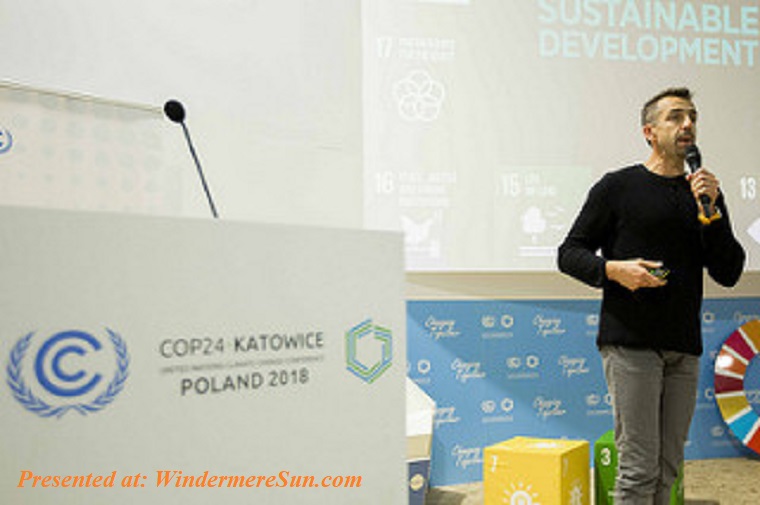 COP24 is the informal name for the 24th Conference of the Parties to the United Nations Framework Convention on Climate Change, taking place from Dec. 3-Dec. 14, 2018, at Katowice, Poland.

Representatives from around 200 nations have gathered for the UN climate talks in Poland. The summit comes against a backdrop of dire environmental warnings and a call for action against the threats posed by climate change. Delegates will seek ways of implementing commitments made in the 2015 Paris treaty to limit the rise of global temperatures. The city of Katowice is  hosting  the most important talks on global warming in years, but Poland itself is still committed to using fossil fuels such as coal, in the video “UN climate change conference 2018 opens in Poland” below:

The 24th United Nations climate summit comes amid growing warnings about the catastrophic danger climate change poses to the world. In October, the U.N. Intergovernmental Panel on Climate Change warned that humanity has only a dozen years to mitigate climate change or face global catastrophe—with severe droughts, floods, sea level rise and extreme heat set to cause mass displacement and poverty. But on Saturday, the United States, Saudi Arabia, Russia and Kuwait blocked language “welcoming” the landmark IPCC climate report. New studies show global carbon emissions may have risen as much 3.7 percent in 2018, marking the second annual increase in a row. A recent report likened the rising emissions to a “speeding freight train.”

As indicated by climate scientist Kevin Anderson, if the top 10% of high emitters would reduce their carbon footprint to the level of that of an average European citizen, that would lead to a reduction by a third of the global emission.

The Trump administration was promoting fossil fuels at the U.N. climate summit in Katowice, Poland, despite outcry from climate activists and world leaders concerned about the devastating threat of climate change. President Trump’s representative at the climate summit is Wells Griffith, special assistant to the president for international energy and environment. He is a longtime Republican operative who served as deputy chief of staff to Reince Priebus when Priebus was chair of the Republican National Committee.

Protesters disrupted a COP24 press conference after a US representative said there will be no change to the American climate policy, adding fossil fuels and nuclear energy will not be going away any day soon, in the video “Watch: Protest breaks out at COP24 speech announces no change to climate policy” below:


Amy Goodman of Democracy Now! attempted to question Wells Griffith about the Trump administration’s climate policy at the U.N. summit on Tuesday, December 11, 2018, but Griffith refused to answer questions and ran from the camera team of Democracy Now! for about a quarter-mile, retreating to the U.S. delegation office, in the video “Trump’s  Energy Adviser Runs Away When Questioned by Democracy Now! at U.N. Climate Talks” below:  The Trump administration has flown in the face of the #COP24 climate conference in Poland, hosting a presentation extolling the virtues of fossil fuels. @stefandevries is at the summit in Katowice, Poland with more on this story, in the video “US presentation on fossil fuels ‘a joke’ at COP24 summit” below:  Sir David Attenborough paints a bleak picture of Earth’s future, warning the extinction of much of the natural world is on the horizon as he speaks to Sky’s Thomas Moore. He told Sky News: “We have so much knowledge, skill and ingenuity. Of course we can do something about it. The question is how much….Homo salients is a very ingenious species. It got us into this mess, true, but it knew not what it did. I believe now is the moment to use that ingenuity and that passion to get us out of it.” in the video “Sir David Attenborough urges leaders to aim ‘high’ at climate talks” below: The former governor of California Arnold Schwarzenegger calls for more action to tackle climate change at COP24 in Katowice, Poland, asking to include local leaders to be involved in the COP25 next year, in the video “Arnold Schwarzenegger calls for climate action at COP24 in Katowice, Poland” below: So, local climate change and sustainability leaders, be ready to attend next year.
Gathered, written, and posted by Windermere Sun-Susan Sun Nunamaker
More about the community at www.WindermereSun.com