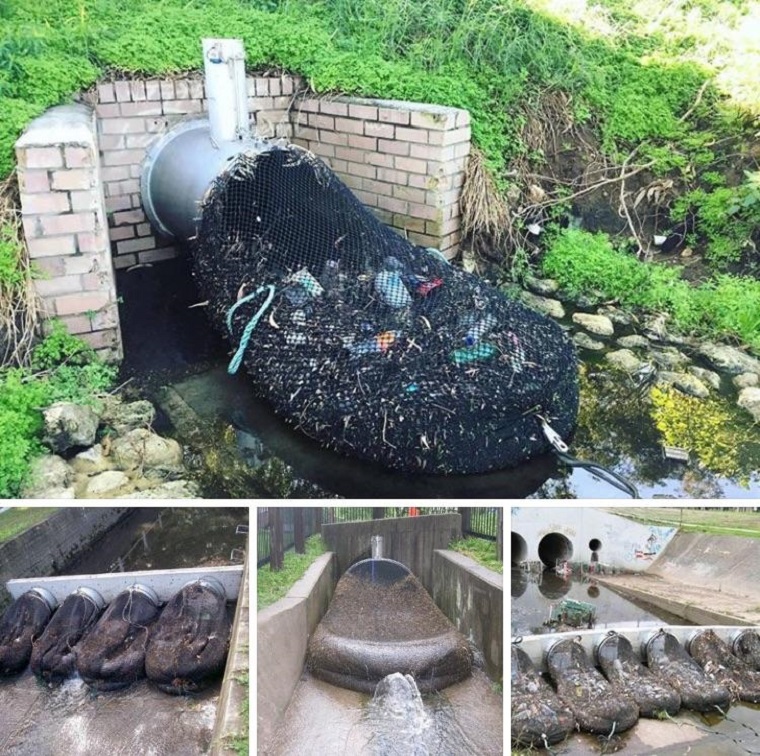 Australian folks had always impressed me as being rather clever and pragmatic folks. A recent post in Reddit once again proved this point. The concept is simple and cost is low in solving water pollution problem at the end of any storm drain. Aussies developed this simple and cost-effective filtering system in the photo images above, retaining 815 pounds (370 kg) of garbage to be recycled in the first 6 months of use. The City of Kwinana, in Western Australia, had hailed the trial of two new drainage nets a success in its journey toward less waste and increased sustainability.

In the video published on Nov. 29, 2018, “Australian Town Comes Up With A Genius Way Of Stopping Pollution“, below:

In the video published on June 12, 2019, “Ingenious Australian Solution Is Ridding Water Of Plastic Waste“, below:

The nets were installed at two reserve locations earlier this year to reduce rubbish from drainage systems within the city, especially in areas where road drainage is discharged into public open spaces and reserves. Mayor of Kwinana, Carol Adams said, “The nets capture gross pollutants carried by stormwater from the local road network before those pollutants are discharged and contaminate the natural environment at the downstream end of the outlet area. This ensures that the habitat of the local wildlife are protected and minimizes the risk of wildlife being caught in the nets. Its success just goes to show how important it is for Government at all levels start to focus on environmental initiatives such as these and realize that small actions can have big impacts.”

Aussies had continued to identify more suitable drainage points for further nets to be installed following this trial’s success. Perhaps communities from across the globe may also benefit from Aussies’ experience.

Similar ideas were used in other countries, for example, below:

At the McKay Bay Nature Preserve in Tampa, Florida, USA, a storm drain outflow carries a steady flow of garbage from the streets of Ybor City and it’s headed for McKay Bay. But before it gets there, it’s captured by the Water Goat, in video published on Aug 16, 2017, “‘Water Goat’ system keeps trash from bay“, below:

1. This bin collects garbage from the sea. Seabin has a pump that creates a flow of water. The garbage is caught in a bag, allowing water to flow out back to sea. 2. This machine crushes beer bottles into usable sand. 200 grams of powder form each bottle is recycled to preserve beaches. 3. SaltWater Brewery created edible packaging to save sea life. The six-pack rings are made of barley and wheat. Sea life can eat the rings safely. 4. AIR-INK can turn air pollution into ink. it collects carbon soot from a car’s exhaust. Then it is processed into a high-quality black ink. 5. These edible water blobs are biodegradable. The capsule is made from a seaweed extract. A greener solution to creating waste-free packaging. 6. This “Ocean Cleanup” machine has a giant floating pipe to capture plastic. The pipe moves with the waves and has floating anchors. The plastic is a; gathered in the center for a boat to remove. 7. Avani’s biodegradable bags are saving sea life and reducing ocean pollution. They are made from cassava root and natural starches. Making them harmless for animal consumption. 8. This machine recycles tires. They are turned into rubber crumb for artificial grass. 9. Aquaponics combines fish farming and hydroponics. As the fish eat and grow they produce waste. The wastewater is given to plants as a fertilizer. The plants absorb the nutrients in the water and they are returned to the fish tanks. A natural process to growing food. 10. HomeBiogas 2.0 turns food scraps into cooking gas. The gas flows from the system directly to the kitchen stove. It can be fed up to six liters of waste and digest almost anything. HomeBiogas can also create fertilizer that goes back into soil, in the video published on Jan 11, 2018, “These 10 Inventions Are Saving The Earth“, below: