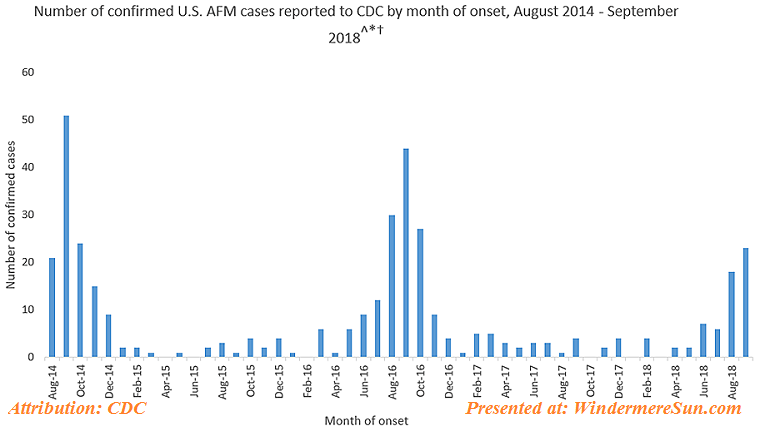 So far CDC (Centers for Disease Control and Prevention) says there are 127 suspected and 62 confirmed cases of AFM (Acute Flaccid Myelitis) across 22 states in the United States.  As of September 20, 2018, the CDC had confirmed 38 cases in 16 states, which did not require AFM cases to be reported to CDC. This year’s numbers are similar to that of 2014 and 2016. On Tuesday, Oct. 16, 2018, CDC said that since 2014, 386 cases had been confirmed. The average age of those afflicted is 4. About 90% of those with AFM are 18 or younger, according to CDC. AFM is a rare condition that affects a person’s nervous system, specifically the spinal cord, causing weakness in one or more limbs.


Below, in italics, is an excerpt from CDC web site:

Acute flaccid myelitis (AFM) is a rare condition. It affects a person’s nervous system, specifically the spinal cord, causing weakness in one or more limbs. AFM or neurologic conditions like it have a variety of causes such as viruses, environmental toxins, and genetic disorders.

Since August 2014, CDC has seen an increased number of people across the United States with AFM. We have not confirmed the cause for the majority of these cases. CDC has been actively investigating these AFM cases, and we continue to receive information about suspected AFM cases.

What This Graph Shows

The graph shows the number of AFM cases confirmed by CDC as of October 16, 2018, with onset of the condition through September 30, 2018.

We defer to the states to release additional information on cases as they choose.

*The case counts are subject to change.

Since 2014, CDC has learned the following about the AFM cases:

What We Don’t Know

Among the people who were diagnosed with AFM since August 2014:

See prevention for information about how to protect your family from viruses that may cause AFM.

What CDC Is Doing

Since not much is known about the cause of AFM, Windermere Sun will try to gather some information about any all around immune boosting ingredients in the next post, Ways To Boost Your Immune System