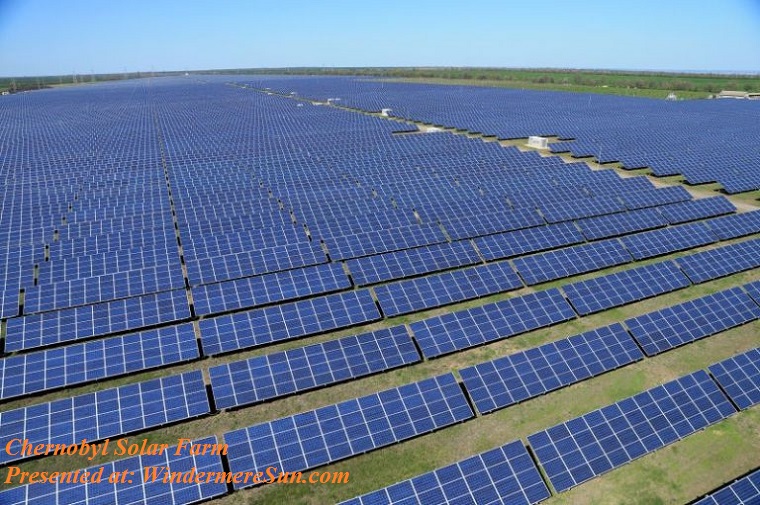 
After the infamous meltdown in 1986 resulted from a flawed reactor design and poor training, other nuclear reactors at the Chernobyl facility continued to operate until the turn of the century. For the past 18 years, Chernobyl has been nothing but an abandoned wasteland due to the high level of radiation, making the Chernobyl exclusion zone unsuitable for agriculture or forestry. This exclusion zone is a 1000 square mile area around the Chernobyl nuclear plant mostly uninhabited and unused since the 1986 disaster. Since there is already substantial electrical infrastructure in place left over from the nuclear plant and the fact that the land is unused and cheap, the site is an excellent choice for large solar farm(s) to be installed. “It’s not just another solar power plant…it’s really hard to underestimate the symbolism of this particular project. ” the chief executive of Solar Chernobyl LLC, Evhen Variagin, told reporters at the unveiling of a 1 MW joint project that can power 2,000 homes, on Friday, October 5, 2018, by Ukrainian company Rodina and German company Enerparc AG, costing about $1.2 million (1 million euros) and benefiting from feed-in-tariffs that guarantee a certain price for power. The head of the Chernobyl nuclear plant Valery Seyda said, “It is the first time the site has produced power since 2000, when the nuclear plant was finally shut down. But now we are seeing a new sprout, still small, weak, producing power on this site and this is very joyful.”
Between January and September of this year (2018), more than 500 MW of renewable power capacity is added to Ukraine, more than twice as much as in 2017, according to the Ukrainian government.The head of the Office of the National Investment Council of Ukraine, Yulia Kovaliv, said investors want to reap the benefits from a generous subsidy scheme before parliament is due to vote on scrapping it in July next year.  “Investors expect that in the renewable energy sector facilities launched before 2019 will operate on the current beneficial system of green tariffs…that is why investors want to buy ready-to-build projects in order to complete construction before that time.” Yulia Kovaliv told Reuters reporter on the sidelines of a conference in Odessa in September.
Cheap land and sunny skies are attracting interests from around the world. Two Chinese companies, GCL System Integration Technology Co. Ltd. and China National Complete Engineering Corp,  are also building a one-gigawatt solar power plant (enough to power 100 million LED bulbs) to the South of Chernobyl. Another dozen smaller investors are also installing solar parks nearby on a smaller scale. These entrepreneurs are not deterred by the challenges of major construction projects in nuclear contamination zone. Engineering work has already begun, but there has not been any public disclosure about safety measures, the completion date, nor a price for the project.