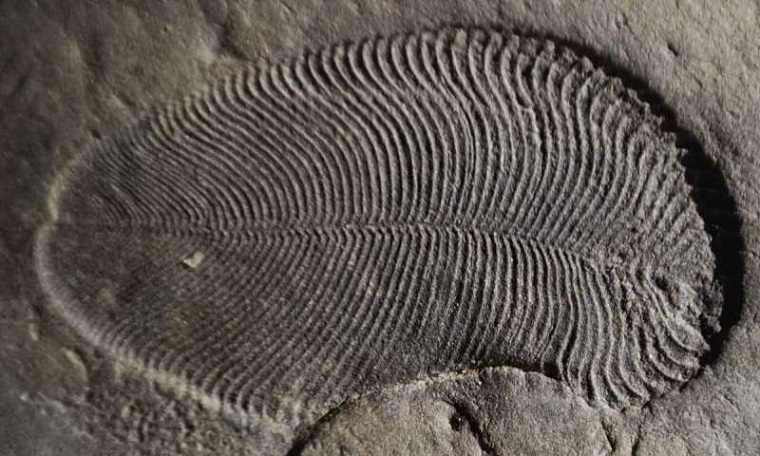 Fat molecules discovered on the fossil of a mysterious creature, Dickinsonia (with oval shape, and rib-like segments running along its body), was part of the Ediacara biota that lived on earth 20 millions years prior to the Cambrian Explosion of modern animal life. These fat molecules have confirmed that it lived 558 million years ago, making it the earliest known member of the animal kingdom and the oldest known animal in the geological record. No wonder scientists are calling it “the Holy Grail of palaeontology.”


The fossil was first discovered by Australian scientists on a remote Russian cliff  by the White Sea in 1947, and the study published on Friday, September 21, 2018, in Science magazine, brought an end to decades old debate to identify what it was. The findings placed its existence about 20 million years before the Cambrian Explosion event, when major animals began to appear to the fossil record.
Abstract of the publication, in italics, below:

The enigmatic Ediacara biota (571 million to 541 million years ago) represents the first macroscopic complex organisms in the geological record and may hold the key to our understanding of the origin of animals. Ediacaran macrofossils are as “strange as life on another planet” and have evaded taxonomic classification, with interpretations ranging from marine animals or giant single-celled protists to terrestrial lichens. Here, we show that lipid biomarkers extracted from organically preserved Ediacaran macrofossils unambiguously clarify their phylogeny. Dickinsonia and its relatives solely produced cholesteroids, a hallmark of animals. Our results make these iconic members of the Ediacara biota the oldest confirmed macroscopic animals in the rock record, indicating that the appearance of the Ediacara biota was indeed a prelude to the Cambrian explosion of animal life.

Fossils of Dickinsonia, bilaterally symmetrical oval organisms, have been particularly difficult to classify. Bobrovskiy et al. conducted an analysis using lipid biomarkers obtained from Dickinsonia fossils and found that the fossils contained almost exclusively cholesteroids, a marker found only in animals (see the Perspective by Summons and Erwin). Thus, Dickinsonia were basal animals. This supports the idea that the Ediacaran biota may have been a precursor to the explosion of animal forms later observed in the Cambrian, about 500 million years ago.

Jochen Brocks, a member of the research team from the ANU (Australian National University) said “The fossil molecules that we’ve found prove that animals were large and abundant 558 million years ago, millions of years earlier than previously thought.”