Kavanaugh Nomination Should Be Removed 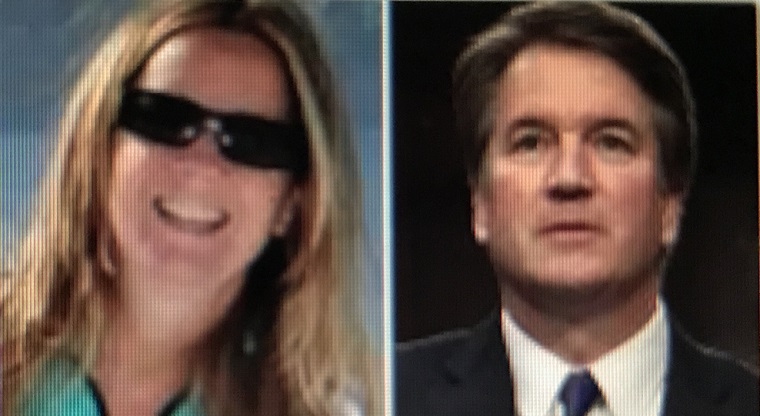 In recent weeks, after the Supreme Court nominee Brett Kavanaugh was reported to be on the shortlist to become an Associate Justice of the Supreme Court of the United States, Christine Blasey Ford contacted both The Washington Post via a tip line and her Representative Anna Eshoo.[5]

In late July, she (Christine Blasey Ford) sent a letter via Eshoo’s office to Senator Dianne Feinstein, alleging Kavanaugh had sexually assaulted her when both were in high school, and saying she expected her story to be kept confidential.[5][22] In August she took a polygraph test with a former FBI agent, who concluded she was being truthful when she endorsed a statement summarizing her allegations as accurate.[5] Feinstein referred Ford’s letter to the FBI, which redacted Ford’s name and forwarded the letter to the White House[5] as an update to Kavanaugh’s background check.[23] The White House in turn sent the letter to the Senate Judiciary Committee.[5]

On September 16, 2018, after the accusations were made widely known in the media and reporters started to track down her identity, Ford went public.[24] Ford had wrestled with the choice to make her identity known, weighing the potential negative impact it could have on her.[25][26] According to her, the sexual assault took place in the summer of 1982 when she was 15 and he was 17.[27][28][29] She told The Washington Post that, with another boy watching, Kavanaugh, intoxicated, held her down on a bed with his body, grinding against and groping her, covering her mouth when she tried to scream and trying to pull her clothes off.[30][31] She recounted escaping when the second boy jumped on them both and they all fell.[5] Ford provided The Post with the polygraph as well as session notes from her therapist written in 2012.[5] The therapist’s notes do not name Kavanaugh but record her claim of being attacked by students “from an elitist boys’ school” who went on to become “highly respected and high-ranking members of society in Washington”. The therapist’s notes also say four boys were involved, which Ford attributed to an error by the therapist; Ford said in 2018 that four boys were at the party but only two were involved in the incident.[5] Ford’s husband recalled that she had used Kavanaugh’s last name in her 2012 description of the incident.[5] Judge Kavanaugh has categorically denied Ford’s allegations.[32] Ford retained civil rights lawyer Debra Katz to represent her throughout the process of going public with her statements about Kavanaugh.[9][24]

On September 18, Ford’s attorneys sent a letter to Senate Judiciary Chairman Chuck Grassley requesting that the FBI investigate the incident before the Senate holds a hearing on Ford’s allegations. “A full investigation by law enforcement officials,” the letter said, “will ensure that the crucial facts and witnesses in this matter are assessed in a non-partisan manner, and that the Committee is fully informed before conducting any hearing or making any decisions.” The letter also stated that Ford had received a “stunning amount of support from her community,” but had also become “the target of vicious harassment and even death threats” and was forced to leave her home. Ford’s attorney Lisa Banks told CNN’s Anderson Cooper, “She will talk with the committee. She is not prepared to talk with them at a hearing on Monday [September 24]. This just came out 48 hours ago.”[33] The same day, a crowdfunding campaign was created to defray Ford’s security costs. The fund surpassed its $100,000 goal in less than 24 hours.[34][35]

In a letter to Senate Judiciary Committee Chairman Chuck Grassley, Christine Blasey Ford’s lawyers say that FBI investigation would serve as a first step in the process to their client testifying in public.  CBS News congressional correspondent Nancy Cordes joins CBSN with the latest reaction from lawmakers on Capitol Hill, in the video “Christine Blasey Ford wants FBI to investigate her allegation against Kavanaugh” below:

Dr. Christine Blasey Ford requests an FBI investigation into her accusation against Brett Kavanaugh before she testifies— but Chairman Grassley says there’s no reason to delay. Lawrence O’Donnell discusses with former Senate Judiciary Committee staffers Bob Schiff and Lisa Graves, in video “Chuck Grassley Responds To Brett Kavanaugh Accuser’s Request For FBI Probe” below:
Legal analysts Maya Wiley and Mimi Rocah join author Sophia Nelson for a discussion on the latest details involving Brett Kavanaugh’s accuser, Dr. Christine Blasey Ford, and her request for an FBI investigation ahead of a hearing, in the video “Why An Investigation Now Into Brett Kavanaugh Matters” below:
Rachel Maddow replays some of Anita Hill‘s testimony against Clarence Thomas to the Senate Judiciary Committee and notes the familiar themes emerging in the sexual assault accusation against Brett Kavanaugh, which will now be heard in a Senate hearing in the video “Accusation Against Brett Kavanaugh Resonates With Anita Hills’s Example” below: Director Michael Moore speaks to CNN’s Chris Cuomo about allegations of sexual assault against Supreme Court nominee Brett Kavanaugh, in the video “Moore: Kavanaugh nomination should be removed” below: Aside from this accusation, it had been demonstrated that Brett Cavanaugh was capable of lying under oath, according to Senator Dick Durbin. Furthermore, the fact that Brett Kavanaugh  believed any sitting president of the United States should not be distracted by investigations and lawsuits , and that Brett Kavanaugh would permit government to impose stricter regulation of abortion, making him a poor choice for Supreme Court nominee. It is my personal belief that any Supreme Court Justice of the United States should have great respect for the judicial system in our democracy. The willingness to lie under oath should immediately disqualify him from being considered as the Supreme Court nominee. The accusation by Dr. Christine Blasey Ford, if proven to be accurate, would simply reaffirm the correctness in his disqualification.