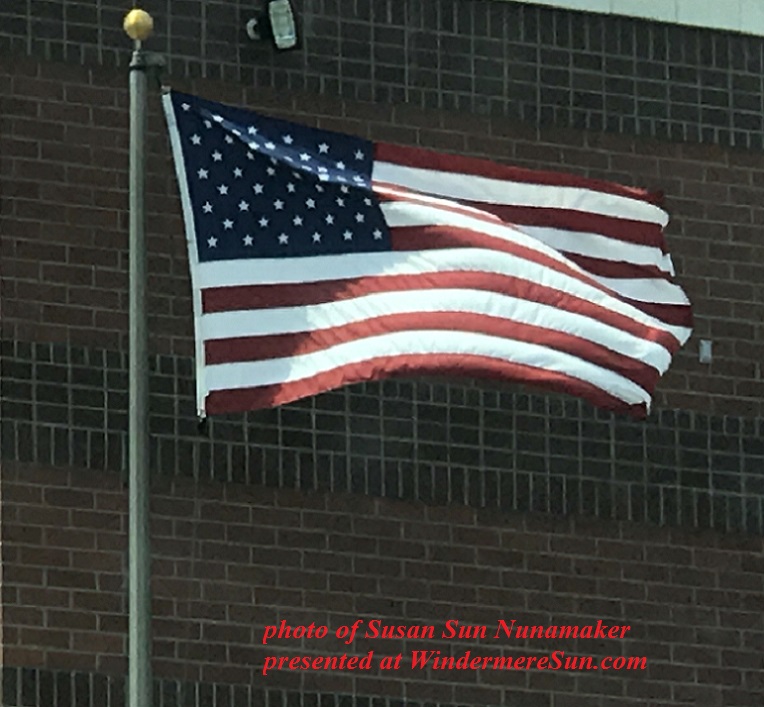 This November, Florida’s Amendment 4, Voting Rights Restoration for Felons Initiative, if approved by 60% of the Florida voters, will automatically restore the right to vote for people with prior felony convictions (except those convicted of murder or a felony sexual offense), upon completion of their sentences, including prison, parole, and probation.

Historically, it had been common in the USA to make felons ineligible to vote, some times permanently. But within the past few decades, the general trend had been toward reinstating the right to vote at some point, depending on the state. At the moment, different states had been approaching felon disenfranchisement very differently. NCSL (National Conference of State Legislatures) had divided 50 states into 4 categories in the TABLE ONE below, based on data collected up to April of 2017: 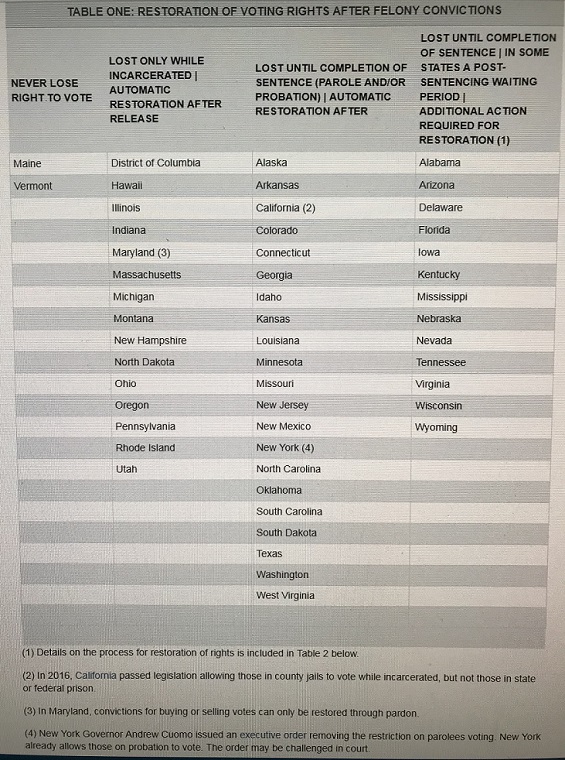 NCLS (National Conference of State Legislatures)’s Table for Restoration of Voting Rights After Felony Conviction as of April 2017 (Attribution: NCLS, Presented at: WindermereSun.com)

Slight addition to the Table above: both states of Vermont and Maine do not practice felon disenfranchisement.

In the State of Florida, persons convicted of a felony are stripped of their voting rights in addition to other sentencing. This restriction lasts for life, and the right can only be restored through special permissions from both the governor and the state clemency board. This practice is known as felony disenfranchisement and it is a common punishment across the United States, being law in 48 states (not practiced in Vermont and Maine). However, Florida is one of only thirteen states that bans convicted felons from voting post-sentence and one of only four (Florida, Iowa, Kentucky, and Virginia) that maintains that ban for life.

Excerpt from wikipedia on Felon Disenfranchisement in Florida, in italics, below:

Florida’s constitution was ratified in 1838 and with that felony disenfranchisement was established in Florida. Article VI section 13 of the original state constitution states, “Laws shall be made by the General Assembly, to exclude from office, and from suffrage, those who shall have been or may thereafter be convicted of bribery, perjury, forgery, or other high crime, or misdemeanor.”[3] This law took effect in 1845 when Florida became a U.S. State and remained largely intact despite notable wording changes in 1868 and 1968 until 2007.

During the constitutional convention of 1868, Florida largely overhauled its constitution. This overhaul included a small expansion of the felon voting section which was changed to say, “nor shall any person convicted of felony be qualified to vote at any election unless restored to civil rights… The Legislature shall have power and shall enact the necessary laws to exclude from every office of honor, power, trust, or profit, civil or military, within the State, and from the right of suffrage, all persons convicted of bribery, perjury, larceny, or of infamous crime.”[4] This change is minor; however, it is the first time that the word “felony” has been used in official documents to describe actions that warrant exclusion from voting rights.

There were no reform efforts of note nor any changes to the felon voting section of the constitution until 1968. In 1968, the section was simplified to only include only felonies as reasons to ban criminals from voting; the other reasons of bribery, perjury, larceny, and infamous crimes were removed.[5] This version of the law would stand until 2007.

In 1974, the Florida Legislature passed a bill that would allow felons to regain the right to vote upon the conclusion of their sentences. However, the Florida Supreme Court ruled that the bill was unconstitutional because it bypassed the governor’s clemency power. Though, many spoke out throughout the rest of the 20th century, this remained as the only real attempt at reform until the 21st century.

On September 22, 2000, the Brennan Center for Justice represented eight ex-felons that filed a civil complaint against the state of Florida claiming that Florida’s implementation of felony disenfranchisement violated the Federal Voting Rights Act as well as the first, fourteenth, fifteenth, and twenty-fourth amendments of the U.S. Constitution. The case, known as Johnson v. Bush, lasted until 2005 when the 11th Circuit Court of Appeals ruled that the law would stand.[6]

On April 5, 2007, Governor Charlie Crist was able to pass legislation that allowed ex-felons to regain the right to vote if approved by the Parole Commission. Crist intended this reform to include automatic reinstatement for all ex-felons that were not convicted of murder or violent sex crimes; however, other public officials at the time felt that that was too lenient on criminals. This reform ultimately allowed over 150,000 ex-felons to regain the right to vote, but, was reversed in March of 2011 under governor Rick Scott. Rick Scott also added the additional barrier of a five-year waiting period between the end of a sentence and application for voting reinstatement. This current iteration of the law has remained unchanged through today.

On 1 February 2018, federal judge Mark Walker ruled that Florida’s process of choosing which ex-felons should have their voting rights restored was unconstitutional. Walker argued that Florida’s system for re-enfranchisement is left too wide open for interpretation. He stated that because of this, the decision to reinstate voting rights is left up to the personal discretion of the Governor and the clemency board. According to Walker, this allows for personal bias to influence decisions. For this reason, Walker declared Florida’s system of restoring rights unconstitutional.

U.S. District Judge Mark Walker of Tallahassee issued a permanent injunction in support of the Fair Elections Legal Network that sued the state of Florida about a year ago.  The group successfully challenged the constitutionality of Florida’s 150 year old voting rights restoration process for felons in the nation’s third largest state. In Judge Walker’s ruling, he suggested that felons should not have to wait more than one four-year election cycle for a decision on their voting rights petitions. In March of 2018, the judge ordered Governor Rick Scott and the Cabinet to dismantle Florida’s flawed system of arbitrarily restoring voting rights to felons and to replace it by April 26, 2018.

It does appear as though the lack of due process (as indicated in the video above, “without any standard”, as indicated by Governor Scott ) of the current arbitrary setup needs to and will be addressed. Amendment 4 would appear to be the reasonable solution to return people’s rights to vote once they have completed their sentences.