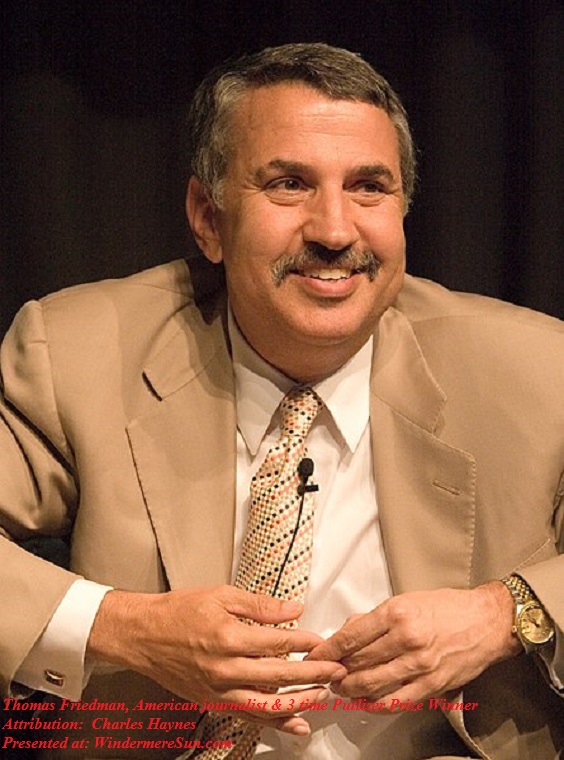 Those of you who are interested in state of affairs of United States and around the world would benefit from checking out one of the very instructive columns of New York Times, Opinion of Thomas L. Friedman (on Foreign affairs, globalization, and technology). Mr. Friedman is an American journalist and three-time Pulitzer Prize winner, known for his long time bipartisanship and optimism. But in recent years, this New York Times columnist Thomas Friedman argues that President Donald Trump is undermining the nation’s democracy. He explains to Lawrence O’Donnell why he can’t find any optimism for the Trump presidency, in the video “Thomas Friedman’s ‘Cod Red’ Warning About President Donald Trump” below:

Friedman states that Trump is violating the norms of  the presidency and violating his oath of office. Furthermore, by not protecting the Constitution, Trump is not only appalling but dangerous and needs to be called out.  After FBI, CIA, and NSA have all testified to Congress that Russia did intervene,  continues to do so, and they plan to continue to do so in the next round of elections. When FBI Director was asked “What had the president instructed you to do?” The FBI Director said, “Nothing.” Friedman claims that a real President of the United States, rather than some one simply moonlights as the president, would have behave much differently. Friedman feels that a real president would have tried to:

Friedman asks, “Where is the Republican Party? Where is the leadership of Republican Party?” He concluded that “…either we have a  president who is compromised by Russia or is such a towering fool who actually believes in what he told us to believe that he asked Vladimir Putin that if he did this, and Putin told him no, and he believes him (Putin) .”