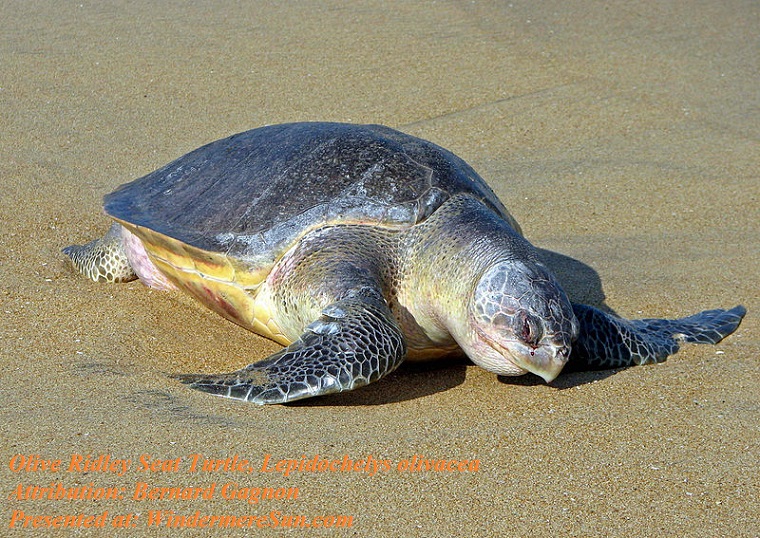 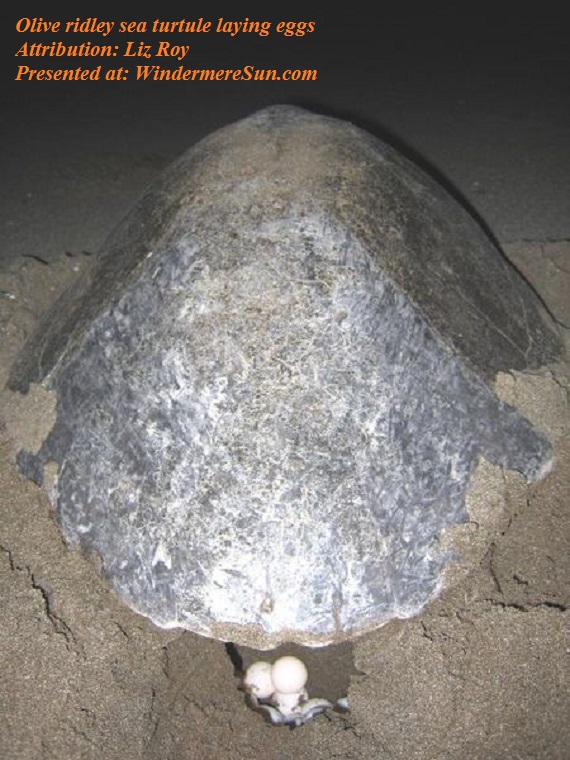 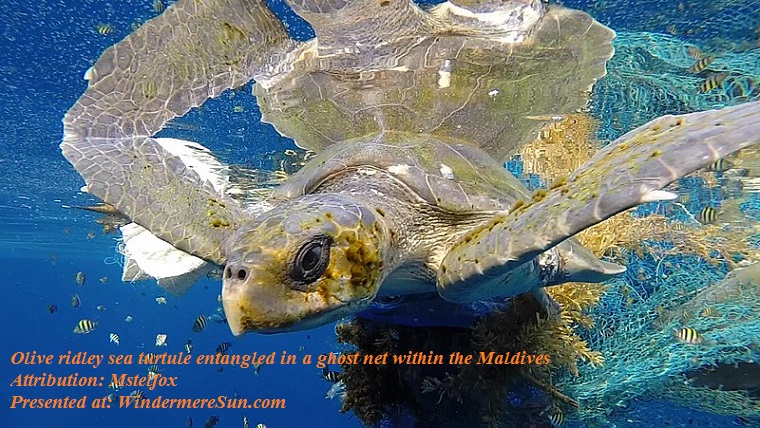 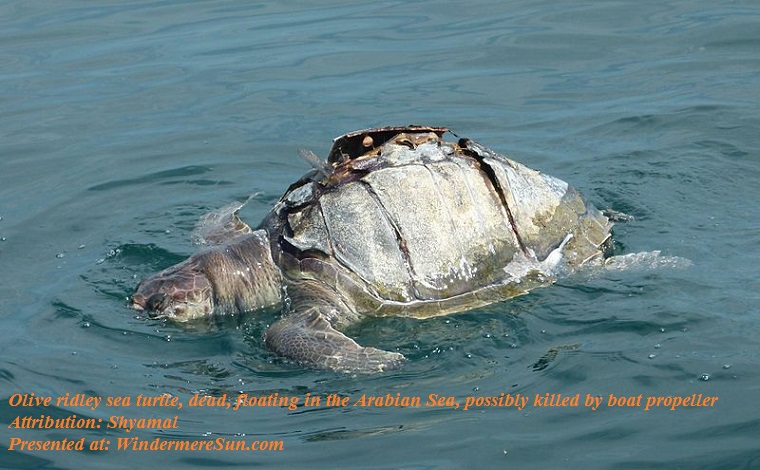 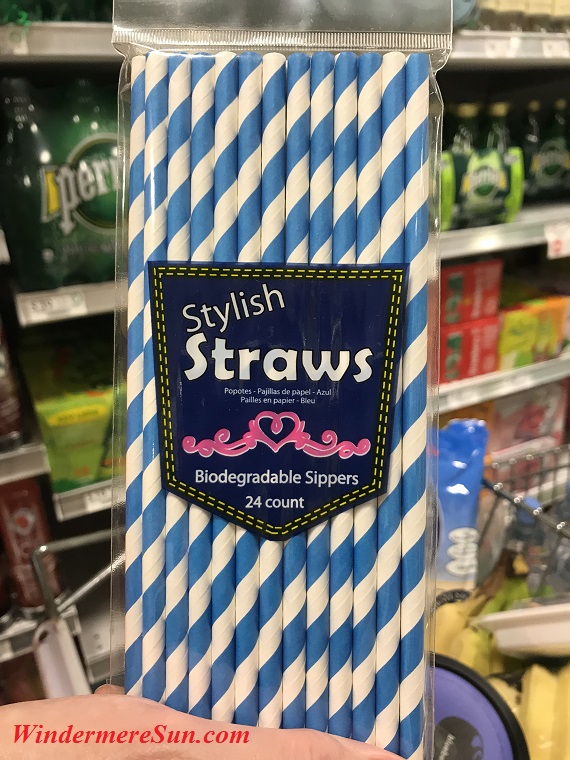 On Tuesday, August 28, 2018, Mexico’s federal agency for environmental protection announced that more than 300  Olive Ridley Sea Turtles were found dead, floating off the coast of the southern state of Oaxaca, as a result of “ghost nets“. Their shells cracked from more than a week of drying under the sun. This news arrived just days after another 113 sea turtles (most of which were also olive ridley sea turtles) washed ashore in Mexico’s Chiapas state about 100 miles East of Oaxaca.

Marine biologist Bryan Wallace said that the sea turtles in Oaxaca may have been caught by “ghost net”.  Excerpt from wikipedia on “Ghost net”, in italics, below:

Ghost nets are fishing nets that have been left or lost in the ocean by fishermen. These nets, often nearly invisible in the dim light, can be left tangled on a rocky reef or drifting in the open sea. They can entangle fish, dolphins, sea turtles, sharks, dugongs, crocodiles, seabirds, crabs, and other creatures, including the occasional human diver. Acting as designed, the nets restrict movement, causing starvation, laceration and infection, and suffocation in those that need to return to the surface to breathe.

From 2000 to 2012, the National Marine Fisheries Service reported an average of 11 large whales entangled in ghost nets every year along the US west coast. From 2002 to 2010, 870 nets were recovered in Washington (state) with over 32,000 marine animals trapped inside. Ghost gear is estimated to account for 10% of all marine litter.

According to the SeaDoc Society, each ghost net kills $20,000 worth of Dungeness crab over 10 years. The Virginia Institute of Marine Science calculated that ghost crab pots capture 1.25 million blue crabs each year in the Chesapeake Bay alone.

In May 2016, the Australian Fisheries Management Authority (AFMA) recovered 10 tonnes of abandoned nets within the Australian Exclusive Economic Zone and Torres Strait protected zone perimeters. One protected turtle was rescued.

Unlike synthetic fishing nets, biodegradable fishing nets decompose naturally under water after a certain period of time. Coconut fibre (coir) fishing nets are commercially made and are hence a practical solution that can be taken by fishermen.

The company Net-works worked out a solution to turn discarded fishing nets into carpet tiles.

Since 2008, the US Fishing for Energy initiative collected 2.8 million pounds of fishing gear, and in partnership with Covanta Energy turned this into enough electricity to power 182 homes for one year by incineration.

A plan to protect UK seas from ghost fishing was backed by the European Parliament Fisheries Committee in 2018. Mr Flack, who led the committee, said: “Abandoned fishing nets are polluting our seas, wasting fishing stocks and indiscriminately killing whales, sea lions or even dolphins. The tragedy of ghost fishing must end.

A WWF-­Pakistan (World Wildlife Fund-Pakistan) trained observer, Amir Rahim, successfully released an entangled Olive ridley turtle about 180 nautical miles from Karachi in the Arabian sea. According to Amir Rahim he has seen many turtles entangled in fishing nets but this was the first time he saw a turtle trapped in a polypropylene (PP) bag, below: Abandoned or lost fishing nets have a major impact on endangered marine wildlife and are also a serious navigational hazard to vessels. The vast majority of the “ghost nets” found in the north of Australia come from foreign fishing activities to the north of Australian waters. Seasonal winds and currents see nets and other marine debris drifting at sea or washed ashore on remote northern reefs, islands and beaches across the top of Australia, below: “Sea Turtle with Straw up its Nostril-“NO” TO PLASTIC STRAWS” below: It appears that the solution is to use biodegradable nets and biodegradable paper straws. It is quite doable. Did you know that Walt Disney is joining the fight against plastic straws? The entertainment and theme park giant announced that single-use plastic straws and stirrers will be eliminated from all of its theme parks, resorts and properties across the world by mid-2019. So, if you are concerned about these marine animals, start a petition to encourage various establishments to switch to using biodegradable nets and biodegradable paper straws. Some times awareness is what is needed for people or businesses or organizations to change.