John Sidney McCain III, An Icon Comes To The End of His Journey On August 25, 2018 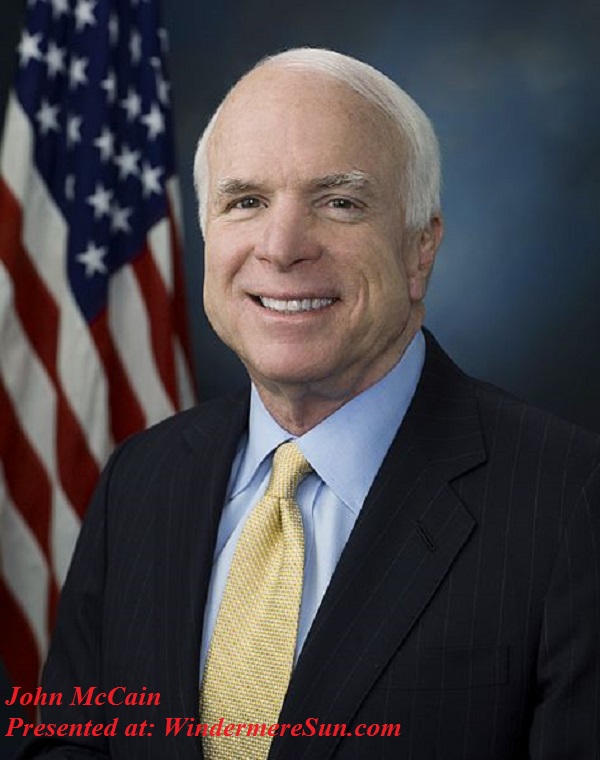 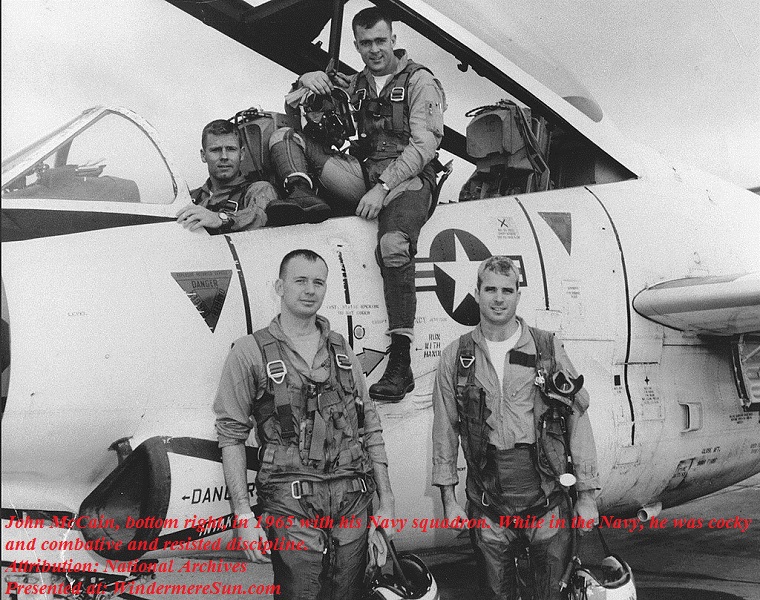 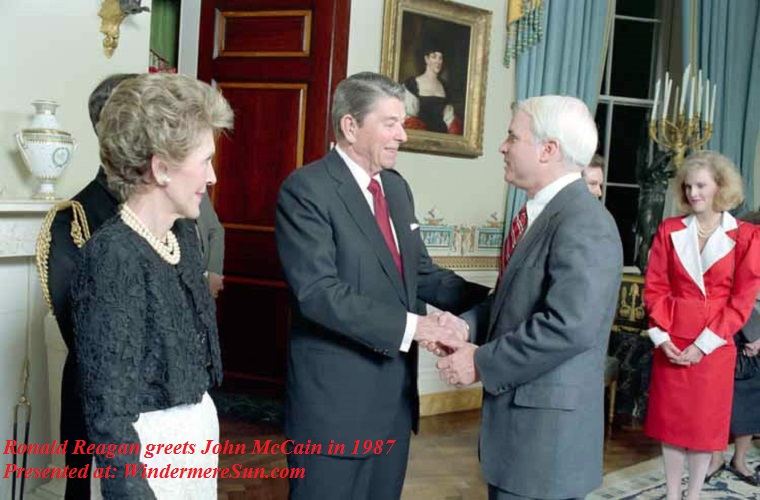 Ronald Reagan and Nancy Reagan in the White House Blue Room, during a dinner for newly elected members of the 100th Congress, greeted John McCain in 1987 (presented at: WindermereSun.com) 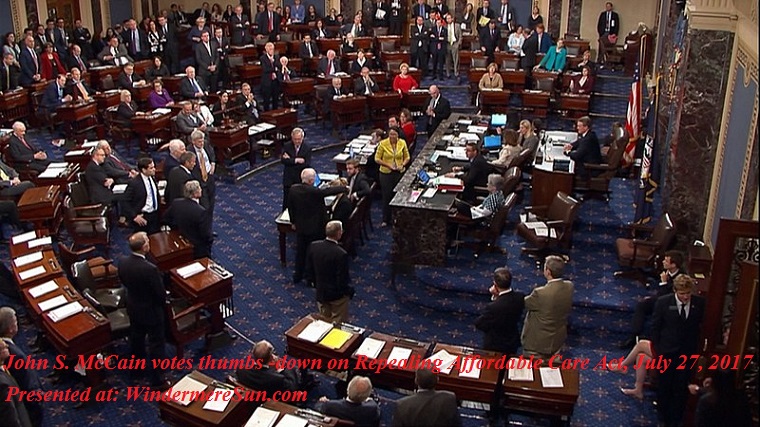 
On Saturday, August 25, 2018, John S. McCain, a war hero, Senator, Presidential contender, passed away at age 81, in his home in Arizona, at 4:28 pm local time. He had suffered from glioblastoma, a malignant brain tumor, for which he had been treated periodically with radiation and chemotherapy since its discovery in 2017.

Despite his weak condition, he made a dramatic appearance in the Senate to cast a thumbs-down vote against his party’s drive to repeal the Affordable Care Act. His endorsement was crucial  on the Republican tax bill in December of 2017.  After debating into early hours of the morning, Senator McCain shocked his colleagues by voting “no” on the “skinny repeal” of Obamacare. CNN’s Brooke Baldwin points out the various reactions across the room, in the video “19 seconds of drama: Reaction to McCain’s vote” below:

John Sidney McCain III (August 29, 1936 – August 25, 2018) was an American politician and naval officer who served as a United States Senator from Arizona from 1987 until his death. He previously served two terms in the United States House of Representatives and was the Republican nominee for President of the United States in the 2008 election, which he lost to Barack Obama.

McCain graduated from the United States Naval Academy in 1958 and followed his father and grandfather—both four-star admirals—into the U.S. Navy. He became a naval aviator and flew ground-attack aircraft from aircraft carriers. During the Vietnam War, he was almost killed in the 1967 USS Forrestal fire. While on a bombing mission during Operation Rolling Thunder over Hanoi in October 1967, McCain was shot down, seriously injured, and captured by the North Vietnamese. He was a prisoner of war until 1973. McCain experienced episodes of torture and refused an out-of-sequence early repatriation offer. The wounds that he sustained during the war left him with lifelong physical disabilities. He retired from the Navy as a captain in 1981 and moved to Arizona, where he entered politics. In 1982, McCain was elected to the United States House of Representatives, where he served two terms. He entered the U.S. Senate in 1987 and easily won reelection five times, the last time in 2016.

While generally adhering to conservative principles, McCain also had a media reputation as a “maverick” for his willingness to disagree with his party on certain issues. After being investigated and largely exonerated in a political influence scandal of the 1980s as a member of the Keating Five, he made campaign finance reform one of his signature concerns, which eventually resulted in passage of the McCain–Feingold Act in 2002. He was also known for his work in the 1990s to restore diplomatic relations with Vietnam, and for his belief that the Iraq War should have been fought to a successful conclusion. McCain chaired the Senate Commerce Committee and opposed pork barrel spending. He belonged to the bipartisan “Gang of 14” which played a key role in alleviating a crisis over judicial nominations.

McCain entered the race for the Republican nomination for President in 2000, but lost a heated primary season contest to Governor George W. Bush of Texas. He secured the nomination in 2008 after making a comeback from early reversals, but was defeated by Democratic nominee Barack Obama in the general election, losing by a 365–173 electoral college margin. He subsequently adopted more orthodox conservative stances and attitudes and largely opposed actions of the Obama administration, especially in regard to foreign policy matters. By 2013, however, he had become a key figure in the Senate for negotiating deals on certain issues in an otherwise partisan environment. In 2015, McCain became Chairman of the Senate Armed Services Committee. In 2017, the year before his death at age 81, he reduced his role in the Senate after a diagnosis of brain cancer.

Sen. John McCain was elected to the House in 1982, serving two terms before successfully running for the Senate, where he represented Arizona for the next 30 years. In this series of interviews, Sen. McCain’s colleagues in Congress reflect on his long career, and service to the country, in the video “John McCain, in the words of his congressional colleagues” below:

Hallie Jackson, Joshua Johnson, Susan Page and David Brody discuss the legacy that Sen. John McCain leaves behind in Washington, in the video “Full Panel: McCain leaves a legacy of humility ad statesmanship” below: Senator McCain appeared on the broadcast 73 times to discuss issues such as free speech, his military service, and his presidential campaigns, in the video “John McCain: Remembering The Maverick” below: Tom Brokaw and Andrea Mitchell look back on years of covering the late Sen. John McCain (R-Ariz.) and what he leaves behind, in the video “Tom Brokaw and Andrea Mitchell remember John McCain” below: Hillary Clinton sits down with CNN’s Dana Bash to share her favorite memories of Senator John McCain, in the video “Hillary Clinton shares favorite memories of John McCain” below: Washington Post reporters Dan Balz, Michael Gerson and Karen Tumulty discuss their coverage of John McCain through the years and what they learned about civic responsibility while covering him, in the video “Who will fill John McCain’s role as the conscience of the Senate” below:
Gathered, written, and posted by Windermere Sun-Susan Sun Nunamaker
More about the community at www.WindermereSun.com